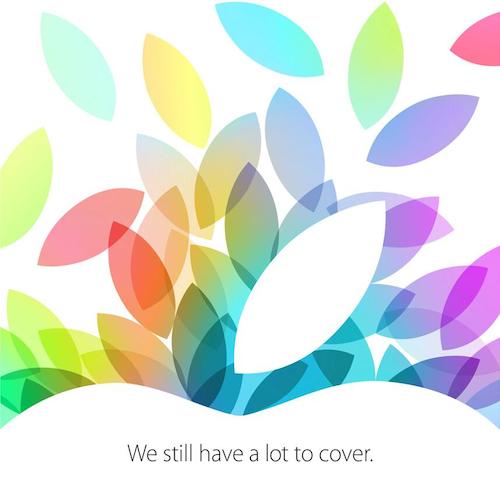 As first reported by All Things Digital, Apple has today sent invitations to selected members of the press for a media event on October 22 at the Yerba Buena Center in San Francisco. The invitation, shared on Twitter by Tim Bradshaw, reads “We still have a lot to cover”.

According to rumors and speculation from recent weeks, Apple will announce updates to the iPad line at the event. In particular, it’s been reported by several rumor sites that Apple will unveil a fifth generation 9.7-inch iPad sporting a case redesign inspired by last year’s iPad mini, and a second generation iPad mini with a higher resolution Retina display. Following the release of the iPhone 5s with Touch ID, A7 processor, and gold color option, Apple has been rumored to be considering these features for the iPad as well, although it’s unclear as to whether Apple could bring them to the iPad or iPad mini. According to 9to5mac’s Mark Gurman, Apple has also been testing a new iPad mini based on the A6 CPU and without a Retina display, which the company could sell as an “entry level” iPad mini.

There are other announcements that Apple is expected to make before the end of the year: the company said earlier this year that it would release the new Mac Pro in the Fall, and announced last month their intention to bring the iPhone 5s to over 100 countries and 270 carriers in 2013. OS X Mavericks, recently released as GM to registered developers, is also expected to get an official release date in the Fall, and it’s possible that Apple will showcase updates to some of its App Store-only apps for iOS 7, such as GarageBand or iWork (the iWork suite was made free last month, but hasn’t been updated for iOS 7).

We’ll be covering Apple’s October 22 announcements with a dedicated hub on MacStories.