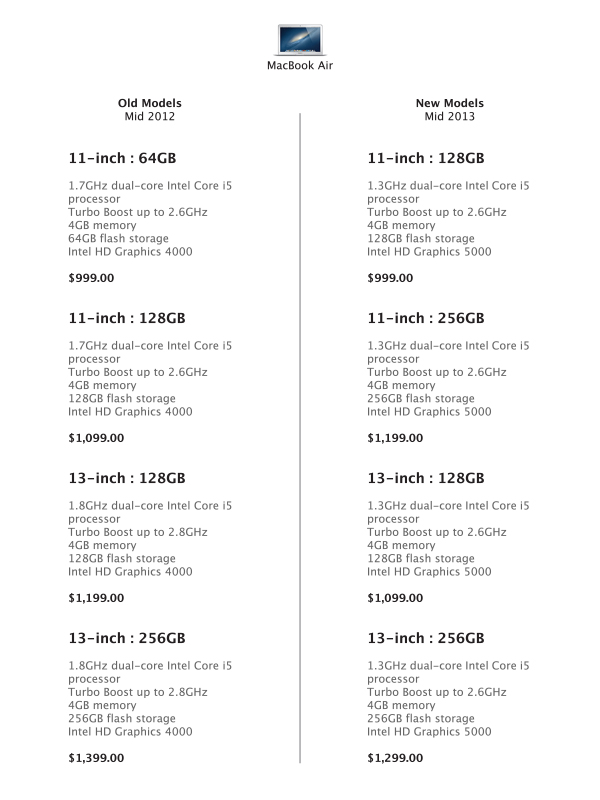 The new MacBook Airs are also equipped with flash storage that’s 45% faster than the previous generation. As for wireless capabilities, 802.11ac Wi-Fi networking is now built in, resulting in 3x faster wireless performance compared to 802.11n at the same distance. 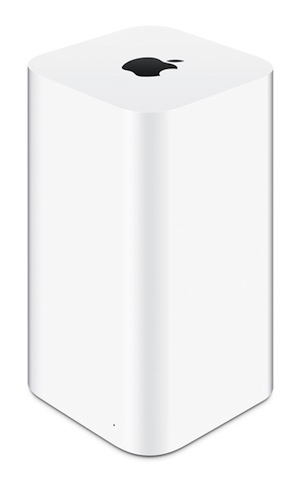 To take advantage of 802.11ac, Apple updated their Airport Extreme and AirPort Time Capsule with fresh designs. Built tall instead of flat and square, the new AirPort base stations take advantage of a beamforming antenna array, which focuses wireless signals in the direction of your 802.11ac capable Macs, iOS devices, and computers. With 802.11ac, you can achieve up date rates of up to 1.3Gbps over a wireless signal.

The new Airport Extreme is $199, and the Airport Time Capsule (which works in tandem with Time Machine on your Mac) starts at $299 for the 2TB model. 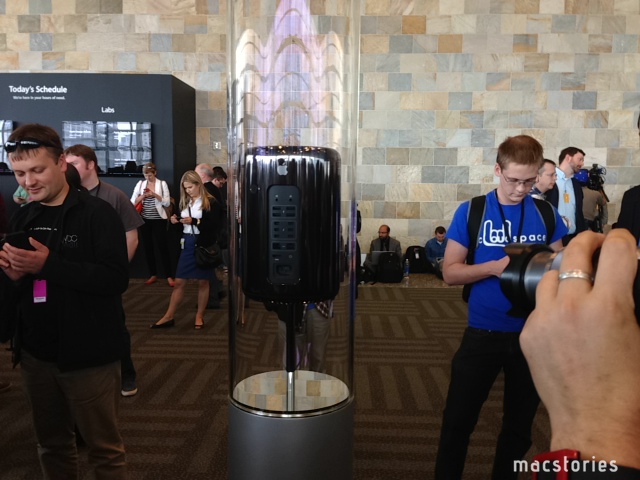 Lastly, Apple showed off their brand new Mac Pro. It’s not available yet, but it was shown in person on the floors of Moscone West.

The new Mac Pro resembles a black cylinder, standing about shin high off the ground. It’s design is stark and sparse, almost resembling a black monolith. All of the components inside the cylinder are packed around a thermal core, which sucks the hot air out the top through a single fan.

The latest Mac Pro features new-generation Xeon processors, meaning the new Mac Pro gets double the performance compared to the previous generation. With up to 12 cores of processing power, Apple promises up to 40 GB/s of PCI Express gen 3 bandwidth, and 256-bit-wide-floating point instructions. Mac Pros come installed with 1866 MHz of DDR3 memory, and up to 60 GB/s of memory bandwidth.

Also a first, the new Mac Pro comes standard with dual GPUs — AMD FirePro workstation class GPUs — with up to 6GB of dedicated VRAM. With these graphics, Apple claims you are able to run up to 3 4K displays off of the Mac Pro. Apple’s PCI Express flash storage is also extremely fast, resulting in 1.25 GBps reads and 1 GBps writes, more than 10x faster than any hard drive in the current Mac Pro.

And the Mac Pro is expandable through 6 Thunderbolt 2 connections that allow up to 6 devices per port. There are 4 USB 3 ports, 2 gigabit ethernet ports, and HDMI out. Advanced wireless is built in as well, so you’ll be getting the same great 802.11ac performance as the MacBook Air and Bluetooth 4.0.

The Mac Pro will be coming later this year and will be assembled in the USA.