The Los Angeles Auto Show is one of the biggest, baddest auto conventions in the world. With all of the innovations and breakthroughs in the auto industry this year, it was the way in which the manufacturers communicated with the audience within the Los Angeles Convention Center walls that was unique. Every car manufacturer that had any serious interest in interacting with their consumers used Apple products. 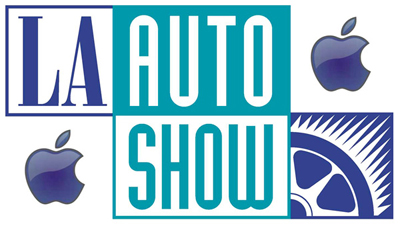 Many young women were holding iPads asking for attendees email addresses and as the post from Cosby Sweaters says, “There might be more efficient ways to retrieve valuable customer contact information, but nothing is more fun and personal than a pretty girl with an iPad.”

Touchscreen displays have been popular at car shows over the past few years and the technology has gotten more popular. Apple has made it easy for exhibitors to effectively and easily integrate touch screen devices in their showroom areas, and the price is relatively inexpensive. Many times iPads were getting more atention that the cars themselves. The iPads (and iPod Touches as well) were being used to show short films, picture gallerys or promote car-based apps.

Some companies, like Nissan, had a space so big that iPads were not big enough so they placed several iMacs with touch-screen capabilties around their exhibiting space. There was even a ‘wall of iDevices’ made for the Lexus booth.

As Cosby Sweaters put is so nicely, “One could say that the touchscreen interface or the tablet won the auto show, but that assumption is completely false. Others tried. Apple still dominated. At General Motors showcases, over-sized Verizon Android phones littered about, illustrating GM car models and OnStar service. These were largely walked past and ignored. Why? Because over-sized Android phones do not exist in the real world and the over-sized buttons surely did not work either. Come back when you are trendy.”