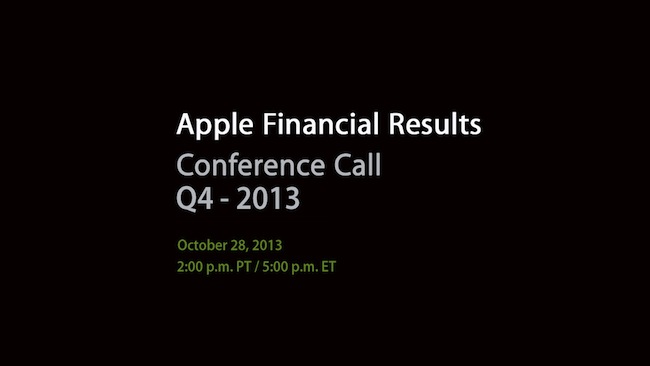 Apple’s fourth quarter earnings report and conference call will take place on October 28th, 2013, according to an Investor Relations update on Apple’s website. At the time of the event, Apple will broadcast the call online.

This year, Apple launched two new iPhones: the colorful iPhone 5c, and the flagship iPhone 5s. During the opening weekend, Apple sold over 9 million new iPhones, compared to iPhone 5 in 2012 which sold over 5 million during its opening weekend. Launch countries included: Australia, Canada, China, France, Germany, Hong Kong, Japan, Puerto Rico, Singapore, the UK, and the US. In their press release, Apple stated that demand for the iPhone 5s exceeded initial supply and that many online orders would be shipped in coming weeks.

In addition to new iPhones, Apple introduced iOS 7, a complete rethinking of Apple’s mobile operating system. Through a simple software update, millions of customers had their iOS devices updated with brand new features such as Control Center, an all-in-one hub for managing common settings and playback controls, visual multitasking, and automatic updates that ensure apps are always current and up-to-date. You can read our thoughts on iOS 7 here.

Apple also added iTunes Radio to their content ecosystem, which features: first plays of upcoming albums, collaborations with artists, customized radio stations based on songs, and an ad-free listen for iTunes Match subscribers. iTunes Radio helps listeners discover a variety of new music based on their musical interests, favorite artists, and listening habits.

While Apple has not made any announcements, the company is expected to reveal new iPads and iPad minis later this month, launching the products in Q1 for 2014 to kick off the new fiscal year. If and how the company will update the iPod lineup remains to be seen, but my guess is that things will stay the same this year, since the iPod lineup received a Space Gray color option shortly after the iPhone 5s and iPhone 5c were announced. As for Mac updates, I could see Apple revealing a launch date for its Mac Pro at the iPad event, but I expect silent spec bumps for everything else.

We will provide live updates from the conference call on our site’s homepage on October 28th starting at 2 PM PT.