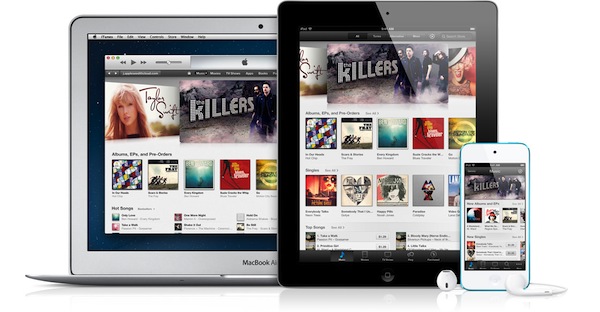 Apple hasn’t forgotten about the iPod or iTunes, announcing Wednesday a new iPod touch and a new iPod nano.

After the iPhone’s introduction, Tim Cook brought on Eddy Cue to talk about iTunes, introducing it as the #1 music store in the world, with over 200 million customers using iTunes, worldwide availability in 63 countries, and over 26 million songs available. “Two thirds of our downloads come from iOS,” Cue said on stage, while showing off brand new iTunes and App Store designs on the iPad, then on the iPhone 5. Launching September 19th, the visual refresh brings better performance when browsing through the store, and also includes the ability to preview music browsing and share store links with friends. 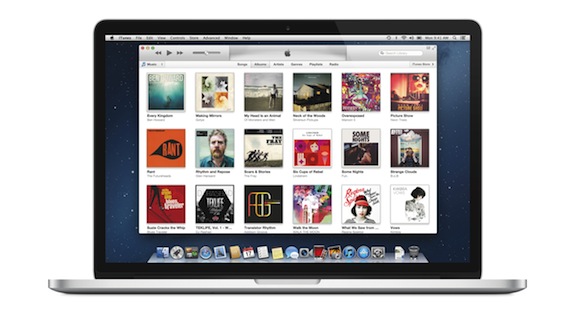 Apple also showcased an updated iTunes application for OS X, which features a new edge-to-edge design that looks similar to the iPad’s refreshed music app as of iOS 5. Album art flows across the display — clicking on an album expands album info as opening a folders does on iOS. iTunes also brings popovers that present a drop down of upcoming songs, and improved search results as you filter through music in your library. Cue also showed off a brand new mini-player design, which unlike previous designs, shows album artwork and gives the option to manage playlists and see upcoming songs as well.

More and updates past the break!

Music isn’t the only focus of the iTunes ecosystem, however. Even the movie library follows similar conventions, presenting movie covers in the same grid format (how you view your library can be personalized of course). The demo ended with a quick run through of an updated iTunes Store, which isn’t much different look than its iOS siblings.

Greg Joswiak, on stage next, announced that the iPod is the most popular music player of all time, selling 350 million iPods total. 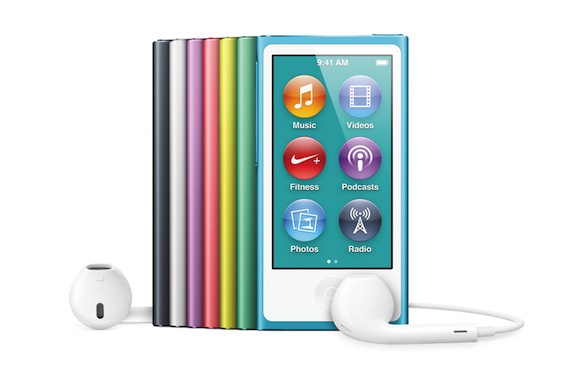 First up was the iPod nano: it’s larger in size, features a 2.5 inch 240 x 432 resolution display at 202 PPI, is only 5.4 mm thin (38% thiner than the previous nano), and looks very similar to an iPod touch. Instead of square icons on the interface, Apple has opted for round buttons and multi-touch gestures to differentiate it from the iPod touch and the iPhone — building upon the previous implementation of a barebones iOS experience. It’s the most interesting surprise of the day. Video is coming back to the iPod nano, alongside an FM tuner, the addition of Bluetooth 4.0, and Apple’s Lightning connector. Plus, it comes in multiple colors with your choice of a black or white face. 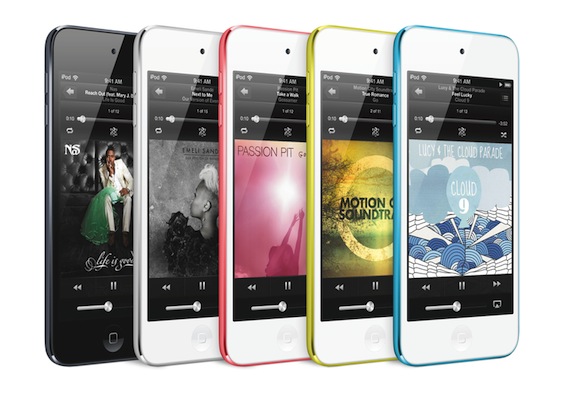 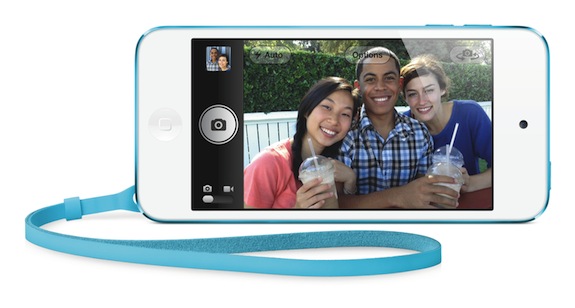 The iPod touch is updated with Apple’s A5 chip, which brings dual-core processing, a CPU that’s twice as fast as the previous generation, and has dual-core graphics. The camera has finally been overhauled — unlike previous generations, the iPod can now can take beautiful 5 MP pictures (there’s LED flash too), and like the iPhone 5, can also take panoramic photos. The front facing camera is HD, while the rear iSight camera can record video in 1080p. An accessory announced for the iPod touch, specifically for use with the camera, is a new wrist strap called the iPod touch loop (Apple presented the iPod touch as your new point-and-shoot camera of choice). The iPhone 5’s WiFi capabilities have found its way into the iPod touch, with AirPlay mirroring and Siri being introduced to the line for the first time. Also new for the iPod touch line: colors. To wind down the specs, you’ll get 8 hours of video playback, and 40 hours of music playback on the new iPod touch. (For comparison to the iPhone 5, check out our iPhone 5 coverage.) 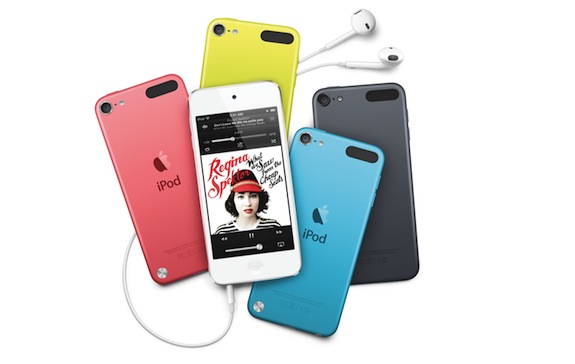 Last but not least, Apple introduced a new pair of earphones called EarPods. Included with the new iPhone 5, iPod touch, and iPod nano, the EarPods feature a more comfortable design, and will also ship as an accessory starting today.

The new iPods will be available for pre-order beginning on Friday, September 14th.

We can’t be at the event, but there are plenty of others who’re getting hands-on and taking lots of pictures. Want to see what the new iPods look like in-hand? Be sure to visit these sites below:

Below, we’ve included Apple’s press release for the new lineup of iPods for 2012.

“With over 350 million sold, iPod is the world’s most popular and beloved music player,” said Philip Schiller, Apple’s senior vice president of Worldwide Marketing. “Music lovers may have a difficult time deciding between the reinvented iPod nano, the thinnest iPod ever, and the all-new iPod touch with its stunning 4-inch Retina display, 5 megapixel iSight camera and ultra-thin design—both in beautiful new colors.”

The new iPod touch has been redesigned with a brilliant 4-inch Retina display in an ultra-thin and light anodized aluminum body—the thinnest iPod touch ever at just 6 mm thin and weighing just 88 grams. With Apple’s dual-core A5 chip inside, iPod touch delivers up to twice the processing power and up to seven times faster graphics than the fourth generation iPod touch, all while maintaining incredible battery life of up to 40 hours of music playback and up to eight hours of video playback.* And, for the first time ever, iPod touch is available in five vibrant colors.

The new iPod touch includes a 5 megapixel iSight camera with autofocus, support for 1080p video recording with video image stabilization, face detection and an LED flash, and the new panorama feature that lets you capture gorgeous panoramic photos by simply moving the camera across a scene. Every new iPod touch comes with a color-matched iPod touch loop, a clever and convenient wrist strap you can use while taking photos, recording video and playing games.

The new iPod touch comes with iOS 6, the world’s most advanced mobile operating system with over 200 features, and for the first time, features Siri, the intelligent assistant that helps you get things done just by asking. Siri arrives on the new iPod touch with support for more languages, easy access to sports scores, restaurant recommendations and movie listings.** The new iPod touch also includes: built-in Facebook integration with ability to post directly from Siri; Shared Photo Streams via iCloud®; and other key iOS features like iMessage™, FaceTime®, Mail and Game Center. Now you can wirelessly display your iPod touch screen right on your HDTV with AirPlay® Mirroring, allowing you to stream photos, videos, music, apps and play games on your big screen TV.***

The reinvented iPod nano is the thinnest iPod ever, at just 5 mm, and features the largest display ever built into an iPod nano, allowing you to enjoy more of your music, photos and widescreen videos. The new iPod nano features a 2.5-inch Multi-Touch display to make navigating your music even easier; a home button to quickly get back to your home screen; and convenient buttons to easily control volume and quickly play, pause or change songs without looking. The new iPod nano gives music lovers built-in Bluetooth for wireless listening with Bluetooth-enabled headphones, speakers and cars. At 30 hours, the new iPod nano offers the longest music playback of any iPod nano so you can enjoy your playlists* and FM radio even longer. With built-in fitness features including a pedometer and support for Nike+, iPod nano users will be ready to take their music walking, running or anywhere they like. The new iPod nano comes in seven gorgeous new colors with fun color-matched wallpapers.

With the App Store℠ on iPod touch, users have access to the world’s largest and best collection of over 700,000 apps, including over 175,000 game and entertainment titles. Customers also have the iTunes Store® at their fingertips, giving them instant access to the world’s largest catalog of over 26 million songs, 190,000 TV episodes, 45,000 movies and 1.5 million books to purchase and download directly to their iPod touch.

Both iPod touch and iPod nano come with the new Lightning™ connector that is smaller, smarter and more durable than the previous connector. The all-digital Lightning connector features an adaptive interface that uses only the signals that each accessory requires, and it’s reversible so you can instantly connect to your accessories. The Lightning-to-30-pin Adapter is also available to connect iPod touch and iPod nano to legacy 30-pin accessories.****

* Battery life depends on device settings, usage and other factors. Actual results vary.
** Not all features are supported in all countries.
*** AirPlay Mirroring is only supported on the fifth generation iPod touch.
**** Sold separately.