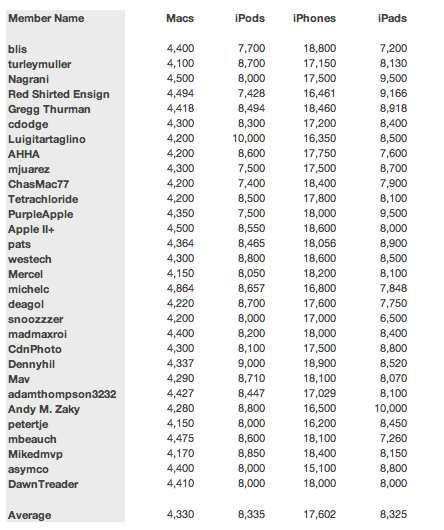 According to the latest estimates by amateur (non-Wall Street) Apple analysts at The Mac Observer’s Finance Board as relayed by Philip Elmer-DeWitt at Fortune, Apple is on track to sell more than 8 million iPads and 17 million iPhones in the third fiscal quarter of 2011. Apple has confirmed that the Q3 2011 financial results will be announced in two weeks, on July 19, and Wall Street’s consensus already claims “the company earned $5.69 per share on sales of $24.67 billion”.

According to the Finance Board (which, among the polled members, includes Horace Dediu of Asymco), Apple will post revenue of $26.5 billion with a 69% year-over-year growth, as outlined in two different reports by Paul Leitao at Posts at Eventide.

In Q2 2011, Apple posted revenue of $24.67 billion, with 4.69 million iPads, 18.65 million iPhones and 3.76 million Macs sold. Overall, the company posted quarterly revenue growth of 83% and profit growth of 95%. For the third quarter, the Apple Finance Board estimates the Mac’s sales will be consistent with the platform’s recent growth, whilst as far as the iPad 2 goes, Apple’s ability to meet demand (following the alleged supply issues due to the Japan earthquake and tsunami) will play a key role in determining a growth for the device’s sales up from roughly 5 million in Q2. As for the iPhone, Leitao writes:

We will know more on July 19, when Apple is expected to post the official financial results for Q3 2011.