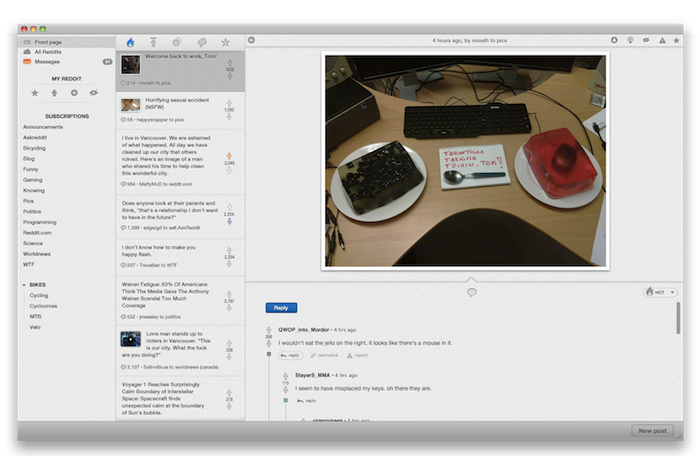 Alien Blue, the popular Reddit client for iPhone and iPad, is coming to the Mac with a native version that will be released on the Mac App Store. For those who haven’t tried Alien Blue, it’s an unofficial Reddit application that’s been very successful on the App Store thanks to its clean design, possibility to create shortcuts for subreddits (categories) to reduce the number of taps to navigate the website, as well as inline media viewing for pictures and video, undoubtedly a huge part of Reddit’s success. Alien Blue for iOS (an app that I’ve personally enjoyed using over the past months), is a full-featured Reddit client with login features to check on your Reddit account and leave comments, Read It Later, Instapaper and Readability integration and many more functionalities including a “search” feature to look into Reddit’s archive of posts.

The Mac version of Alien Blue, teased on the app’s website today, looks very elegant and falls in line with the iOS counterpart’s minimal, yet powerful approach to the social sharing / commenting website. Alien Blue for Mac will have a three-panel interface with a column on the left to switch between front page, subreddits and your account’s sections. The mid panel will be used to scroll posts, or check on your messages and notifications. The right panel, the larger one, will allow you to see the actual posts, images and videos. As you can see from the screenshots, everything will be reformatted and redesigned to fit Alien Blue’s aesthetics and color scheme. From a first impression, the app seems to be slightly inspired from Reeder, Sparrow and OS X Lion in general in the way it makes use of monocrome icons, large rounded buttons and a compose window similar to the one seen in the alternative mail client. It looks very intriguing overall, but of course some things may change come the final release. 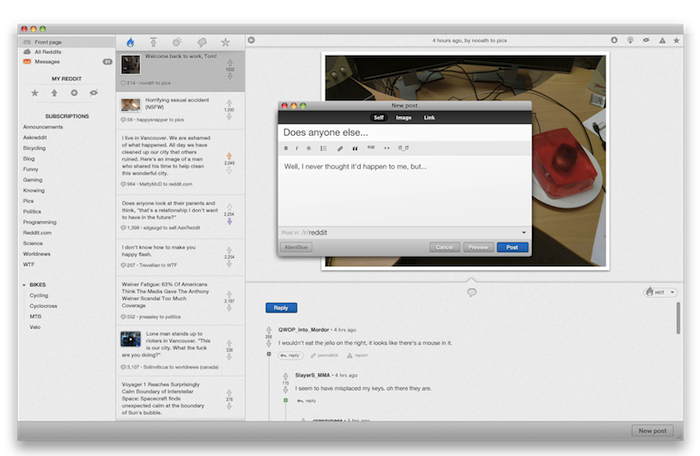 The developer also writes on the website Alien Blue for Mac will integrate HTML5 technology for YouTube and Vimeo videos, implement Readability to elegantly lay out webpages, and folder for groups of subreddits.