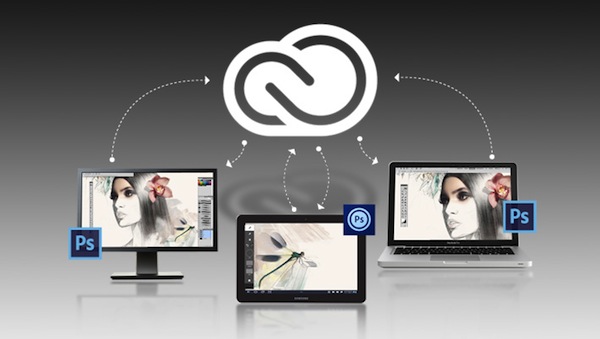 This morning, Adobe officially launched Creative Cloud, the company’s new subscription-based service that gives users access to CS6 applications, Touch apps, and other tools for a monthly fee. Described as a “digital hub” to download apps, access online services, and share files, Creative Cloud comes with various online storage options to store files directly on Adobe’s servers and access them at any time from connected apps, such as the Touch ones released or updated today.

Creative Cloud starts at $29.99 per month with a one year contract for qualified customers (all registered users with CS3 or later); standard pricing, as detailed in the image below, starts at $49.99 per month with a one year contract, or $74.99 per month with no contract required. Unsurprisingly, Adobe maintained the same pricing scheme for European customers, with subscriptions starting at €29.99, €49.99 and €74.99. The Adobe Touch Apps, available on the App Store, will give users with an Adobe ID one free month of Creative Cloud with “2GB of cloud storage plus the ability to sync between tablet and desktop, access files from the web, and easily share with others.” 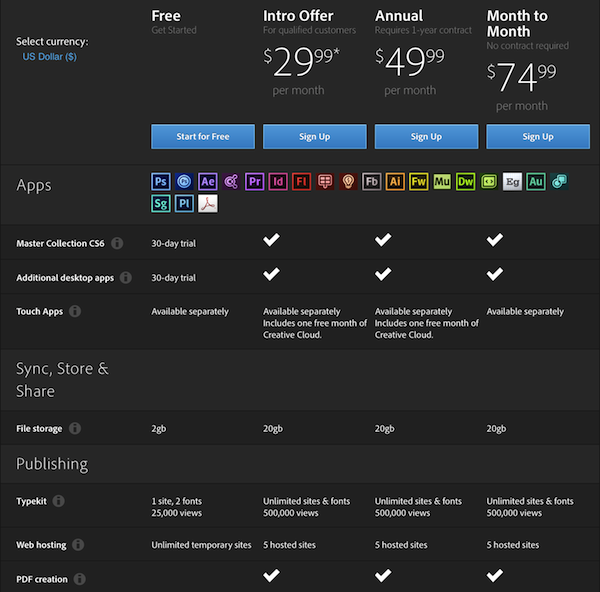 Adobe Photoshop Touch 1.2: Updated this morning, version 1.2 of Photoshop Touch for iPad still doesn’t come with Retina-ready graphics or application icon. Instead, Adobe focused on fixing a few bugs, and bringing some new functionalities to the app, which is now capable of connecting to Creative Cloud. Photoshop Touch now comes with two new tutorials, four new effects (Watercolor Paint, HDR Look, Soft Light and Soft Skin), and options to export as PSD or PNG to the Camera Roll or via email. Images can be transferred to the desktop via iTunes, and the app automatically syncs with Creative Cloud to import compatible files stored online. The default resolution is still 1600 x 1600 pixels, but a new optional 2048 x 2048 pixels setting is also available.

Adobe Photoshop Touch is available at $9.99 on the App Store. Check out our review here.

Adobe Ideas is available at $9.99 on the App Store.

Collage lets you create interactive “moodboards” that combine images, text, drawings, videos, and web clips in a single image you can then share or open into other Adobe apps. To my surprise, the first version 0f Collage does have Retina graphics, but the app’s icon hasn’t been updated for the new display, and ink – not text, just virtual ink for drawings – looks fuzzy on the new iPad. Everything else is Retina-ready, from backgrounds and palettes to text and other controls. 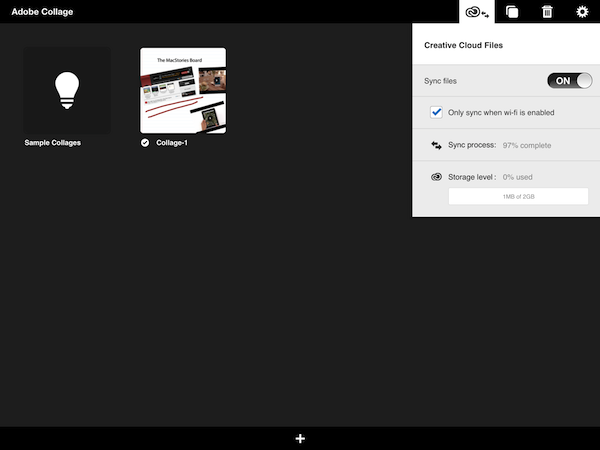 Collage gives you a blank canvas that can contain different types of media. Unfortunately, the app’s sharing capabilities are fairly poor as only JPEG is supported (and there are no settings to adjust output quality), but at least Adobe implemented an “Open In…” menu called “Share with Others” that lets you send a Collage image to other installed iOS apps. Collages can have a background color or pattern, but you can’t import your own background images from the Camera Roll.

In Collage, you can type text, move images around, draw with pen tools, and import playable videos from YouTube. From a creation and direct manipulation standpoint, the app is very interesting, as you can easily get an image from Flickr or Google, drop it into the canvas, and adjust it with a two-finger gesture. The app has some basic layer management capabilities with ” send to back” and “bring to front” options to control the way elements are placed on top of each other. You can open a  built-in web browser and take a snapshot of any webpage to insert into the canvas, a feature that could make Collage a decent solution for those who build websites and want to share annotations with a team. For images and web snapshots, a “Source” option available in a contextual menu always displays the original URL, which can be opened in Safari. 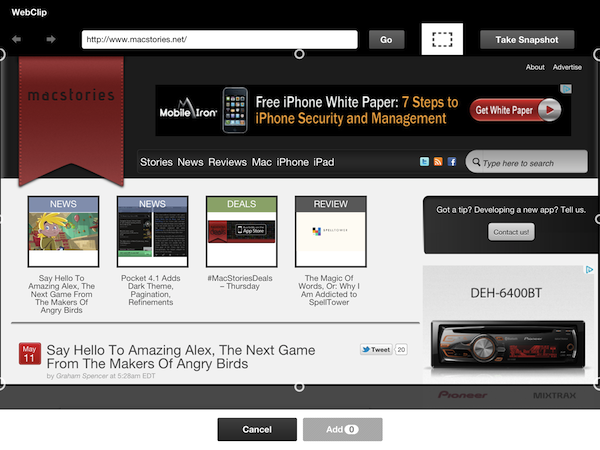 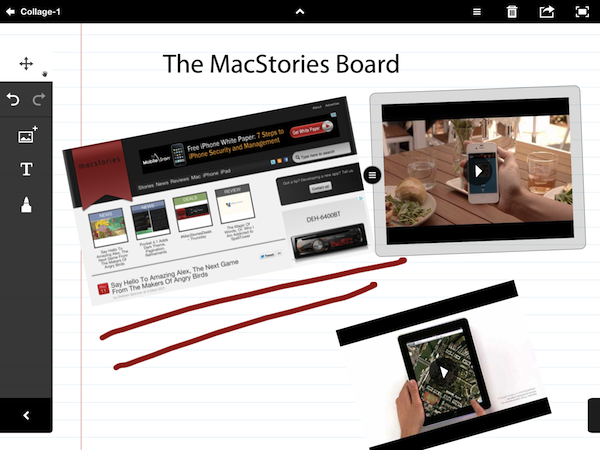 Typed text can be manipulated with two fingers as well, or double-tapped to open a dedicated text editing view with keyboard access and font controls. Here, you can adjust the color, choose a font, increase or decrease size, and set an alignement. 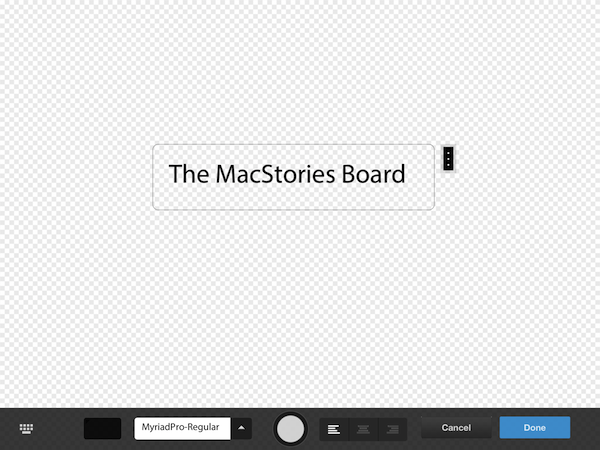 What really impressed me about Collage is support for YouTube videos. With a built-in search option, you can search for any video on YouTube, and drop it into the canvas as a playable thumbnail you can move around and resize. The thumbnail preview is fetched directly from the video, and tapping on a play button will make the video “come forward” with a nice animation that opens the standard iOS video player. 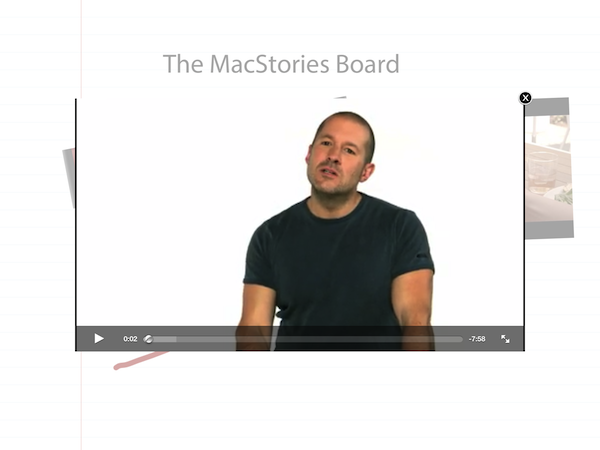 Collage files, like other documents created from Touch apps, can be accessed from the web interface for Creative Cloud, which features some basic options for file management (it’s got drag & drop for uploads, but files need to be moved around and between folders with contextual menus), and allows you to create public links for your documents. Interestingly, Creative Cloud automatically grabs the color profile of a Collage board, with links to download the associated ASE file or visit Kuler. By tweaking a few settings, any file can be downloaded or commented on. 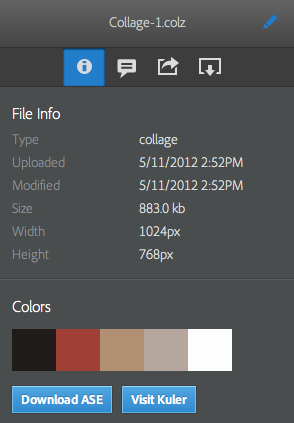 Overall, Collage 1.0 features decent performances on the new iPad and some intriguing media capabilities to build interactive moodboards that, I presume, people will use in lots of different ways.Looking forward to full Retina support and better virtual ink, Collage is $9.99 on the App Store.