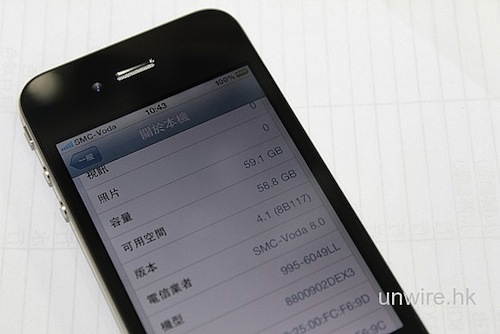 Take this with the proverbial grain of salt, but as noted by M.I.C. Gadget it appears that a series of iPhone 4s with capacity of 64 GB have been put on sale in grey markets of Hong Kong. The sellers are claiming these are “engineering prototypes” snatched directly from Apple in some way, running iOS 4.1 build 8B117 and carrying a lot of XXXs where the model numbers are ID should be.

According to Unwire.hk, this suspicious 64GB model has started selling in Sin Tak, the greatest grey market in Hong Kong, and the sellers claimed that these are engineered models and available in small quantity.

Do we believe this? Personally not so much, but I wouldn’t be surprised to know someone in mainland China managed to get a 64 GB prototype (which it’s very likely Apple has been testing for years) and put it on sale. What about the “small quantity” though? Did they really get multiple prototypes from a single source? Might as well be fake, considering how Apple could easily block and wipe these units remotely.

Still, a 64 GB iPhone would be great.