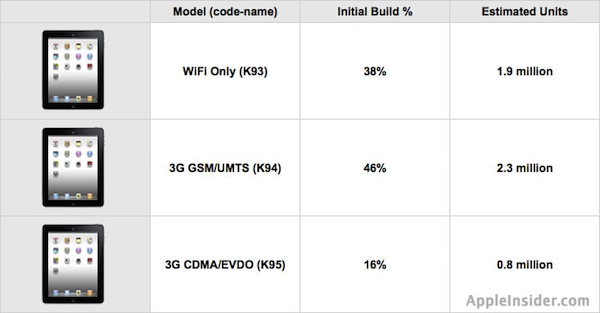 According to AppleInsider, a new report by analyst Ming-Chi Kuo of Concord Securities details the amount of different iPad 2 models that will be shipped in the “first wave” of the device’s introduction.

According to the report, 60% of these units will be 3G-enabled models, either GSM/UMTS units or iPads capable of running on CDMA/EVDO networks.

In speaking to AppleInsider, Kuo said his checks in the Far East indicate production figures of 38 percent for the K93 WiFi model, 46 percent of the K46 3G model, and 16 percent for the Verizon-compatible K95 CDMA version. This indicates that Apple apparently expects most iPad 2 users will opt for 3G models, even on Verizon where new iPhone buyers have the option to pay $20 for hotspot service through their new smartphone.

Last week, Ming-Chi Kuo claimed the iPad 2 won’t have a Retina Display but an anti-reflection screen similar to Amazon’s Kindle, iPod touch-like cameras and a faster processor. Right after the official announcement of the Verizon iPhone, a report suggested Verizon would start selling an iPad “that can connect directly to its network” soon. DigiTimes also reported the 60% of iPads shipped during the December timeframe were 3G models.

On a side note, iPad owners that also have an iPhone will soon be able to share an internet connection through their phone to the tablet thanks to the Personal Hotspot functionality that will be introduced with iOS 4.3. Undoubtedly, the ease of use of Personal Hotspot will make unnecessary for some to upgrade to a WiFi + 3G iPad model. It is unclear, though, how many carriers will support Personal Hotspot on launch.