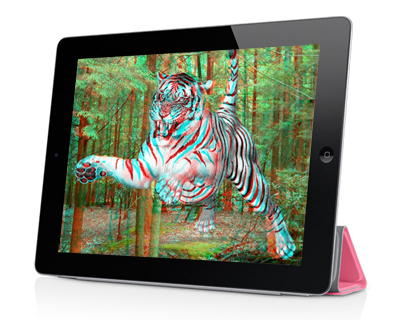 There are suggestions by RCR Wireless that the next-generation iPad will incorporate 3D technology in its display. Claiming to have multiple sources confirming the information, from a Hollywood insider to a Foxconn worker, they write:

The fact that the iPad 3 is 3D is a dead cert, one Hollywood insider close to the big movie studios told RCR, adding that the screen would be the real magic. She went on to say that the big film studios were currently running around like blue arsed flies trying to gear up to release plenty of 3D content in time for Apple’s next launch.

It certainly sounds a little bizarre that Apple would adopt the 3D technology, which at this stage seems little more than a fad. But then again, Apple has a number of patents covering 3D technology which range from dual-camera’s to develop 3D images, head-tracking to create 3D illusions (recently demoed) to glasses-free stereoscopic 3D displays.

In fact earlier this year there were reports of a glasses-free 3D display coming to the next-generation iPod Touch. That rumour would see the iPod Touch be similar to the recently released Nintendo 3DS which also makes use of a display which can create the 3D illusion without the necessary glasses. Current 3D displays have mostly been limited to TVs, with few if any mobile devices choosing to utilise the technology. The biggest problem so far has been trying to create a 3D image that is believable without glasses and the 3DS received mixed reception to its implementation.