Over the years I’ve tried many solutions to make the default OS X file manager, Finder, better and more suitable to my needs: PathFinder, a 3rd party application that can live on top of Apple’s Finder and brings dual-pane navigation and tabs to the mix, plus some custom Applescript and Automator workflows that allowed me to easily perform certain tasks like “move these files to another location” or “copy newly downloaded files with .pdf extension in Dropbox”.

None of the aforementioned apps and scripts managed to work for me for more than a month. I grew tired of them, and most of all I grew tired of PathFinder living as a layer above Finder, but not really replacing it. I even tried to completely replace Finder.app in CoreServices, you can guess how it ended. I wanted a better Finder with dual-pane navigation and tabs, but I also wanted to be able to tweak it and customize it, yet retaining the stability and efficiency of the default Finder.app. I didn’t want a standalone app, I was looking forward to something that would let me modify the native app without replacing it. A few weeks later TotalFinder by BinaryAge came out (as an alpha build) and I immediately started testing it.

A year later, here we are with a final 1.0 build of TotalFinder and months of reinvented workflow to talk about. TotalFinder reinvented the way I interact and work with OS X so much that I cannot imagine going back to Apple’s default file manager anymore. 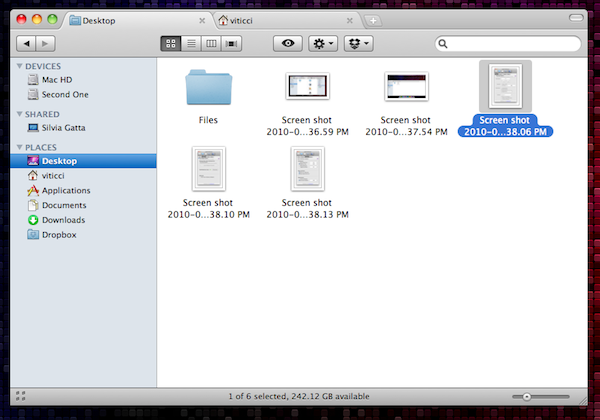 TotalFinder 1.0 is stable and fast: the developer spent months going through every crash report users submitted, trying to find the best (and most reliable) way to make the app work. In case you never tested TotalFinder’s alpha and beta builds, here’s a brief explanation: it’s basically a Finder with tabs, dual-pane navigation, Visor mode and lots of tweaks. It uses Google Chrome’s open-source tabs implementation, but those tabs have been tweaked to fit the look of OS X better. Other features include a setting that prevents the creation of annoying .DS_Store files, the possibility to show system files and “folders on top”. TotalFinder is a complete revamp of the Finder. It definitely isn’t an app for casual users: it’s an advanced tweak (yet pretty simple to set up) for all those who’ve always been wondering whether the Finder could be extended or not. Yes, think of it as one hell of an “extension”.

I switched to TotalFinder in January and haven’t looked back. I only had an issue with a failed upgrade that forced me to run a permission repair from Disk Utility in recovery mode, but the developer fixed it in 48 hours with an update - haven’t had any problems since then. TotalFinder now works like a charm and it takes a couple of minutes to install. All you have to do is download the installation package and run it like you’re used to, then TotalFinder will install itself alongside to the default Finder. On first run you’ll get a customized Finder dock icon and a new menubar item, but you can turn them off by accessing TotalFinder’s preferences which live in an additional tab next to the Finder’s default prefs. Just open a new Finder window, hit CMD+, and start customizing the way TotalFinder should work for you.

The two main features of the app are tabbed navigation and dual-pane mode: there’s not really much to explain, as they work like you expect. A new tab is invoked by the standard CMD + T shortcut, while you can trigger the dual-pane mode with CMD + U. Tabs work just like in Google Chrome, and the active one is integrated with the default Finder toolbar just like a Chrome tab is integrated with the Omnibar and the bookmarks bar. It looks very nice in my opinion, take a look at the screenshots below to see. The only major gripe I have with TotalFinder’s tabs is that they break the screenshot taking full-window Cmd + 4 + spacebar shortcut. I hope it’ll get fixed in a future update. The obvious advantage of having a tabbed Finder is improved and faster navigation between folders: you can drag & drop files from one location to another in seconds, and tabs support spring-loading. If you combine tabs to dual-pane mode, it’s like having at least 3 Finders in a single, native and responsive window. I like the fact that dual mode takes the current tabs and automatically splits and restores them, with no configuration needed. Exiting dual mode simply puts the tabs back in a single Finder mode. 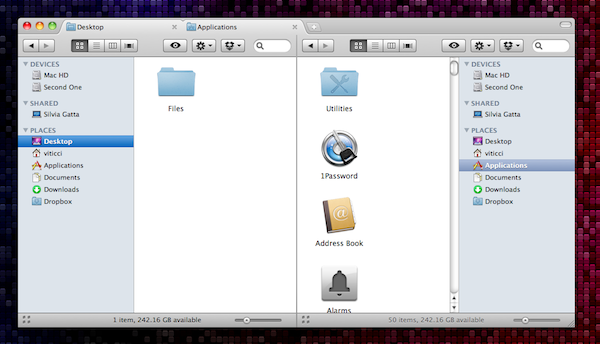 I just can’t think of going back to a single-window Finder: my workflow of constantly downloading files and dropping them into Dropbox has seriously improved over the past months, plus I don’t have to mess with dozens of open windows anymore. Yes, the app is pretty reliable even with 15 tabs - but I don’t need more than 5 at the same time. Still, if you want to create multiple windows instead of tabs - just drag a tab out of the current window (again, like in Chrome). Last, you can assign different views (icon view, list view, etc.) to each tab - but I don’t really use this feature much as I’m a huge icon view fan.

Overall, tabs and dual-pane mode have immensely helped in refining my workflow and making file management a faster experience. I’m pretty sure, though, that many of you will find the Visor interesting, even though I don’t use it that much. Visor is a system-wide TotalFinder window that you can open with a keyboard shortcut and that slides from the bottom to go up above the Dock. Inspired by BinaryAge’s Visor for Terminal, Visor for Finder comes in handy if you’re that type of user who never leaves the keyboard and can’t stand using the mouse even to launch the Finder. Like I said I don’t use the Visor option much, but I have to admit it’s quite useful to be able to invoke the file manager with a quick shortcut. 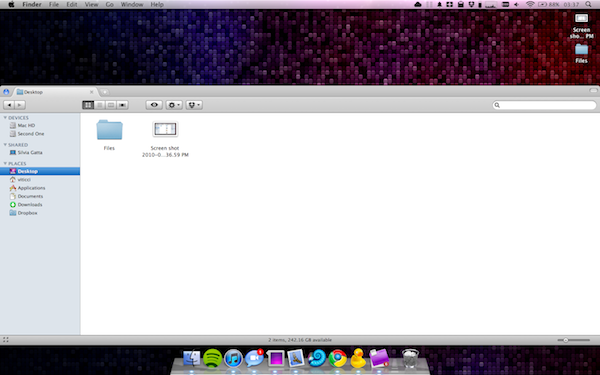 The best thing about TotalFinder is that, yes, it’s advanced and highly customizable with its tons of options and shortcuts, but it retains the simplicity of the original Finder by just letting you choose to enable tabs and dual mode. If you don’t want to mess with the Visor and .DS_Store files, you don’t have to. TotalFinder augments the Finder and improves its functionality, but it doesn’t overwhelm you with absurd requirements and obscure how-tos to make the thing work. In case you’re wondering, many improvements are on the way for future releases.

I switched to TotalFinder months ago and haven’t looked back. This is what the Finder should have been in the first place, and I can’t help but recommend this app to everyone who’s new to the Mac platform or wants to see what serious file management feels like. At $15 with 14-day free trial, you have to download TotalFinder right now. It simply makes everything better, faster, and easier.