Many of us thought Apple would never announce an App Store for Mac. When we discussed the subject, the most frequent reaction I heard from developers was:

That is going to change. Like it or not, Apple wants to make the process of finding and installing software on the Mac easier, faster and integrated, and by bringing the system created on the iPhone and refined on the iPad back to the Mac, they’re going to literally reinvent the wheel.

The Mac App Store leads the way to OS X Lion, but Apple is actually looking forward to launching it on the current version on OS X within 90 days, with app submission for developers starting in November. Before we delve deeper into the matter: no, the Mac App Store won’t be the only way to install software on a Mac. But it’ll quickly become the most popular one.

No need to tell you why this is a huge deal: Apple doesn’t want to change the rules in Lion, they want to change the way you install Mac apps on all versions of OS X, and make you feel more comfortable with it once Lion ships. Admittedly, the concept has been grabbed from iOS and Lion will surely give more sense to it (more on this later), but this is not the main point: what Apple is trying to achieve here is a complete change in how you’re used to discover new desktop apps.

Is this just about the money? Maybe. Just like on iOS, Apple takes a 30% cut of revenue out of paid apps and they decide which software goes on sale, and what doesn’t. But I think the main issue Steve Jobs had to face is the following: people like my friends or my dad don’t know how to find and install apps on their Mac. They don’t know where to look, and how to keep an app updated. The Apple Downloads page and Bodega have been nice and noteworthy attempts, but they’re not enough. A complete change was needed, Jobs probably felt. So by bringing the App Store infrastructure back to the Mac, not only they’re seeking to unify the OS X experience under a giant Apple approval system (they have already posted the developer guidelines) and interface standards, they also want to let people know that now installing apps on a computer is just as easy as on the iPhone.

For regular customers (I repeat: regular, not geeks) the Mac App Store will have terrific advantages: one-click purchases tied up to an existing Apple ID, automatic and controlled updates, unified store experience, clean description pages and, in general, the convenience of having everything “under control”. Just like on iOS, they’re envisioning a system where people fire up the Mac App Store, check on new released or featured software, start clicking on Buy. And again. And again.

For developers, it’s going to be nothing short of a life-changing transition. No more in-website store implementation. No more credit card fees. No more hosting problems. The downside to this - or indeed, the BIG change - is that every app will have to pass Apple’s approval, and developers will have to give away a 30 percent of their revenue on every app purchase. 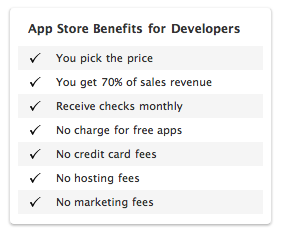 For developers, though, there’s more than just a simple list of pros and cons. What about paid upgrades? What about trials and demos - something that’s “normal” on the desktop? What about volume licensing?

I don’t know what Apple’s intentions are. Will they radically change everything and say “Hey, this is how you’re gonna do it from now on” and roughly port the iOS experience on the desktop? Will they update the iOS App Store to include support for trials, upgrades and licensing?  Will they just make a few exceptions for the Mac App Store? Will they perhaps create a new demo API for Lion and iOS 5? How are they going to deal with video introductions, something that’s huge on Mac app websites?

Even more questions: how is this going to affect piracy? Does the Mac App Store mean we’ll see $0.99 Mac apps and iAds on the desktop?

A few noteworthy “rules” from the guidelines many developers tweeted today:

Apps that crash will be rejected

Apps that exhibit bugs will be rejected

Apps that use non-public APIs will be rejected

Apps that are “beta”, “demo”, “trial”, or “test” versions will be rejected

Apps that duplicate apps already in the App Store may be rejected, particularly if there are many of them

Apps may not use update mechanisms outside of the App Store

Apps that use deprecated or optionally installed technologies (e.g., Java, Rosetta) will be rejected

Apps that look similar to Apple Products or apps bundled on the Mac, including the Finder, iChat, iTunes, and Dashboard, will be rejected

I guess that what we really don’t know yet is whether Steve Jobs sees the Mac App Store as an alternative version of the App Store for OS X, or as the unification of App Store on all Apple devices. The latter option would be way difficult for developers to accept. But my gut says (and if you re-listen to what Steve Jobs said earlier today, you’ll get this feeling too) Apple wants the Mac App Store to be an App Store for Mac - a revised version of the iOS experience that keeps the nature of OS X in mind. This would be better for developers, and would make the transition easier.

But then again, you never know how much deep Apple wants to cut.