Last month, we looked at the Power Mac G4 line, a series of computers that defined the professional workstation for OS X users for many years. 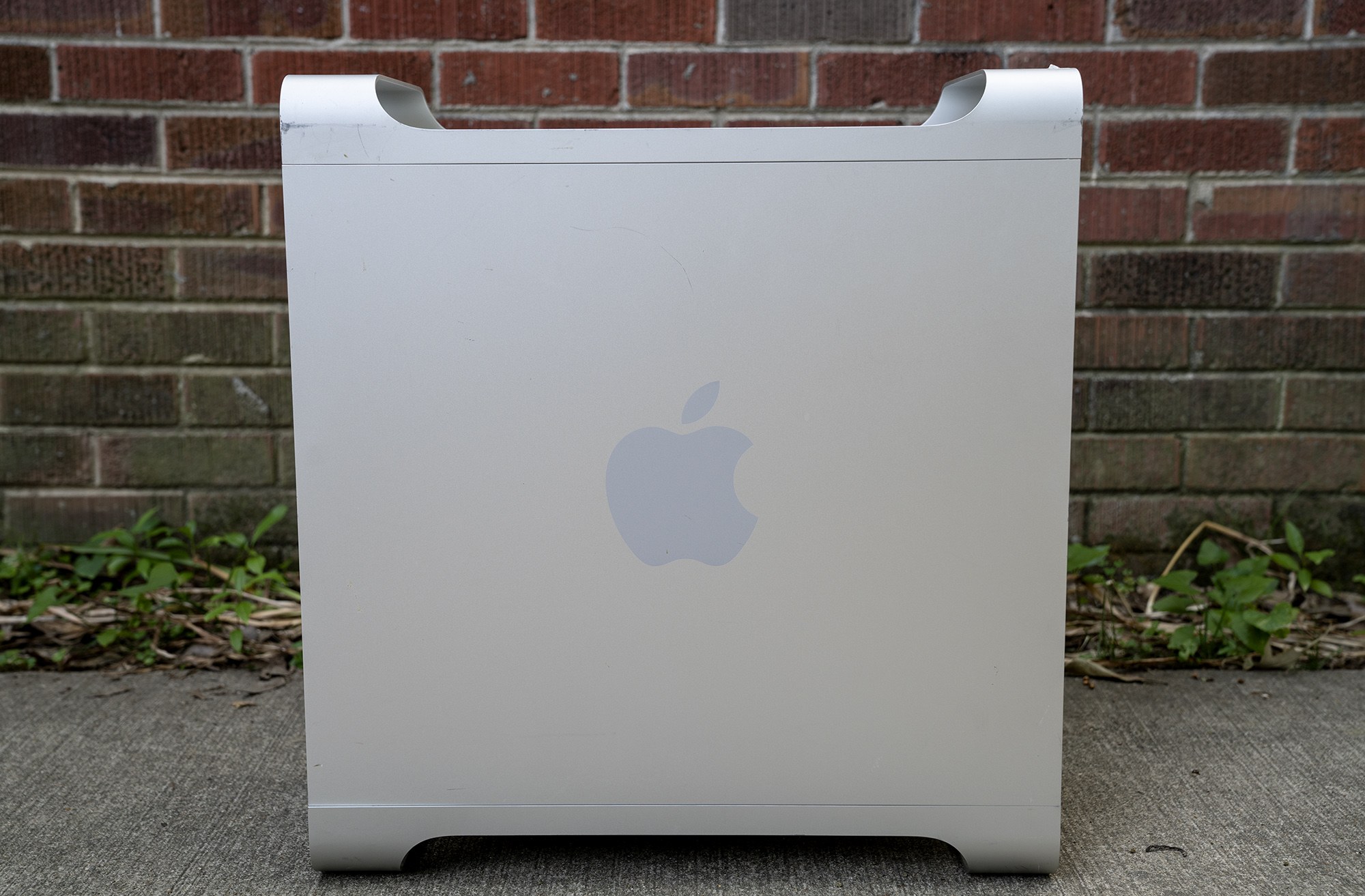 In every way, the Power Mac G5 was more than the G4 it replaced. It was bigger, more expandable and faster.

As his “One More Thing” at WWDC 2003, Jobs spoke about the chip, the system, then the product, building a story of power and capability unrivaled in the PC world.

At the heart of this new Mac was the PowerPC G5 processor. Created in partnership with IBM, it was the first 64-bit processor to be put in a personal computer. Clocked up at 2 GHz, it was the fastest 64-bit processor ever shipped, and with a 1 GHz front-side bus and support for up to 8 GB of memory out of the box, it blew away the system built around the G4.

The G5 processor was designed was to be put into multi-processor machines, which Apple sold at the upper end of its product range.

In practice, these numbers meant that the Power Mac G5 ran circles around the G4, but Apple took the opportunity to improve more than just CPU performance. The original G5 used 400 MHz RAM, which sported twice the bandwidth of the memory in the outgoing G4.

On the board, Apple supported PCI-X for its slots, and used SATA for connecting spinning hard drives and the SuperDrive. This gave users faster access to their files and media, making all of OS X feel smoother.

The new case would be dubbed the “Cheese Grater” due to the large number of holes in the front and back. With the capacity for dual processors, 8 GB of RAM and multiple PCI cards, the system could generate massive amounts of heat. Those openings were key to keeping air moving through the case.

The cooling system was far more complex than a bunch of little holes, though. The Power Mac G5 was home to nine fans.

“You might think, ‘Oh my God! Nine fans means its going to be nine times louder!’

No! It turns out, the opposite is true. By putting the fans right precisely where they’re needed and independently controlling them all, we can make it a lot quieter.

The enclosure was divided into four separate thermal zones, and those fans did their job. The G5 was twice as quiet as the “Wind Tunnel” Mirror Drive Doors G4 it replaced.

The G5 split its I/O between the front and back panel, with a USB and FireWire port joining a headphone jack on the front of the tower and everything else out the back. 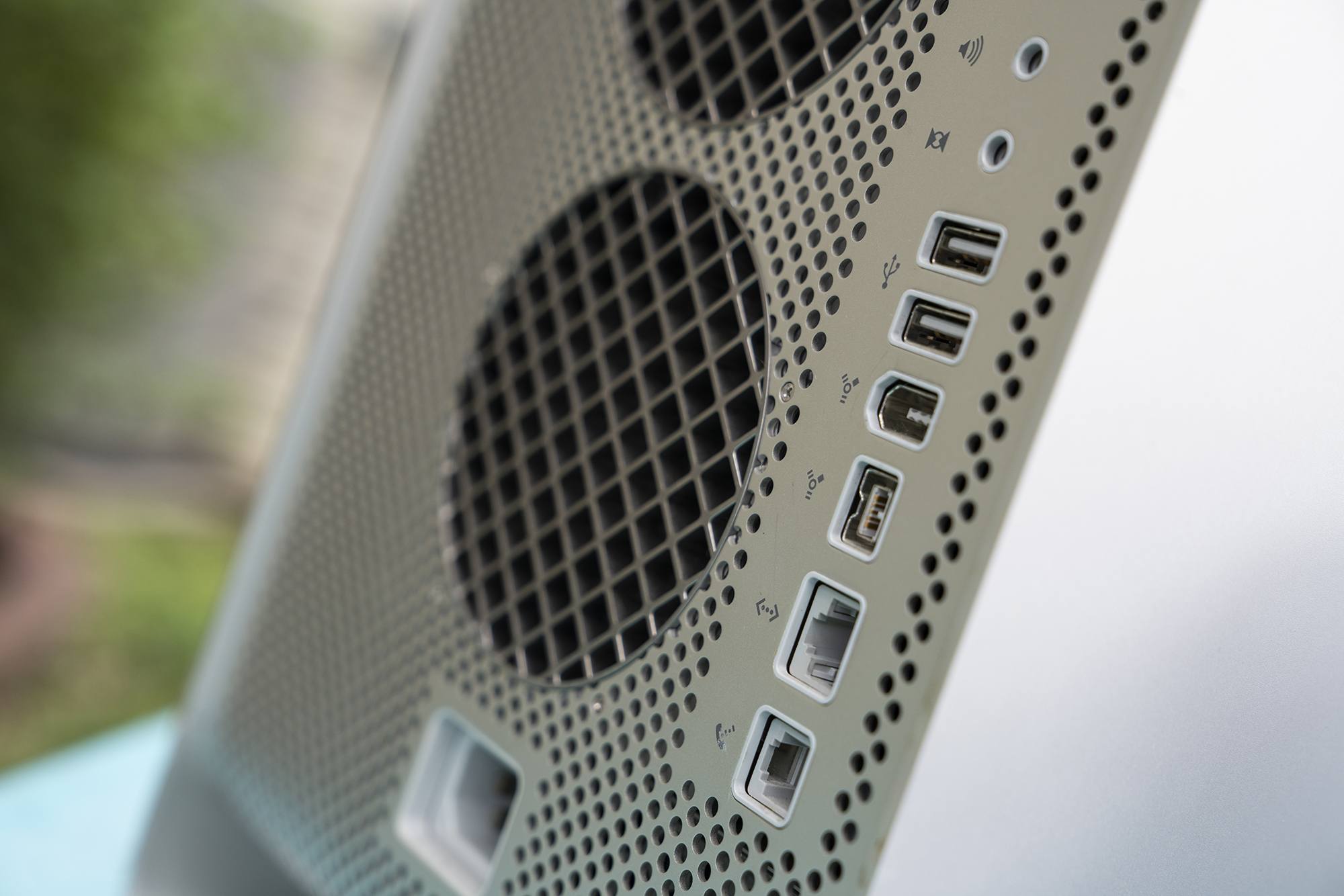 The case was made entirely out of aluminum, immediately making the G4s look small and outdated. Apple retained the handles at the top and bottom of the case, but they were noticeably less comfortable to use than the curved plastic ones on the G4. 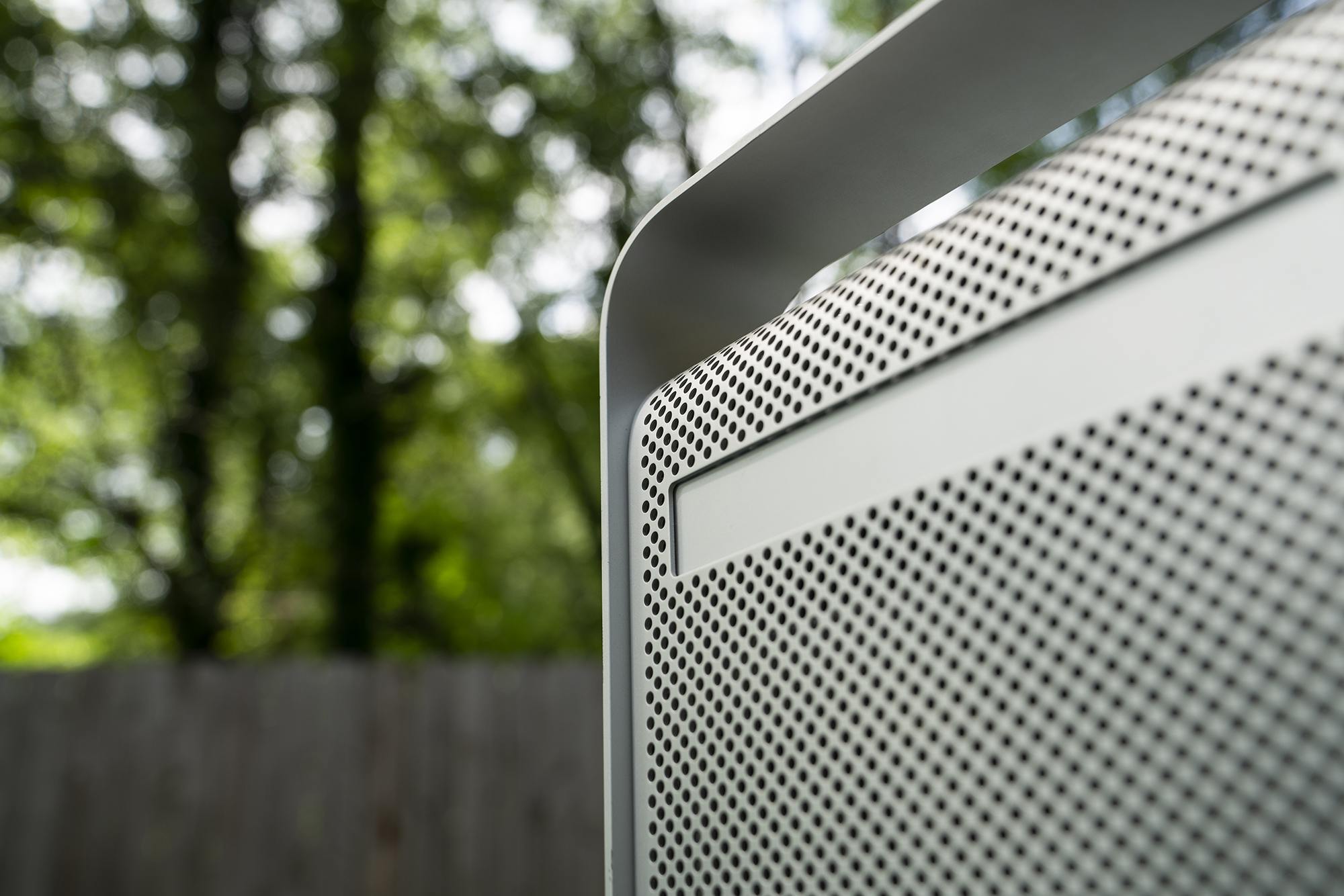 Like the Power Macs from the previous several years, the side of the G5 opened to reveal its internal components. The side didn’t swing down like before, but simply lifted off the case when unlocked. It was paired with a clear plastic air router that also lifted out of place with minimal effort, granting a user access to their machine’s internals.

Evolution of a Workhorse

Over the next two years, Apple kept the Power Mac G5 updated on a regular basis.

As clever as Apple’s computer-controlled fan system was, it was no match for this machine, and Apple rolled out its first liquid-cooled Mac.

Even now, 14 years later, this still blows my mind. Apple did all it could to hide the intricacies of the radiator and hose system behind nicely-designed metal panels: 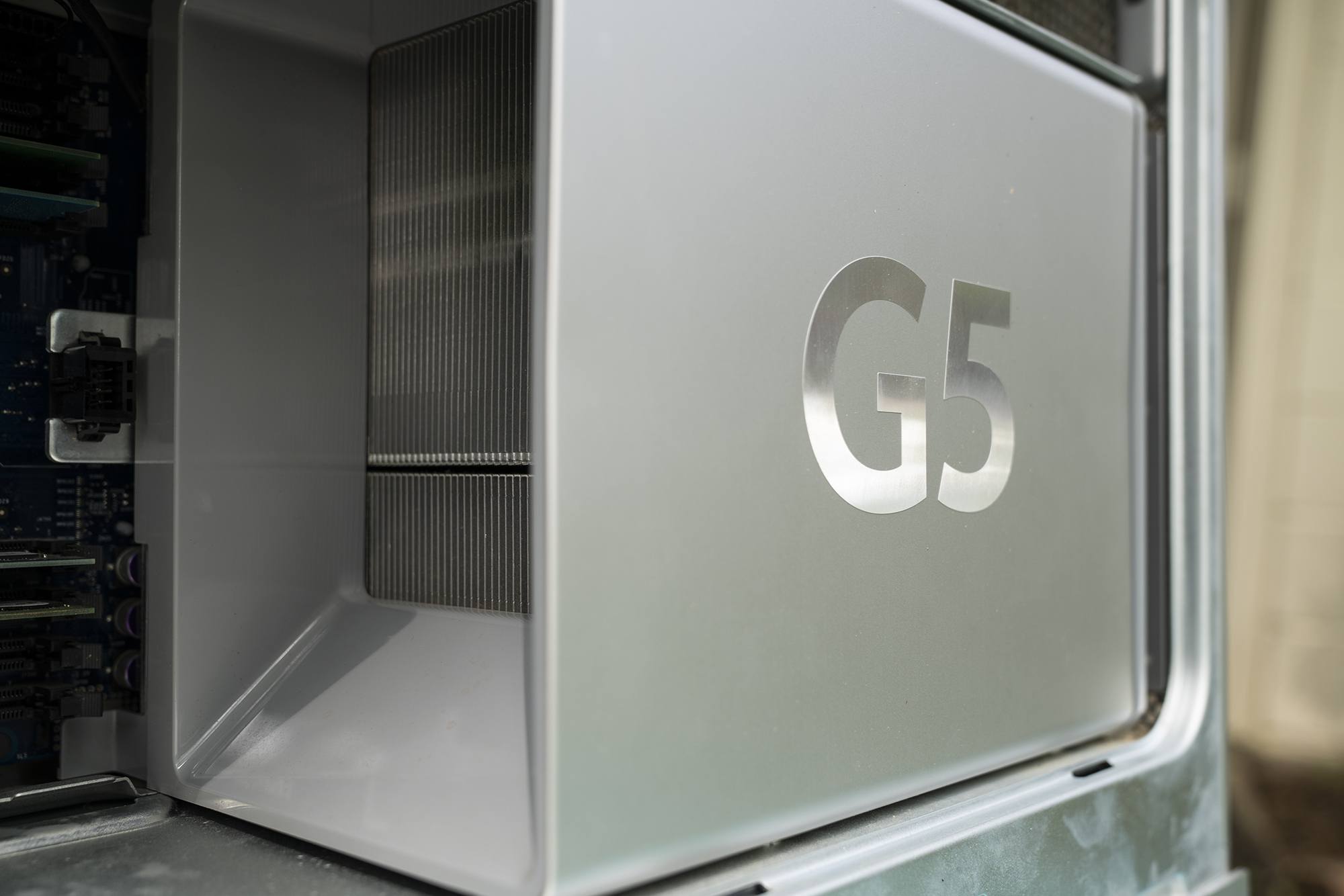 Note that not all G5s were liquid cooled after it was introduced. Apple only used this technology when it was needed, and only three SKUs came with a radiator:

Unfortunately, the first two liquid-cooled models were prone to leaks, which could lead to power supply, CPU and motherboard damage. Apple never issued a specific repair bulletin about these issues, but by the time I was a Mac Genius in 2007 or so, leaky G5s were taken very seriously. Bringing them into the repair system included a lengthy safety interview with the owner, and repairs were more or less always just “taken care of,” regardless of warranty status.

That antifreeze-colored hiccup aside, the PowerMac G5 saw modest improvements during its lifetime, but the last one is worth mentioning.

Announced in October 2005, the last generation of Power Mac G5s included PCI Express and, at the top end, a “quad-core” configuration, made up of two dual-core G5 CPUs. This was a beast of a machine, and was noticeably faster at multi-threaded tasks than its siblings. 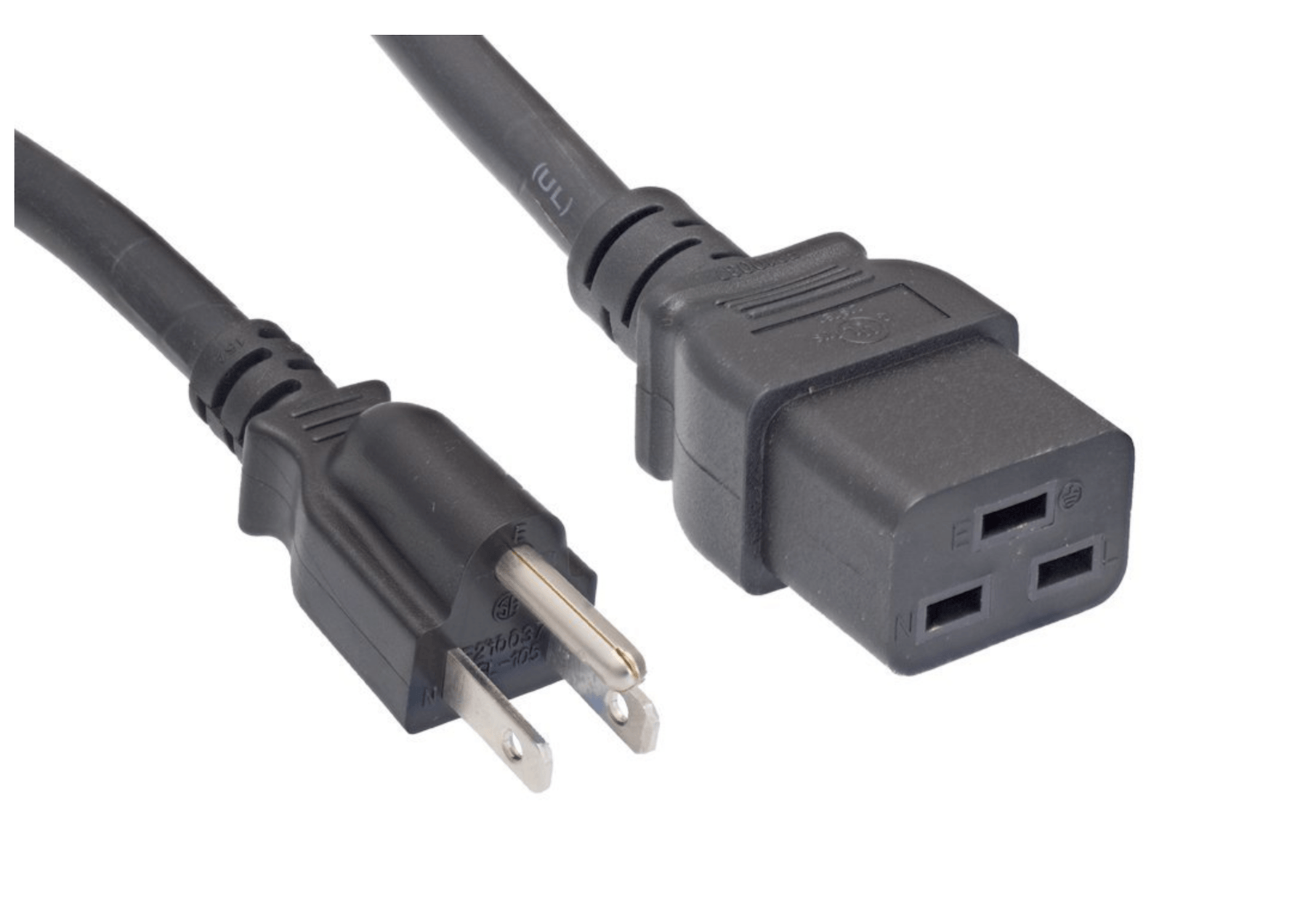 It’s easy to spot a “G5 Quad” by looking at the power cable it used. These machines sported massive power supplies and the oddball IEC320 C19 power connector instead of the standard one still found on things like the iMac today.

The Last of Its Kind

The PowerPC G5 chip was, in hindsight, doomed to failure.

Signs of trouble started in 2004, when Apple was unable to keep a promise made at the G5’s original introduction: that within 12 months, there would be a 3 GHz Power Mac G5 for sale.

On stage at WWDC 2004, Jobs addressed the broken promise, saying that moving to anything smaller than 90 nanometer fabs had proved difficult for IBM. However, he was quick to point out that their partner had faired better in this regard than Intel.

As time went on, another problem became apparent: the lack of a PowerBook G5.

At the heart of the problem was the power required by the G5 chip and the heat it generated. This was widely poked fun of by Apple fans. Forum posts were often accompanied by this image: 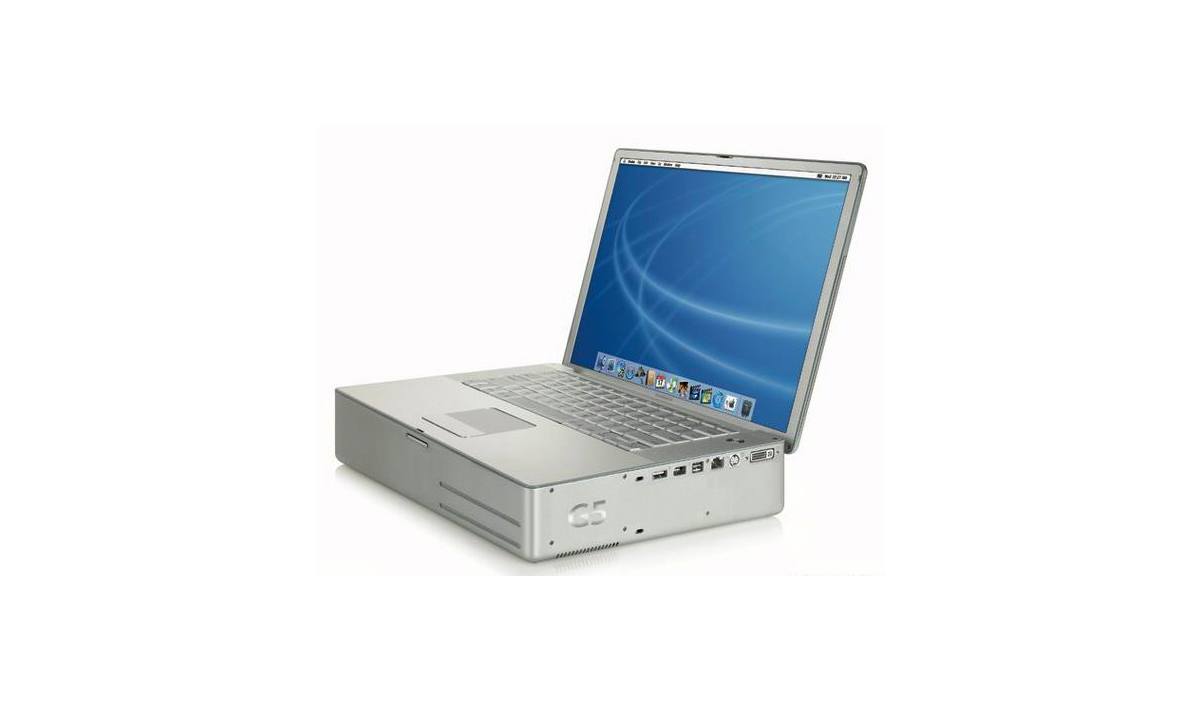 This problem was heavily stressed when Apple introduced the switch to Intel processors, and again when the first MacBook Pro was announced. Simply put, there was no way that the G5 could be squeezed into such a small portable device. 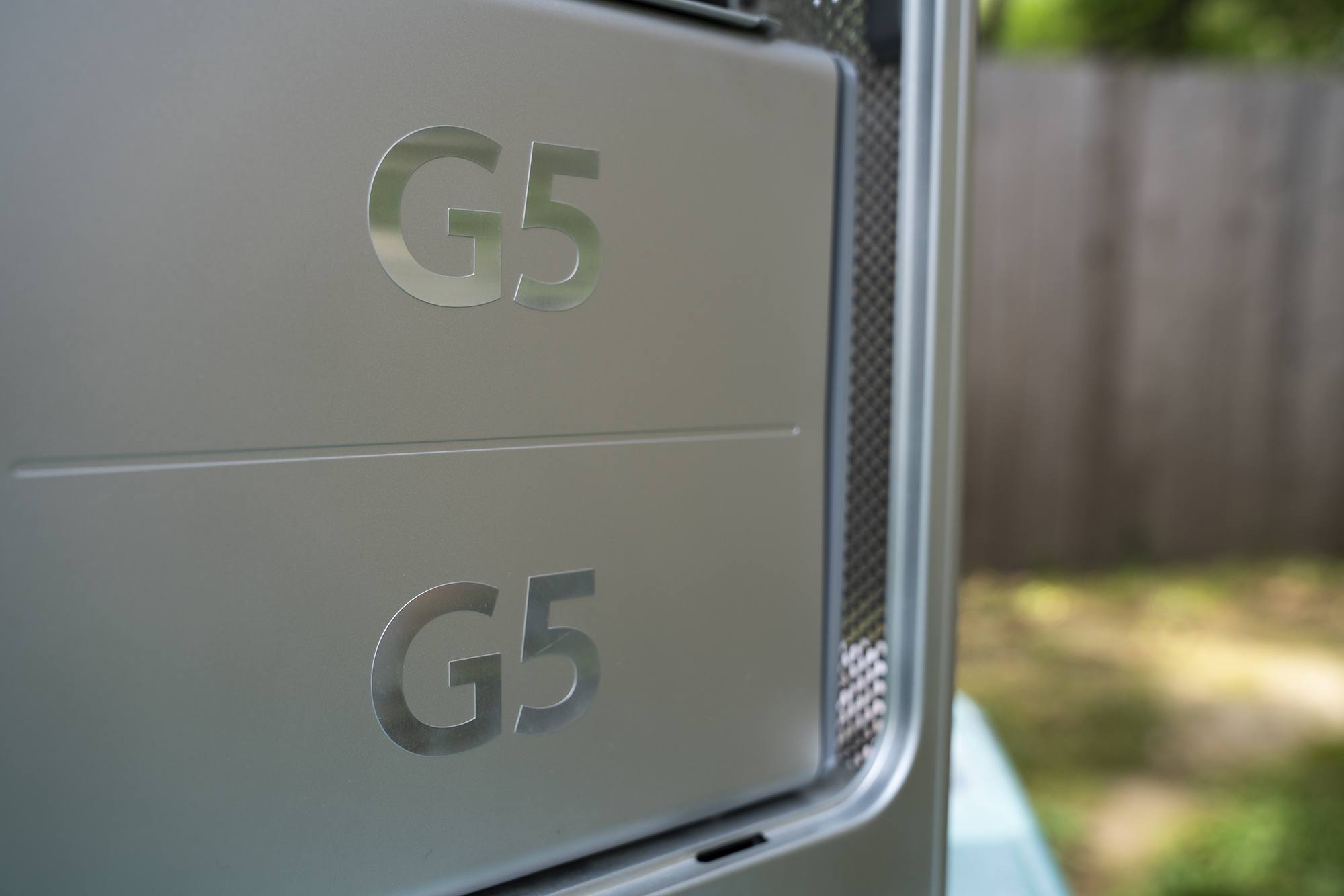 That leaves the Power Mac G5 in a weird place, historically. It was the fastest PowerPC Mac ever built, but in a way, that’s like being the most deadly dinosaur to roam the Earth. Being on top only matters until the landscape changes out from underneath you.