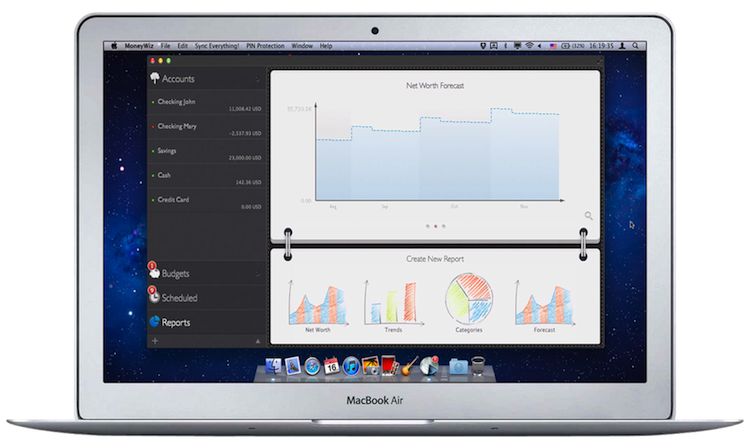 I reviewed MoneyWiz for iPad back in late February and found it to be a really great personal finance app for the iPad. Today I’m back to have a look at the recently launched Mac version of MoneyWiz. In many ways, the Mac app is identical to the iPad app, so this won’t be an in-depth review of the Mac app — rather it’ll be an overview of the MoneyWiz app and then some discussion on specifically the Mac App as well as the ‘Reports’ and the Sync service.

An Introduction to MoneyWiz

For those of you who are new to MoneyWiz, let me quickly give you the rundown of what the app does in general (this is pretty much applicable to all three versions of MoneyWiz). It’s an app that lets you take care of your personal finance situation and has features to not only track expenses and incomes for all your accounts, but also set and track budgets, set up scheduled payments and then review everything in various reports. I went into great detail with my MoneyWiz for iPad review and for the most part, what I said there is still relevant and with the Mac version too.

It certainly isn’t a very advanced finance or budget app, but for most people it should have everything they need — and that is exactly where I fall. But keep that in mind if you are coming from Quicken or a similarly advanced finance app, because if you were using some of Quicken’s more advanced features, MoneyWiz will be a little more restrictive to you. If you think about splitting the personal finance apps into “casual/simple” and “professional/powerful”, you’ll find MoneyWiz somewhere in between at the moment, but it is (by the intention of the developers) heading toward the powerful landscape, but with a design that is forgiving to those who are looking for something simple. 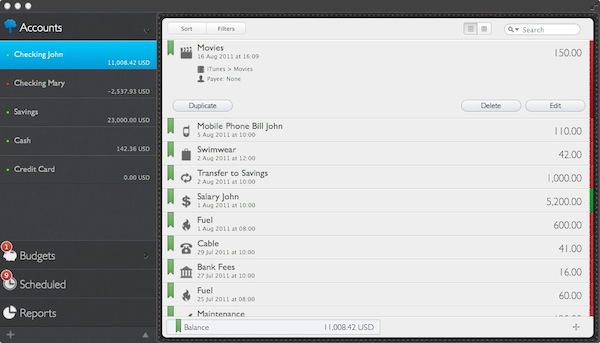 As I mentioned at the top of the article, MoneyWiz for Mac is strikingly similar to the iPad version - so much so that if I took a screenshot of the Mac app and displayed it on an iPad, you might actually believe it is an iPad app. The reason for all this is that the MoneyWiz developers decided to use the same UI for the Mac version as they had for the iPad. Speaking to them over email, I asked them about this and they explained that they actually had 4 designers working on 6 different designs. In the end they choose to go with the UI from the iPad — not only was it familiar to MoneyWiz users, but it had the right mix of a simple design and the flexibility of their more powerful features.

I must admit I am in two minds about this decision. Initially when I first opened a pre-release version of the app and saw the iPad design, I was a little disappointed, whilst I had liked the iPad design I was hoping for something more creative and Mac “appropriate”. To some degree I still feel that, but thinking about it rationally, I’m moving toward appreciating the decision. Perhaps the biggest reason is familiarity, everything is where I expect it because I’ve used the iPad app for months now. Not only does it look good, but the design is logical and simple to understand. From when I tried out some of the other Mac finance apps in January, they were all exceedingly boring and ugly to look at, but they were also confusing in many cases. That isn’t the case with MoneyWiz and that’s a big thing for new users to the app.

Some Negatives (that can be fixed)

But let me focus on the negatives for now, because whilst I am a fan of MoneyWiz and use the trio of apps myself, the Mac version does have some weaknesses. Firstly with the minor; despite using the iPad UI, there are some aspects of the app that are just standard for OS X, the most obvious was the drop-down for adding a new expense/income/etc. and it totally conflicts with the rest of the very custom-looking design. Compare it to the auto-fill box and you’ll see what I mean. The developers note that this decision was due to a difficult technical problem due to a few factors including maintaing compatibility with Snow Leopard - but they say they will look into fixing it in the future. Another minor issue (that is currently being fixed for an upcoming update) is that many of the icons are blurry in the app.

However the more serious issue I have with the app is the lag that I encounter when scrolling. It isn’t a deal breaker but it is disappointing. On this issue the developers note that it is due to a custom table implementation that was again due to Snow Leopard compatibility but that it is definitely something they are looking to fix in an upcoming update. On the whole, these are all fairly minor (and fixable) issues, it’s just disappointing that they couldn’t be fixed before release because they make the app feel rough around the edges. 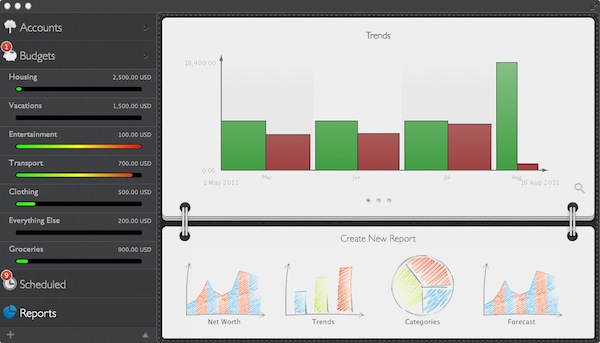 After about five months using MoneyWiz, I can safely say that whilst I like the app a lot, the one weakness is the Reports section. Whilst they do work in effectively showing various data points (such as Net Worth, comparisons between your spending on different budgets, etc.), they aren’t particularly nice to look at. This is of course because they are rendered by the developer’s code and not by a designer in Photoshop, but I still think they could use some work as some of their competitors do a good job in this aspect. Another frustration I have is the fact that you can’t choose which reports to automatically load at the top of the Reports screen - the developer has chosen three but I’d like to change which ones are used (and preferably add some). My last concern is with the forecast report - in my experience it has been giving forecasts that are quite off the mark, the developer has noted that an upcoming update should improve its accuracy, so I’m hopeful that will be the case. 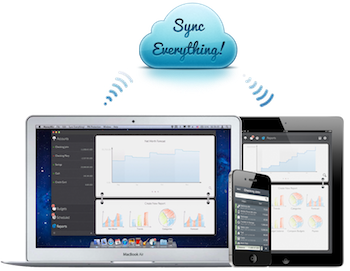 In my review of MoneyWiz for iPad, I briefly touched upon the sync service that is offered. This time around I need to go in to more detail about it, because frankly, it works perfectly. The developers implemented the sync service so that it would be painless to use the iPhone app, iPad app, and Mac app together without issue and so that you could have all your data no matter which device you had with you. Typically sync is something that is prone to be buggy, unreliable and inconsistent — particularly when it’s a custom developed sync service. So I have been ecstatic to see that sync has been 100% reliable for the five or so months that I’ve been using MoneyWiz. It’s also automatic so don’t worry about having to manually press (and remember) a sync button. Testing to see how frequent the sync pushes updates to the app, I was impressed to see that the apps (all of them) would receive any new transactions/changes within 10-15 seconds of the change occurring. Perhaps the only issue is that some people may be uncomfortable with a third party have control over syncing their personal finance information - I trust the developers enough to allow it, but it is something to keep in mind. Obviously the downside if you aren’t willing to turn sync on is that you won’t really be able to use the different MoneyWiz apps and will have to choose one version to use.

Now that MoneyWiz is available on the Mac, many people may be willing to give the app a go and perhaps transition over. For new users who want something reasonably powerful but simple to use, I think MoneyWiz is a great choice and one that I personally use. Having the trio of apps (iPhone, iPad and Mac) and the excellent sync service makes MoneyWiz very flexible. Just imagine going to the shops, buying something on your card and as you leave you enter the expense onto your iPhone and it’s automatically synced over when you open the iPad and Mac app up at the end of the week to check on your budgets for the month.

MoneyWiz for Mac is available on the Mac App Store for $24.99.