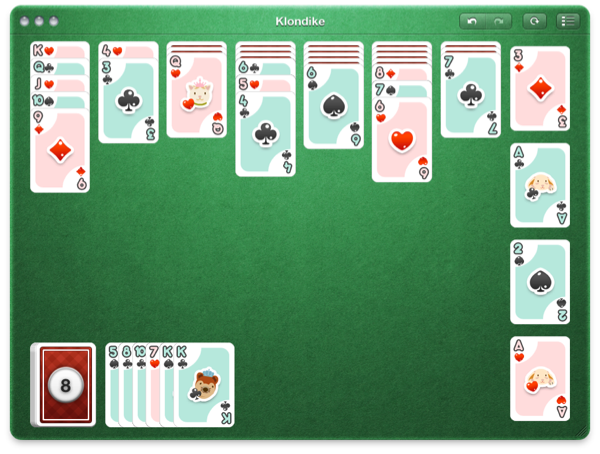 There isn’t too much you can say about solitaire on its own. It’s the card game your coworker plays instead of writing formulas for Excel spreadsheets on Windows, but that doesn’t mean we can’t turn solitaire into something more than a time waster. Proof of concept: Mondo Solitaire from Ambrosia Software is solitaire done right. You aren’t just playing the same game of Klondike over and over - instead you’re offered over 300 variants of solitaire madness to choose from. If you include the beautiful game board that looks like it should bundled with Apple’s own Game Center, then you have yourself one premium handful of card games. 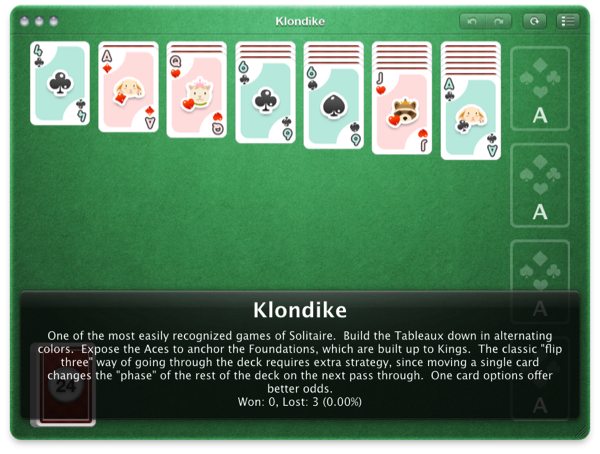 And what a handful it is! Ambrosia put a lot of attention to detail in Mondo Solitaire, from the gorgeous game interface to the card stylings and animation, you’d never think something as mundane as solitaire could be made fun when a little Mac magic is tossed in. As you play through Mondo, you can drag cards to their proper location or simply click on them to automatically have cards move to their appropriate spots. It isn’t quite cheating, but I do love how decks are unfurled. Traditionally, only three cards at a time are shown in solitaire games, but Mondo will reveal the current three cards and all previous cards unveiled from the deck, allowing you to keep better tabs on what’s in the deck. If you really want to cheat, you can show hidden cards from the menu, but you won’t do that right? The sounds are all realistic, although some can get slightly irritating as a woman hums, “no-no” when you can’t make a move. As the game doesn’t follow a traditional aqua interface there is some weirdness as the board flips and resizes when you select a different game of solitaire to play, but can you blame Ambrosia? 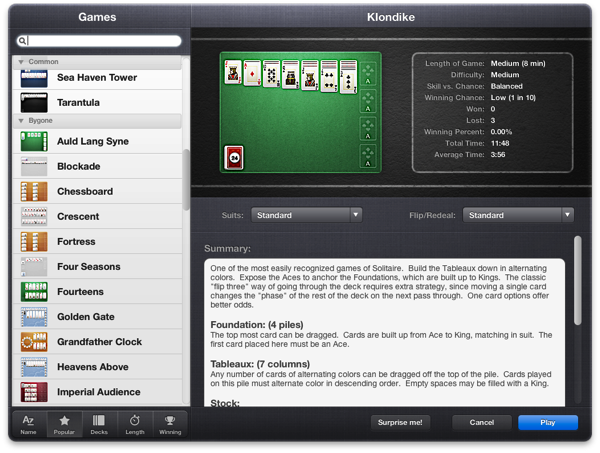 Not only are they telling you how to play each variation of solitaire the world’s greatest ship captains and nannies have created in their free time, but the give you all sorts of meta information from difficulty, to game length, and will even average your wins & losses. There are so many games to choose from, you can organize variations of solitaire by popularity, difficulty, the number of decks needed to play, and how long the game takes. You can also search for specific titles if there’s an ol’ game passed down from the Netherlands. 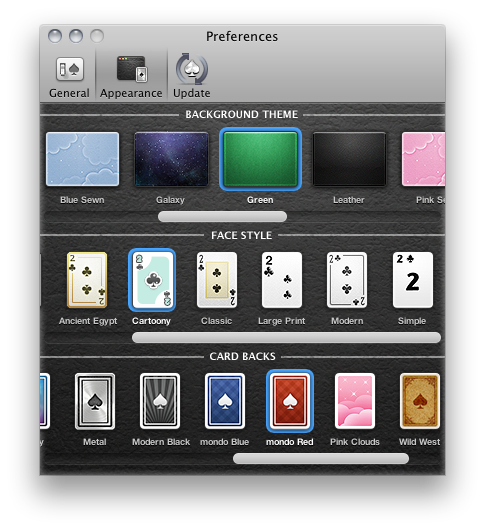 If you don’t like the default themes for the games you wind up playing (possibly for the yet unmentioned random option), you can head on over to the preferences and choose your own background, deck back & face style too choose from. You can further customize Mondo Solitaire to your heart’s content by disabling cheating, hiding guide lines, and setting animation speed in the general settings as well.

Mondo Solitaire offers a suite of solid solitaire titles that’s been hand crafted just for OS X. If you have an affliction for card games or just want to show off to your Windows counterparts, then you’d be well advised to pick a copy up for yourself for $9.99, or download a free trial to try it yourself.