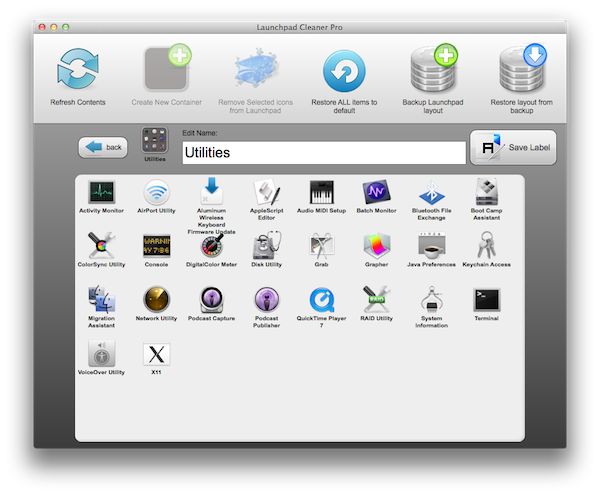 Launchpad is somewhat of a controversial feature addition in Lion, it is arguably the most blatant example of iOS’ influence on OS X (and some would say the worst example of iOS’ influence). A lot of the criticism stems from the fact it displays every application that is located on your Mac - you really don’t want to have an Adobe Creative Suite or Microsoft Office because Launchpad will display icons from every app contained in those software packages.

A good analogy of LaunchpadCleaner 2 would be that it works in a simple way to how iTunes can organise an iOS device’s homescreen but for Launchpad on your Mac. Some of the more advanced features of LaunchpadCleaner 2 include the ability to make a backup of your layout, transfer a Launchpad layout to other Macs and the ability to simply restore to the default Launchpad layout. The only real negatives of LaunchpadCleaner 2 that I experienced was that it was a little slow at times, which may be related to the fact that it is an Adobe Air application. The other downside is that you can’t drag the application icons to rearrange them in a specific order - although this isn’t too problematic because Launchpad itself can do this task easily.

LaunchpadCleaner 2 is available for $4.99 from Zoltan Borne, however he has kindly offered MacStories readers a promo code to get the app for free. The first 20 readers that will use the code “MACSTORIESNET” (without quotes) from the app’s Buy window will be upgraded to the Pro version for free. To do so, download the app, click on Buy, then click on “Do you have a Promotional Code?” and enter the promo code. Zoltan also offers a free version of LaunchpadCleaner 2, although there are a few limitations with this version.