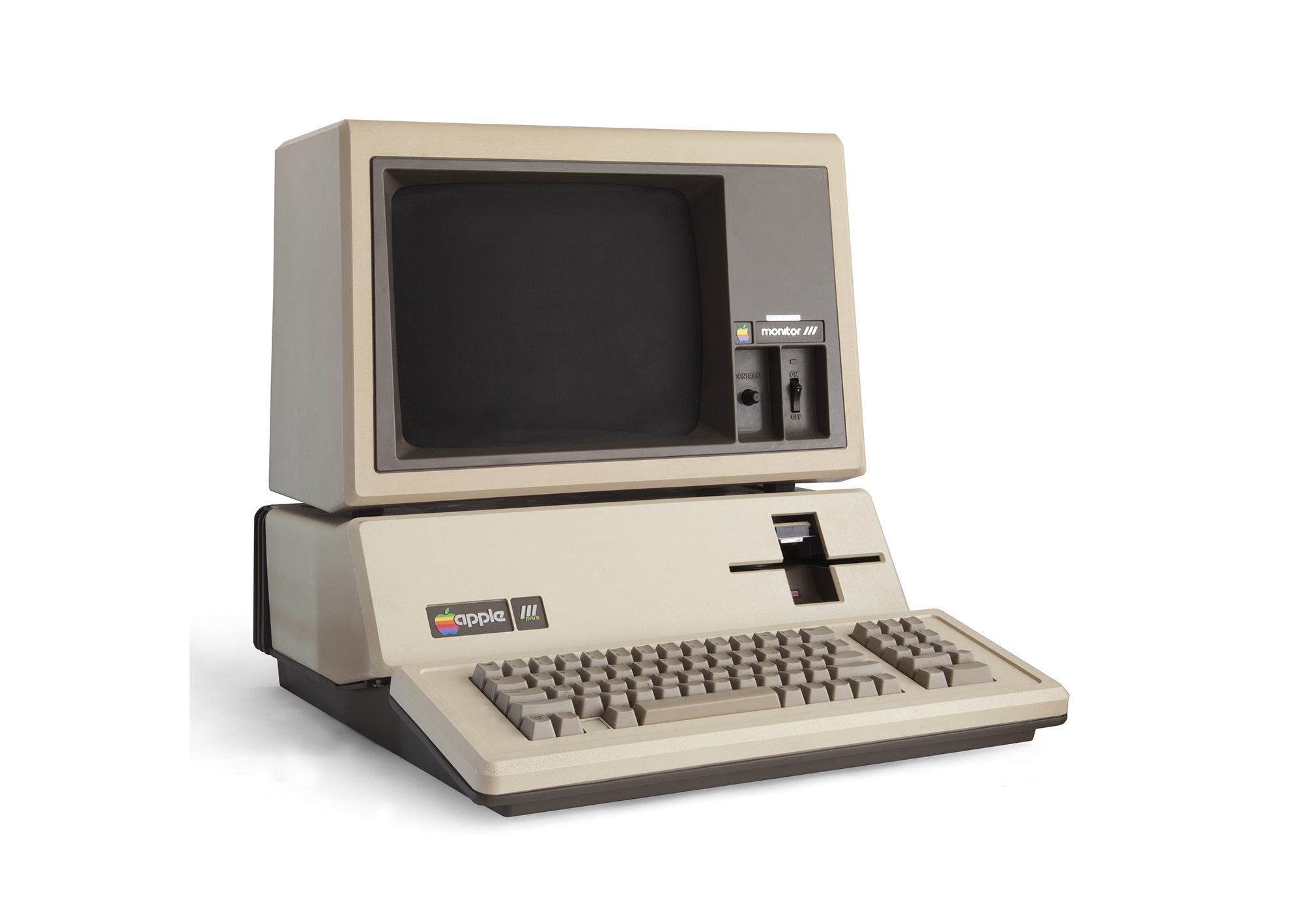 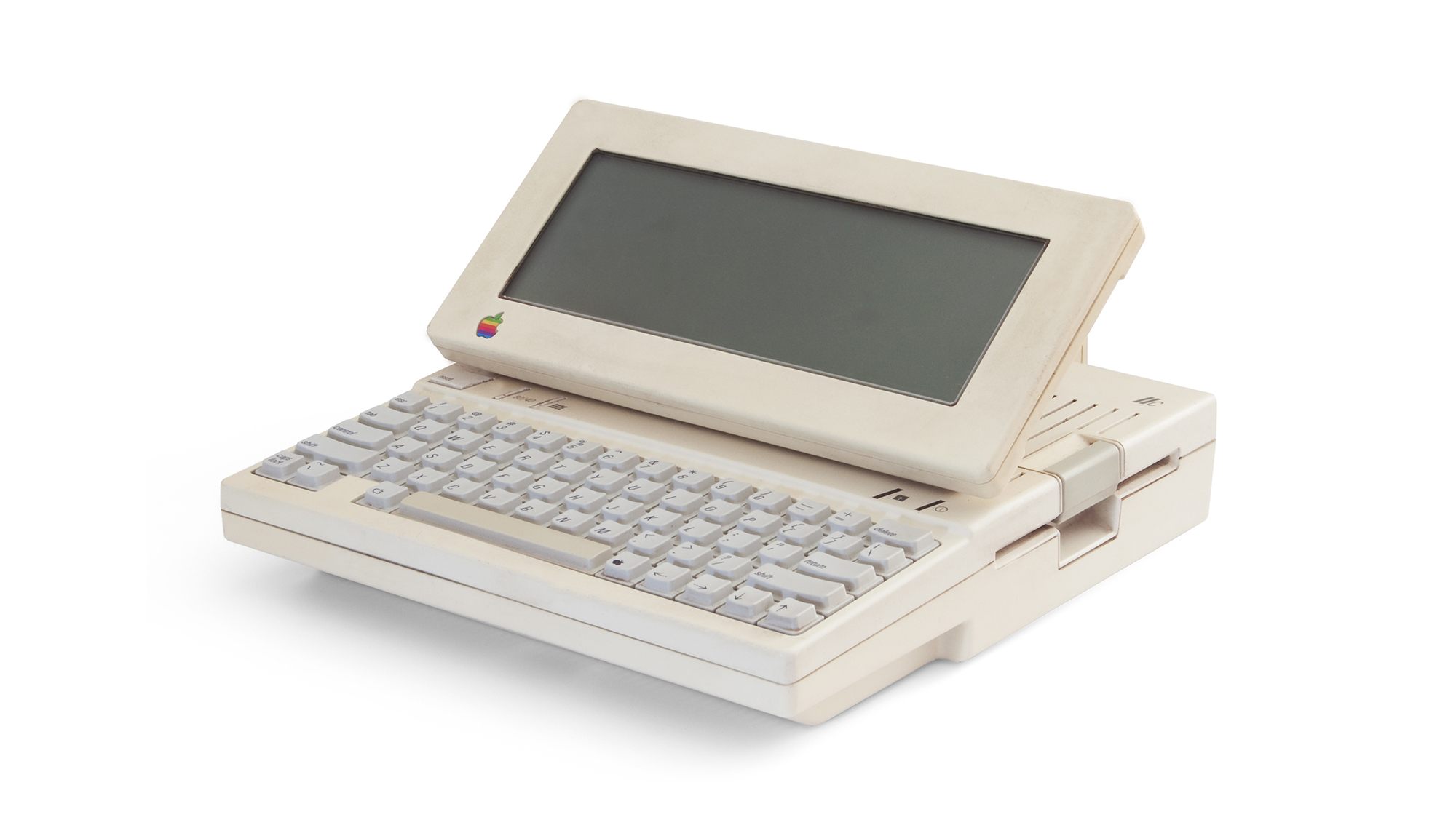 The display was designed to make the IIc even more portable, but as it lacked any way to stay attached to the computer, users found it annoying to travel with the $595 accessory. The lack of a backlight, poor resolution (560 x 192 pixels!) and low contrast made it difficult to use except in very bright settings.

In March 1989, alongside the Macintosh IIcx, Apple introduced a 15” vertical CRT with a resolution of 640 x 870 pixels. It was aimed squarely at the desktop publishers that had become the Mac’s bread and butter. The 80 DPI display was designed to show a full 8.5 x 11 inch page at once, making page layout easier and more efficient.

Apple wasn’t the first to market with such a product; Radius beat Apple to the punch. This ad shows their product beside a Macintosh for scale: 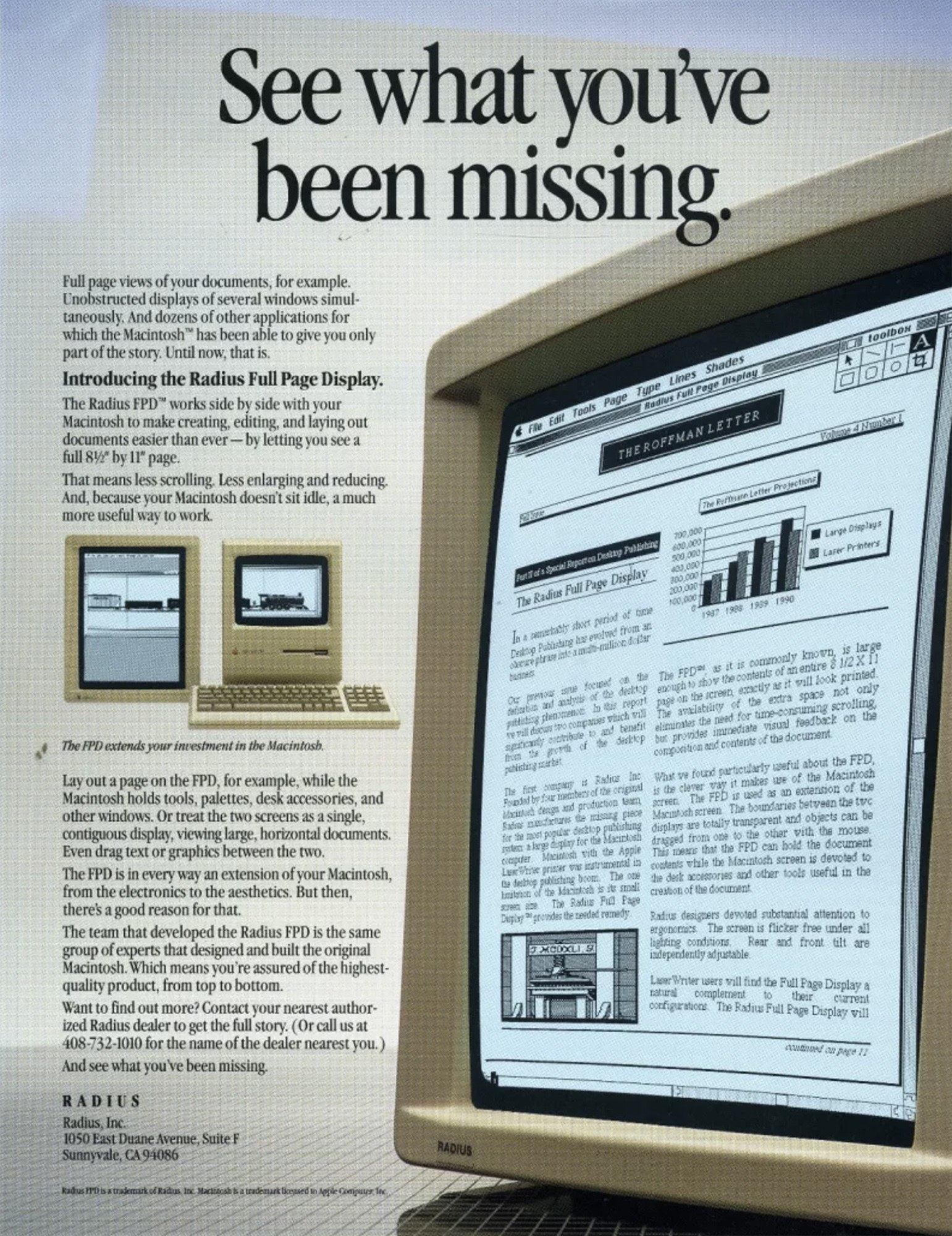 This is the tale of sorrow.

The Apple AudioVision 14 Display was a 14-inch display with an internal microphone, built-in speakers and more. It had a built-in micro-controller to communicate with the Mac over ADB.

Instead of a using separate ADB and video connectors, Apple opted for a single, proprietary connector named HDI-45. The 45-pin connector was only supported by a handful of computers, mainly the first-generation Power Macintoshes. An adaptor could be purchased to use a standard display with these Macs, but adapting to HDI-45 was impossible, stranding the AudioVision 14 Display on an island, forever doomed to be alone.

Now let’s fast-forward past a whole bunch of consumer-grade “Multiple Scan” and professional “AppleVision/ColorSync” CRTs and join the future, as 1998 saw it. 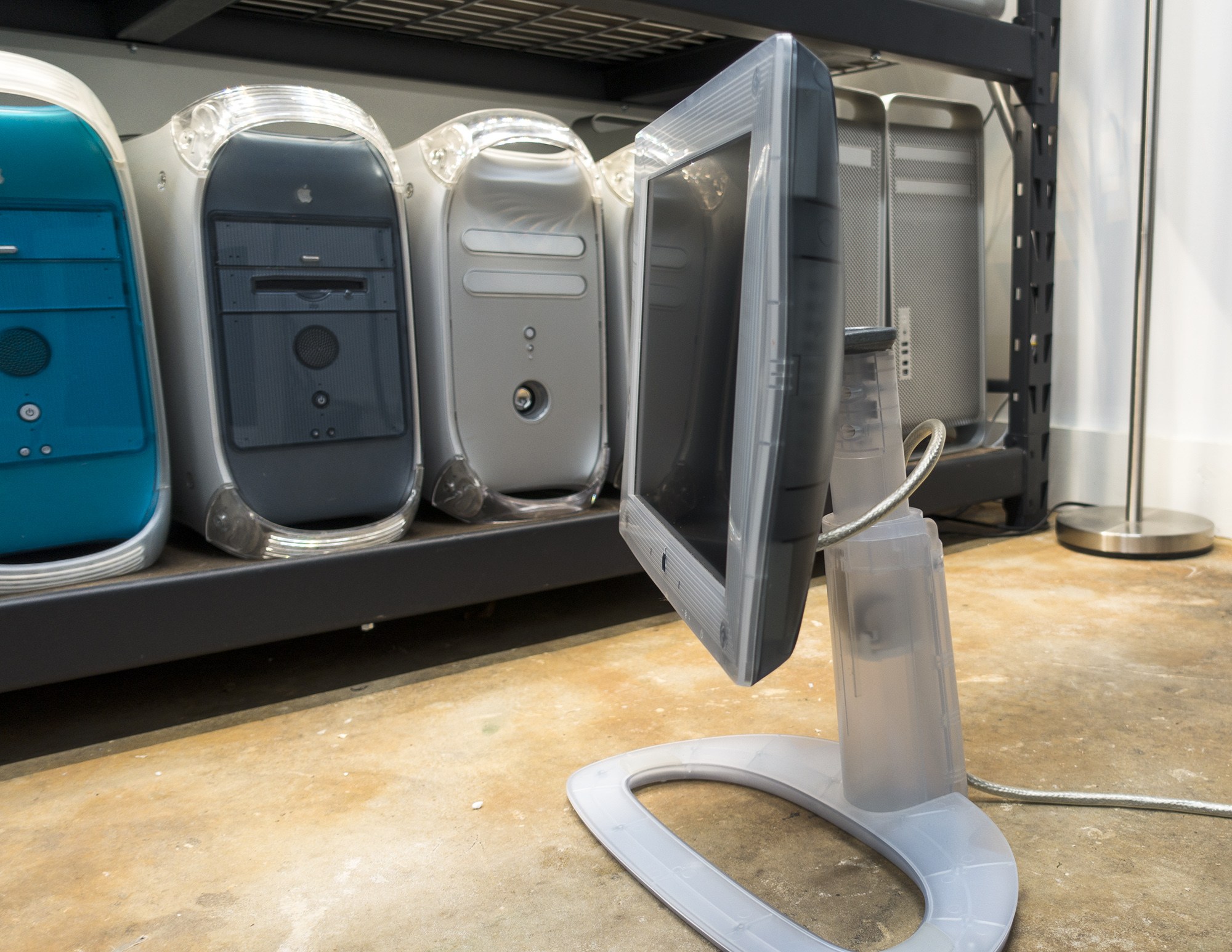 The $1,999 Apple Studio Display 15 sat at the top of the range of several CRT options. Apple shipped three generations, and each one used a different display connector (DB-15, VGA and lastly DVI) and data connector, spanning from ADB to USB. At launch, it was paired with beige Macs, despite looking like it was designed for the more colorful Power Macs that would start shipping in January 1999.2

Based on looks alone, this may be my all-time favorite Apple display. I remember my high school yearbook staff having one, making all us newspaper kids jealous.

With that off my chest, just take a moment to look at this thing: 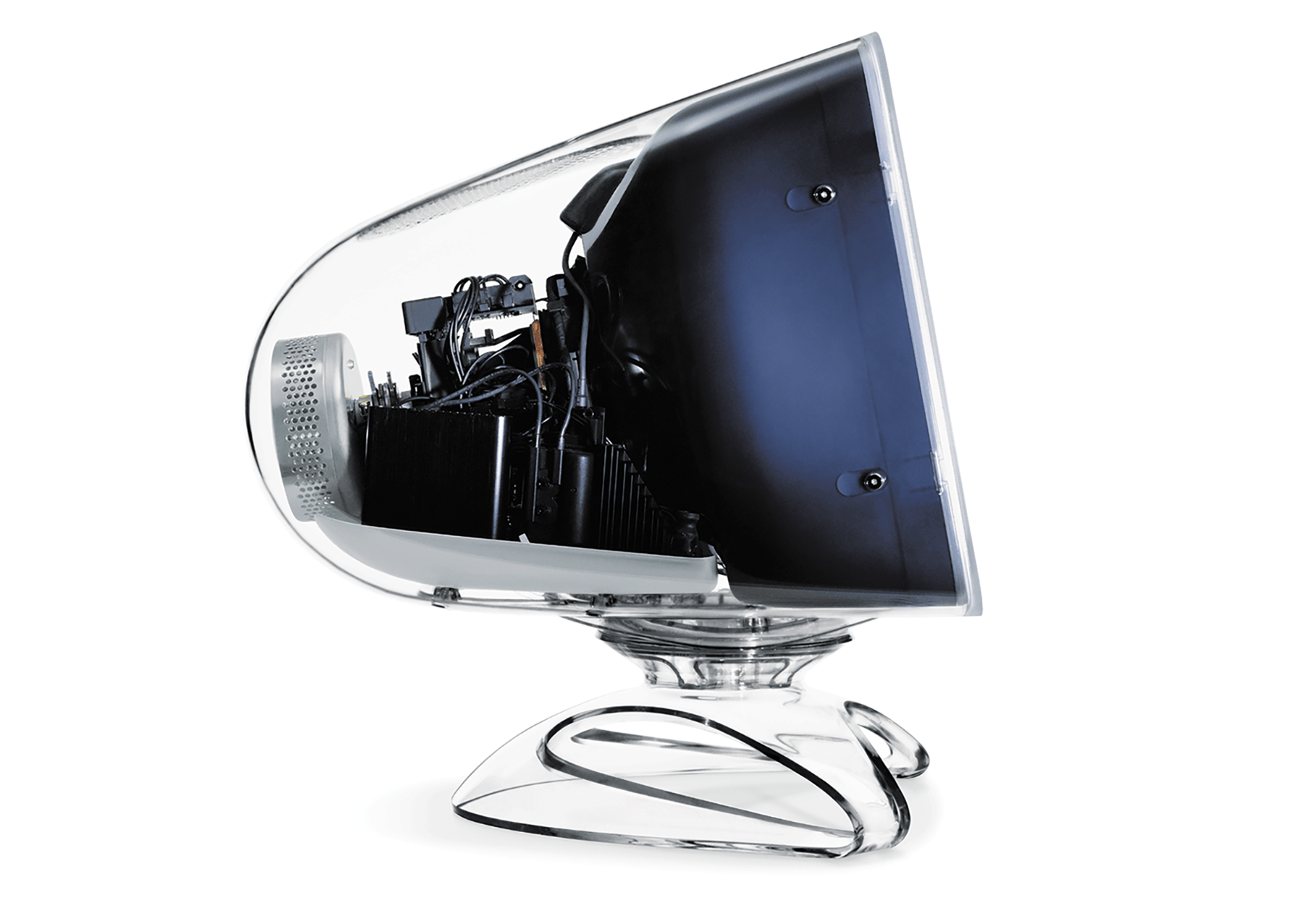 The clear case exposed the CRT far better than the translucent iMac G3s ever could. The contrast with the black material around the front of the CRT really made these things pop.

Under the covers, this was a new 17-inch CRT with a flat front, and it now used Apple Display Connector (ADC), Apple’s proprietary connector that carried video data (via DVI), USB and power all in one cable.

(ADC would stick around for several years, and enjoy a much more successful career than HDI-45, thankfully.)

In May 2001, Apple discontinued its last standalone CRT display. This generation of Studio Display was on sale for under a year.3

The Apple Studio Display 15-inch would mark Apple’s entrance into the external LCD market, but the first few rounds of products would be confusingly named. For 1999 and 2000, Apple sold 17 and 21-inch CRTs with the all-new Apple Cinema Display at the top of the line with a whopping $3,999 price tag.

These displays would come to define the design language Apple would use for many years. Unlike that Studio Display above, these panels were encased in a minimal, transparent enclosure that made it look like the LCD was floating above the desk: 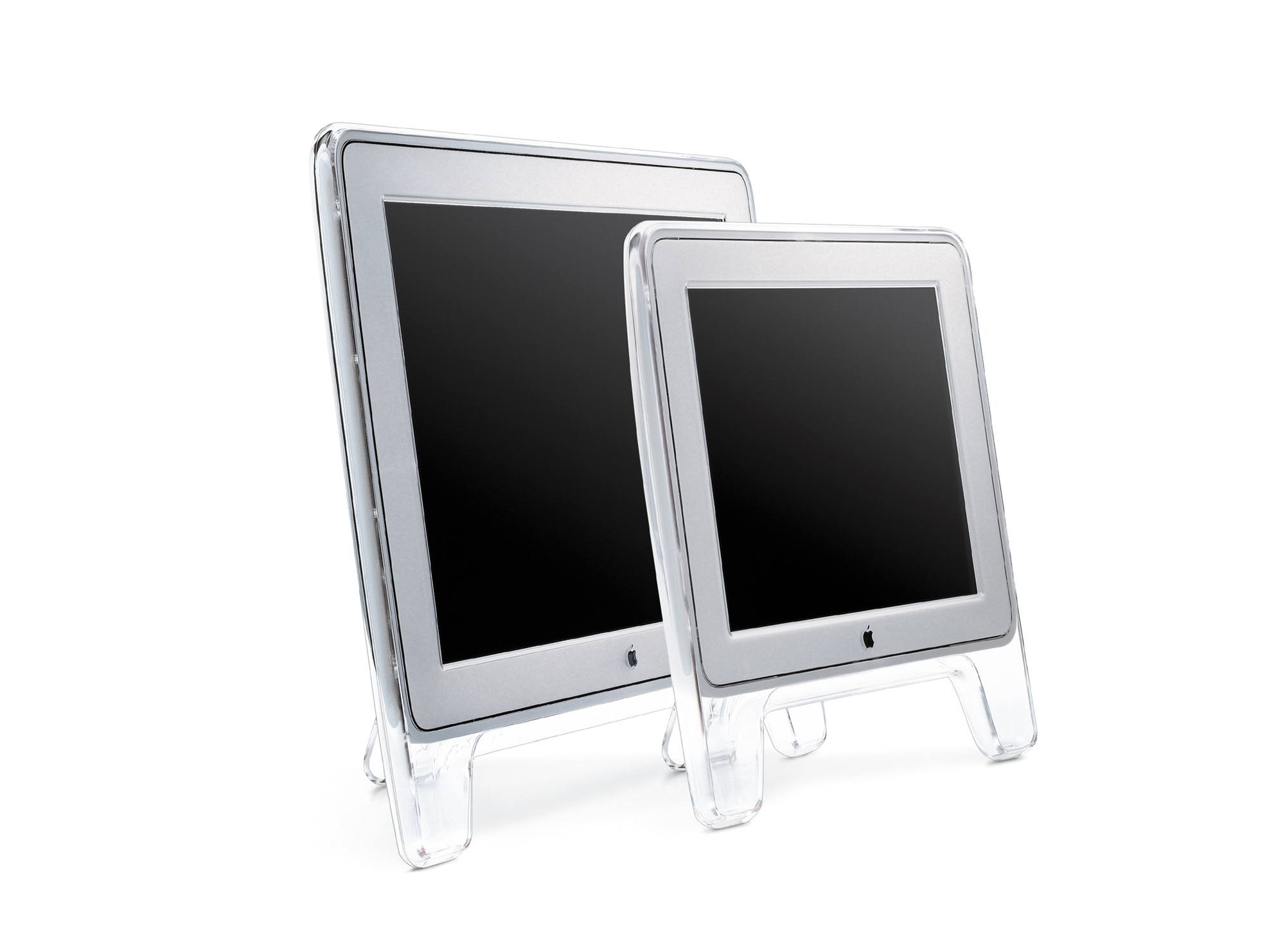 Apple shipped several sizes of these displays. The 1920 x 1200, 23-inch model was named the Apple Cinema HD display when it was released in March 2002.

In 2004, Apple revamped this lineup, introducing three new displays, at 20, 23 and 30-inch sizes clad in aluminum to better match the PowerMac G5:

The displays left ADC behind for good, moving to DVI, with USB and FireWire pass-through ports on the back of the display. 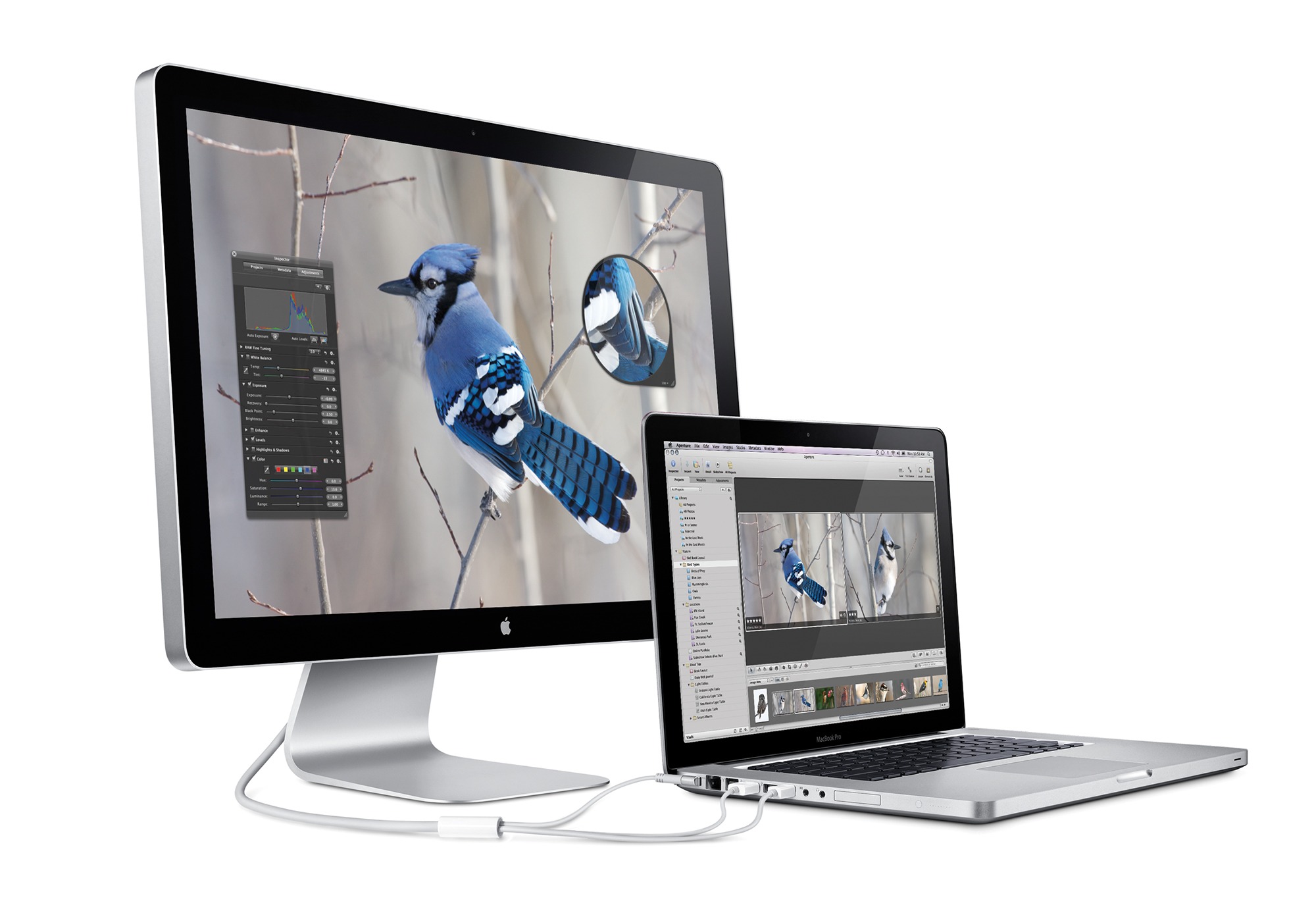 In October 2008, Apple introduced the 24-inch LED Cinema Display. Powered by Mini DisplayPort and USB, it packed a built-in iSight camera, microphone and speakers in its new iMac-like case.

It was replaced with the larger 27-inch LED Cinema Display in 2010, which gave way to the Thunderbolt Display a year later. Until its cancellation in 2016, the design was basically unchanged from this 24-inch model.

MacBooks and MacBook Pros far out-sell the Mac mini and Mac Pro, but it would be nice if Apple would have a good option for those customers when it comes to a display. Sadly, it seems those days are behind us.