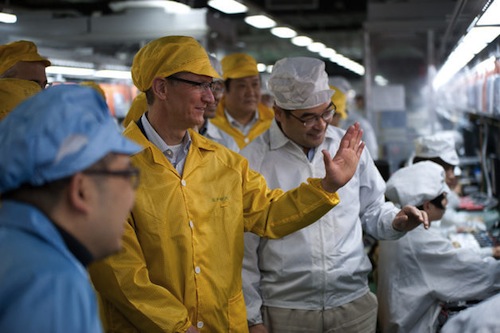 Bloomberg reports on a visit by Apple CEO Tim Cook to Foxconn’s plant in Zhengzhou, China, where iPhones and iPads are made, among other devices.

Cook’s trip to Zhengzhou followed a meeting with Beijing Mayor Guo Jinlong on March 26 and with Chinese Vice Premier Li Keqiang on March 27. Apple’s Wu said earlier those meetings were “great,” without providing details on their content.

Vice Premier Li told Cook Chinese authorities will make an effort to strengthen intellectual rights, but also asked for more attention in caring for workers in Chinese factories. Apple recently found itself in the middle of a debate surrounding working conditions in China – a debate spurred by false allegations by performer Mike Daisey, and a series of investigative reports by The New York Times. In February, the Fair Labor Association began an inspection of Apple’s suppliers.