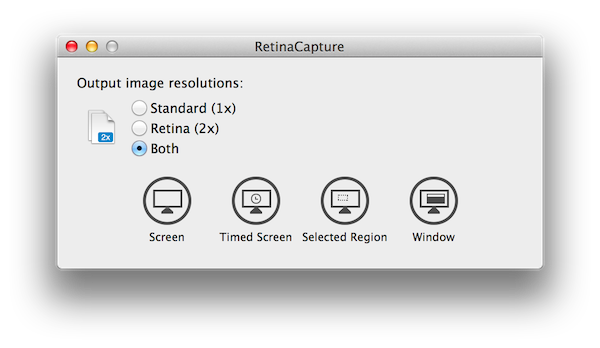 If you have a new MacBook Pro with Retina display, you’ve likely stumbled upon the issue of sharing screenshots that are too large in size for friends or coworkers who don’t have a Retina Mac yet. Or, perhaps you’ve wanted to be able to take both 1x and 2x screenshots for, say, a blog post served to Retina and non-Retina devices.

RetinaCapture is a new, free utility for Mountain Lion that does just that: it enables you to easily take crisp screenshots at both resolutions, at the same time. On a Retina Mac, just fire up the app, and choose whether you want your screenshot to be at 1x, 2x, or both. You can take a normal screenshot, timed screenshot, capture a window or a portion of the screen. Hit the button, and save your image. If you’re saving 1x and 2x files at the same time, the app will offer two naming schemes to name your images correctly. Either at 1x or 2x, screenshots will always be crisp and detailed.

RetinaCapture is available here for free. As a side note, if you’re not on a Retina Mac, you can test the app’s 2x mode by enabling HiDPI using Quartz Debug.