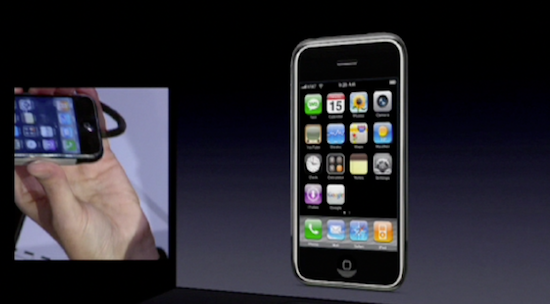 Amidst all the speculation and conjectures surrounding Steve Jobs’ resignation as Apple CEO last night, Google’s Vic Gundotra has shared a great little anecdote about the former CEO’s proverbial attention to detail and willingness to get even the smallest wrong piece of interface fixed in order to provide users with a great experience when using Apple devices.

Gundotra recalls an episode from 2008, when he got a phone call from Steve Jobs – Gundotra was head of mobile applications at Google at the time – but he didn’t pick up. Vic was attending religious services when “Caller ID unknown” called, so he chose to ignore the call. The call was from Steve Jobs, who left a message asking to be called back because it was urgent.

The problem Steve Jobs needed to get fixed was a wrong shade of yellow in Google’s webclip icon for the iPhone:

So Vic, we have an urgent issue, one that I need addressed right away. I’ve already assigned someone from my team to help you, and I hope you can fix this tomorrow” said Steve.

“I’ve been looking at the Google logo on the iPhone and I’m not happy with the icon. The second O in Google doesn’t have the right yellow gradient. It’s just wrong and I’m going to have Greg fix it tomorrow. Is that okay with you?”

Of course this was okay with me. A few minutes later on that Sunday I received an email from Steve with the subject “Icon Ambulance”. The email directed me to work with Greg Christie to fix the icon.

You can find Gundotra’s full post over at Google+ – Gundotra eventually became Google’s public face in the iOS/Android clash for the mobile space, but he says that episode taught him a lesson about how CEOs should always care about details. Even shades of yellow, on a Sunday. That’s symbolic of Jobs’ career as a CEO, and a message that will live on as Apple continues down its road with a different chief executive officer.