Steve Jobs And The iPad 27 Years Before The iPad 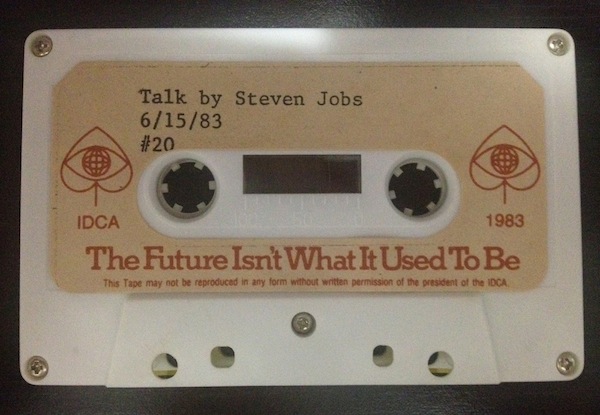 Matthew Panzarino has published a summary of a “lost” Steve Jobs speech from 1983 uncovered in its entirety by Marcel Brown. Brown was given a cassette tape with the full recording of a speech Steve gave at the International Design Conference in Aspen (IDCA) in 1983 (photo). During the speech, Steve shared some forward-looking ideas for the future of computing including what would become the App Store and, 27 years later, the iPad.

He says Apple’s strategy is to “put an incredibly great computer in a book that you can carry around with you that you can learn how to use in 20 minutes”. Does that sound like anything we are familiar with today? And they wanted to do it with a “radio link” so that people wouldn’t need to hook it up to anything to communicate with “larger databases” and other computers.

And about the App Store:

He thought that the software industry needed something like a radio station so that people could sample software before they buy it. He believed that software distribution through traditional brick-and-mortar was archaic since software is digital and can be transferred electronically through phone lines. He foresees paying for software in an automated fashion over the phone lines with credit cards.

Of course, progress itself is inevitable. But I don’t think it’s that easy – I don’t think we can dismiss innovations as “inevitable” or “obvious”. What supporters of the “inevitable” theory are missing is the work and vision and effort of dozens of people that it took to get there. In hindsight, it’s easy to look at any product and think it had to be in that way.

The speech uncovered by Marcel Brown is the perfect example of how some people, in this case Steve Jobs, have a vision that is only constrained by technology. A vision that, after years of research and design iterations, will become real and, at that point, “inevitable”.