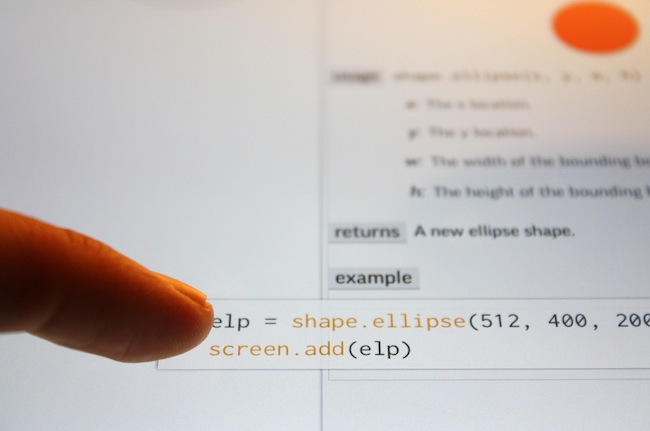 The app I’m using is Scriptkit, by Kyle Buza, and it allows you to drag and drop snippets of code from a library of well-annotated APIs. The goal? Rapidly prototype your app ideas on the very device you’re looking to run them on. Sure, you’ll still get your hands dirty on the iPad keyboard from time to time, tweaking the X/Y values determining size and shape of a button, for instance, but building a functional app really isn’t much harder than a few taps and a few drags–especially if you already know what you’re doing (which I don’t).

Only last week, I wrote:

I believe that, going forward, Pythonista and other similar apps will show a new kind of “scripting” and task automation built around the core strenghts of iOS.

I had no idea ScriptKit existed, but this is exactly what I was referring to in my Pythonista article. Yes, ScriptKit is limited, it’s confined in its own sandbox, and its initial set of APIs could use some additions. But look at what ScriptKit already enables: a touchable programming interface for building prototypes that use real data (Facebook photos, Dropbox files, etc) with real iOS core elements such as Camera and Location Services. Developers can use ScriptKit to build quick working prototypes; users with an interest in scripting like me can learn a basic syntax to build scripts and app demoes that may lead to bigger interests in other areas of iOS and languages. All within a touch-based interface, with real APIs, on an iPad.

Codea, Pythonista, ScriptKit – the future of iOS couldn’t be more exciting to me.