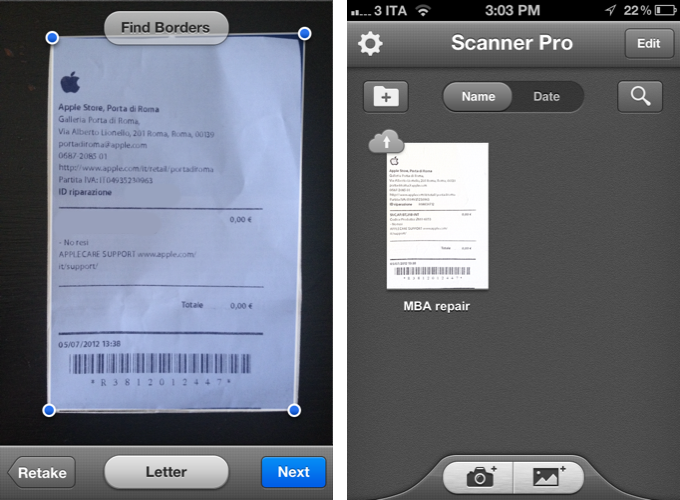 Scanner Pro by Readdle is a powerful application to use your device’s camera to scan receipts or just about any document on the go. When version 4.0 was released, I was positively impressed by the iPad version, which sported an elegant interface and a terrific set of functionalities to turn photos into documents while adjusting borders and colors through multitouch. The app also came with Evernote and Dropbox integration, making it easier to, say, automatically upload scanned items into the same Dropbox folder also used by Readdle’s PDF Expert.

Last night, Readdle released a major 4.1 update to the app that brings the new UI design to the iPhone version, and adds iCloud sync for scans. Readdle writes:

Having introduced Scanner Pro 4 two months ago, we released an iPad version of Scanner Pro (making it universal) with a revamped interface and applied a bunch of new things we’ve learned from Scanner Pro users during the last 3 years. The latest version of Scanner Pro (4.1), brings a completely new interface to the iPhone, focusing on the most important things to make the scanning process easier and more intuitive. With Scanner Pro 4.1 users will enjoy the new design and experience, which are consistent on both iPhone and iPad.

In my tests, I installed Scanner Pro on my iPhone, and scanned a receipt from the Apple Store. After some basic cropping, I went back to the app’s main screen, and noticed an iCloud indicator that made it clear the app was uploading that scan to the cloud. I then updated the iPad app, and, after confirming I wanted to use iCloud, seconds later the scan was there. While it was downloading the item, the thumbnail preview was slightly dimmed and the iCloud indicator progressively filling in blue. This is a good iCloud workflow and seamless presentation to the user.

Scanner Pro was already a solid app, and this latest update adds the convenience of using the iPhone’s camera – particularly with the 4S, you’ll undoubtedly be producing better results than the images returned by the iPad’s camera. All of the features I mentioned in my review of version 4.0 are still there; as a bonus tip, iCloud integration means you’ll find PDF documents on your Mac as well by visiting the Mobile Documents folder inside Library (and perhaps you could set up a Hazel rule to automatically rename those scans or mirror them to Dropbox).