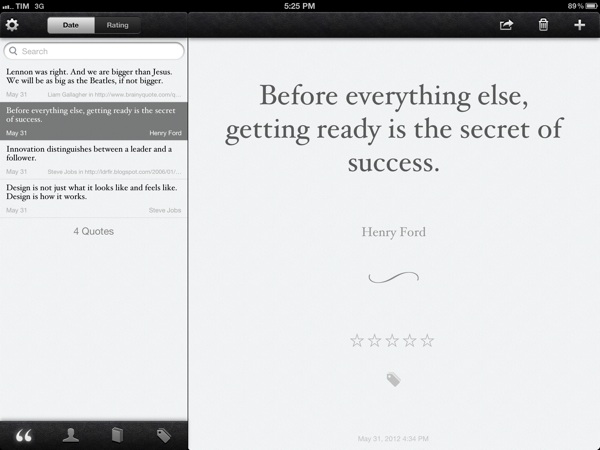 Last year, I reviewed Quotebook, an iPhone app to save your favorite quotes, and organize them by tags, authors, and sources. I wrote:

Quotebook’s greatest strength is that it’s built for quotes, and nothing else. It doesn’t want or need to be a replacement for your notes and daily thoughts. The interface has been designed to make it easy to jot down a quote, and set correct attribution like author and source, or perhaps fiddle with ratings. The app goes one step further and makes it super-simple to import quotes found in your iPhone’s clipboard, and plays nicely with @author names, automatically opening a Twitter profile within a web view. That’s very nice of the developers — this got me started on saving some tweets I find inspiring. Quotes can be searched and filtered, shared on Twitter, Facebook and Tumblr, or browsed by author and tag using the buttons in the bottom toolbar. Pretty standard stuff for an iPhone app.

Months in the making, Quotebook 2.0 has been released today, and it’s a major update that makes the app universal, and fully iCloud-enabled so you’ll be able to keep your Quotebook archive in sync across the iPhone and iPad.

I have tested the new version, and it’s a solid update that you should definitely check out regardless of whether you’re a new user, or haven’t launched Quotebook in a while (in that case, you’ll get version 2.0 for free). iCloud sync has been implemented reliably, with fast sync times across devices and clear, and visible settings to indicate if iCloud is turned on or disabled. The app syncs full quote information, including ratings and tags. An export feature is still available to back up your database on a computer, and of course you can share quotes on a variety of networks including Facebook, Tumblr, and Twitter (with iOS 5 integration). The iPad interface is simple and elegant, with a purposeful focus on content and a subtle leather texture that, I believe, is functional to the app’s core concept – being a notebook for your favorite quotes.