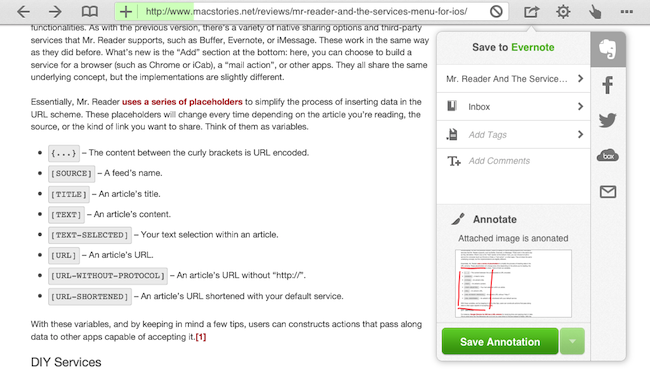 Dolphin, an alternative browser for iOS that I covered in 2011, has been updated today to version 6.0. Google Chrome is my go-to browser on iOS, but I had been testing this new version of Dolphin because of one feature: a native Evernote clipper.

Dolphin comes with lots of features and design choices, some of which I don’t like (case in point: the tap & hold popover menus). Given how Chrome keeps my tabs in sync across the iPhone, iPad, and Mac, I have no use for Dolphin’s Connect service and extensions. However, the built-in Evernote integration intrigued me as no major iOS browser to date has offered a native clipper for web content: some of them offered a bookmarklet-based clipper, but the experience of clipping URLs and text selection left much to be desired. Dolphin’s clipper is baked into the app, and it’s accessible from an action button in the toolbar.

The Dolphin clipper automatically grabs a webpage’s title and current selection (if any). It uses your default notebook as destination, and it lets you add tags and comments to a clipped item. Like the desktop Evernote clipper, you can save a full page, or just an “article” if the app recognizes you’re trying to clip a blog post. One thing I’ve noticed is that, in spite of my attempt to clip rich text, web clips from selections were sent to Evernote in plain text; when I chose “save full article”, Dolphin saved the page as rich text into Evernote, and quite beautifully as well.

A feature I really like is the possibility to annotate webpages before sharing them. This works with other sharing services in Dolphin, not just Evernote. There’s only a red brush and an eraser to choose from, but it’s enough to draw attention to a portion of a page and save it as a 768x924 .jpeg file in Evernote.

If you’re an Evernote user and have been looking for a better iOS web clipper, check out the latest Dolphin Browser for iPhone and iPad.