Decline, plateau, decline: New data on The Daily suggests a social media decline and a tough road ahead 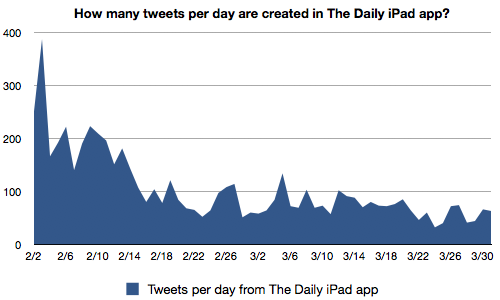 The data doesn’t look good for The Daily. Its activity on Twitter seems to match my own perceptions of how they’re doing — an early rush of excitement; a decline as people lost interest and the app struggled with technical problems; a plateau once the tech got sorted out; and then another decline once the app started charging users.

The data here only takes tweets into account, and not the actual number of The Daily subscribers. While there has been a general decline in tweets with occasional upticks depending on the content being promoted for that day, I ask whether this is a fair assessment of the number of people using The Daily versus how people use The Daily. I know for a fact that I would share articles I found interesting on Twitter, but would somebody like my parents who’re switching to a digital format even bother? Once I tweet an article on Twitter, what return am I getting out of it? As MacStories writers, our whole audience is interested in tech (specifically Apple news), thus I don’t know if I’m going to see a lot of retweets if I share a sports article. Too, the social implementation in The Daily isn’t as user friendly as it could be, and without the flow that apps like Flipboard have, you’ll certainly see a decline in interest over time. The next thing to look at would be whether Facebook sharing declined and how many people are utilizing The Daily’s comments section (and audio tool).

I don’t argue that The Daily isn’t seeing a decline in readership, but I want to see (though probably impossible) heat maps of how customers are interacting with articles, complaints on Twitter about usability, and most importantly subscriber numbers. The Daily certainly got its fair share of promotion in the media, but are people prepared to move from finding free content on the Internet into a dedicated news source that they have to pay for? We’ll save these ideas for another time, but Joshua Benton has shown that social interactions with The Daily have seen a substantial decline.