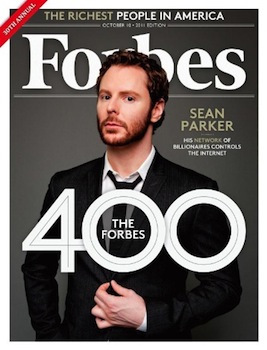 From the press release about Forbes’ annual list of 400 Richest Americans: [via]

Former Apple CEO and now Chairman of the Board Steve Jobs ranked at #39 with $7 billion. Jobs ranked at No. 42 last year with $0.9 billion less; globally, Forbes ranked Steve Jobs at #110 earlier this year. Also seen in this year’s list: Amazon’s Jeff Bezos (#13), Facebook’s Mark Zuckerberg (#14). Zuckerberg is this year’s “biggest dollar gainer” by adding $10.6 billion in the past 12 months. Google’s Sergey Brin and Larry Page ranked both at No. 15 with $16.7 billion each.

Forbes has a complete analysis of their list here. Combined, the nation’s wealthiest are worth $1.53 trillion.