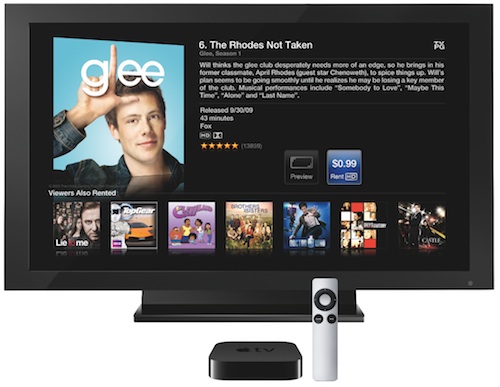 As first noted by AppleInsider, Apple has removed all options related to TV show rentals on iTunes, the Apple TV’s dedicated interface and its website, deleting a support document that detailed how users could rent episodes using credit in their iTunes accounts. .99-cent TV show rentals were unveiled last September as part of the Apple TV 2nd gen announcement, and touted as a big new feature from Apple with both ABC and Fox on board with their shows. Others, however, dismissed the initiative as a threat to the TV business model – prices were too low according to TV studios. TV shows could be rented from the iTunes Store and watched on a Mac or Windows PC, iPhone, iPad, iPod touch, or Apple TV. Users had 30 days to begin watching a TV show, and 48 hours to complete it.

Today, Apple confirmed to AllThingsD that, as customers prefer buying TV shows, they’ve canceled the rental program entirely. Instead, Apple is now recommending iTunes in the Cloud, an iCloud functionality already live for customers that allows for re-watching and streaming of any previously purchased content on any device. The option was introduced with the latest Apple TV software update.

iTunes customers have shown they overwhelmingly prefer buying TV shows,” Apple spokesman Tom Neumayr said. “iTunes in the Cloud lets customers download and watch their past TV purchases from their iOS devices, Apple TV, Mac or PC allowing them to enjoy their programming whenever and however they choose.

Apple is rumored to be working on a new technology to deliver video to televisions, but right now, the only option for purchasing, streaming and re-downloading TV shows remains iTunes in the Cloud.