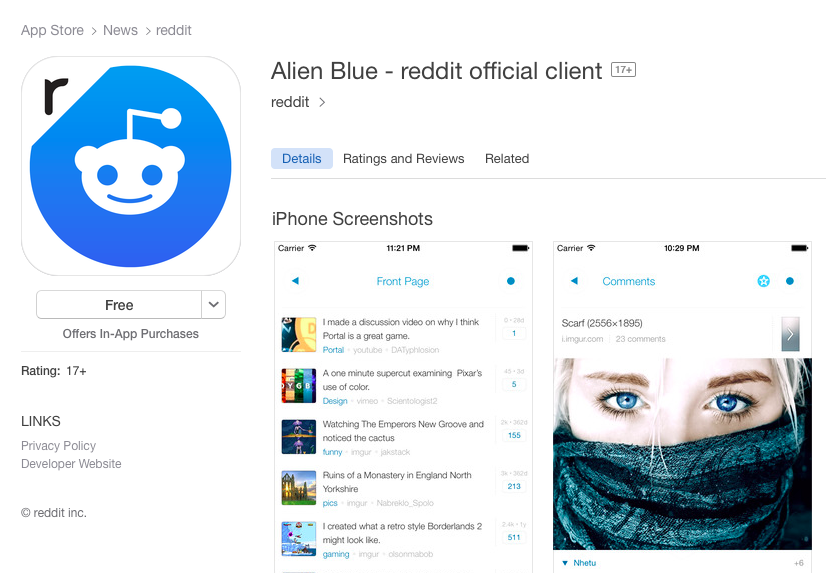 Alien Blue, perhaps the most popular third-party Reddit app available on iOS, has been acquired by Reddit. Greg Kumparak writes at TechCrunch:

We heard whispers of this deal going back a few weeks. While reddit isn’t disclosing terms, they’ve just confirmed to me that they’ve acquired the Alien Blue project and that its Melbourne-based developer, Jase Morrissey, will be joining their team.

Curiously, reddit seems to hesitate in calling the app their “official iOS reader” — they’re keeping the “Alien Blue” name, for example, rather than changing it to just be called “reddit” or “reddit reader” or something.

I’ve covered Alien Blue several times here at MacStories over the past five years – it’s always been a fantastic Reddit client packed with nice design touches and powerful functionalities to customize the way you read Reddit, browse sub-reddits, and interact with comments. It’s interesting to see Reddit acquiring a power-user app such as Alien Blue rather than more simplistic and minimal clients, and it makes me wonder if the company will keep on adding features for reading and user management, or if they’ll begin to simplify the app and remove its advanced features (always been a fan of subreddit grouping and iCloud sync in the app).

Alien Blue joins the dedicated Reddit AMA app on the App Store, and it’s available in two versions for iPhone and iPad; Reddit is keeping the app’s “Pro” In-App Purchase, but to ease the transition to the separate app, they’re offering it for free for a limited time.