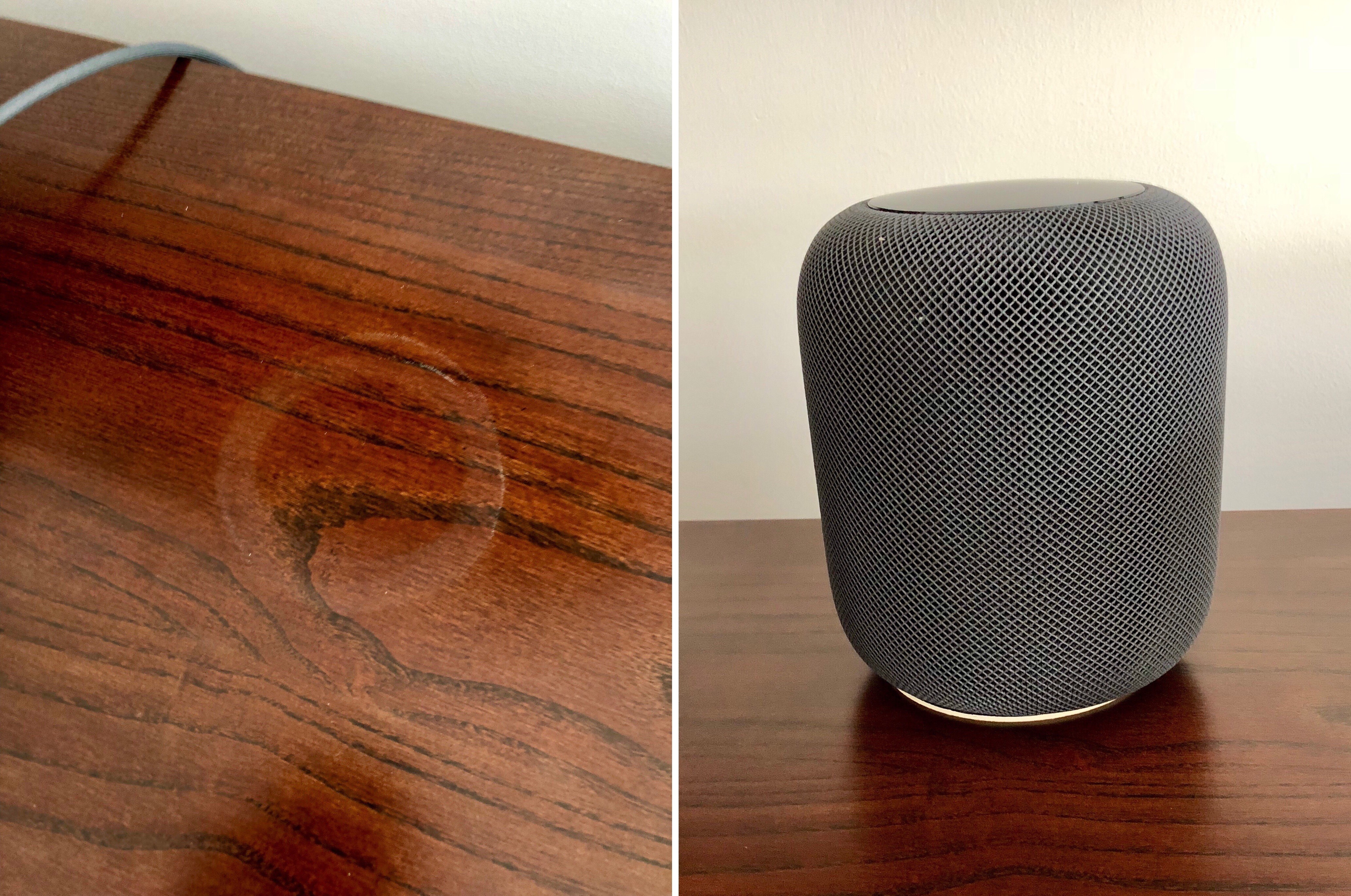 Nearly a week after its launch, HomePod owners are discovering that in some cases, the device leaves a white ring in its place when stored on wood furniture. John Chase of The Wirecutter reports:

An unhappy discovery after we placed a HomePod on an oiled butcher-block countertop and later on a wooden side table was that it left a defined white ring in the surface. Other reviewers and owners (such as Pocket-lint, and folks on Twitter) have reported the same issue, which an Apple representative has confirmed. Apple says “the marks can improve over several days after the speaker is removed from the wood surface,” and if they don’t fade on their own, you can basically just go refinish the furniture—the exact advice Apple gave in an email to Wirecutter was to “try cleaning the surface with the manufacturer’s suggested oiling method.”…In other testing, we have seen no visible damage when using it on glass, granite countertop, nice MDF, polyurethane-sealed wood, and cheap IKEA bookcases.

Among the MacStories team, Federico and John have both encountered this issue, while I have not. Serenity Caldwell of iMore explains the inconsistency:

Not all whole-wood table finishes are alike: Certain wood oil treatments include drying agents that have organic compounds present in them — compounds that could potentially interact with the silicone in Apple’s base.

It appears that for those who will face this problem, it doesn’t take more than a couple days for the white ring to become at least faintly visible. If you’re not seeing anything after several days of HomePod use, it’s likely that your furniture will be fine, but if you’re concerned, using a coaster seems like the best low-budget fix at this point.

Update: Also per Serenity Caldwell, Apple has now put together an official support document, dubbed “Cleaning and taking care of HomePod.” It provides official details regarding HomePod and wooden surfaces:

It is not unusual for any speaker with a vibration-dampening silicone base to leave mild marks when placed on some wooden surfaces. The marks can be caused by oils diffusing between the silicone base and the table surface, and will often go away after several days when the speaker is removed from the wooden surface. If not, wiping the surface gently with a soft damp or dry cloth may remove the marks. If marks persist, clean the surface with the furniture manufacturer’s recommended cleaning process. If you’re concerned about this, we recommend placing your HomePod on a different surface.

The new document also addresses the matter of cleaning HomePod – only with a dry cloth, or, if necessary, a slightly damp one – and informs users to keep HomePod away from liquids and heat sources.