When something works, don’t touch anything. When a software just works, it’s still possible to make it work better. I think this is the rule that Silvio Rizzi followed when thinking about the new version of Reeder, the feeds reader application I reviewed some months ago, calling it the best RSS reader for iPhone. Reeder 1.x was a great application, but as time went by it started to fall under the pressure of the features new applications such as MobileRSS, Newsprint or Newsrack introduced, and as consequence to this people started complaining about Reeder and Silvio not caring much about it anymore.

They were so wrong. Silvio has been working hard on the just-released 2.0 version, a free update for previous Reeder users that introduces some new functionalitites, and a lot of tweaks under the hood that make Reeder feel completely new, and fresh again.

You can call this a comeback.

From a user interface standpoint, Reeder 2 is based on the same UI principles of the 1.x version: a highly custom design which you either love or hate. I know many people who can’t stand the fake leather and paper look of Reeder, but I personally like it very much, as it’s just different from the rest. Pretty much nothing has been improved, changed or refined here, so if you were in love with the old look, there you have it. But speaking of the engine that powers Reeder, that’s where the new story is. 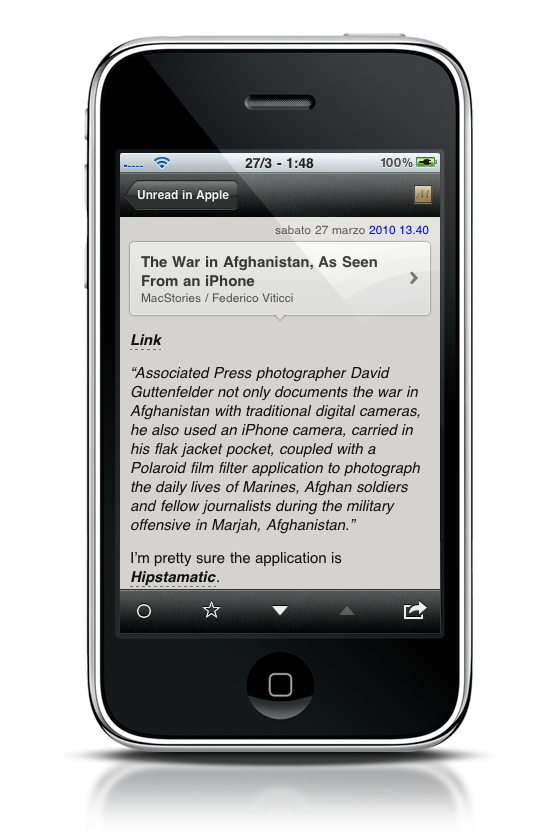 Silvio has been struggling to find a better solution to make Reeder 2 more responsive than its predecessor, and he’s totally accomplished the task. Syncing items takes a few seconds (2, to be exact, under wifi here) and the, overall, the app feels ready to work during the sync. In Reeder 1, there was this strange feeling that you had to let it sync before touching anything on screen. Not anymore. Reeder 2, indeed, doesn’t depend on CoreData, it’s entirely based on a direct access to SQLite, which makes things a lot faster. Speaking of sync, Reeder can now fetch articles from the people you follow, shared items and, optionally, your already read items as well. Also, you can tell the app to cache images, which was a much requested feature.

Another cool new thing about the update, is the state saving functionality: just like Tweetie 2 remembers what you were doing the last time you closed the application, so does Reeder 2 now. So, you don’t have to be afraid to receive a phone call while you’re catching up with the news. Other features include a setting for higher contrast and bigger fonts, support for additional services like the Instapaper Mobilizer and a more useful services panel.

Reeder 2 is a great update, for an already great application that needed some adjustements and refinements to stand tall once again.

You don’t even have to consider a download. Just buy it. [iTunes Link]