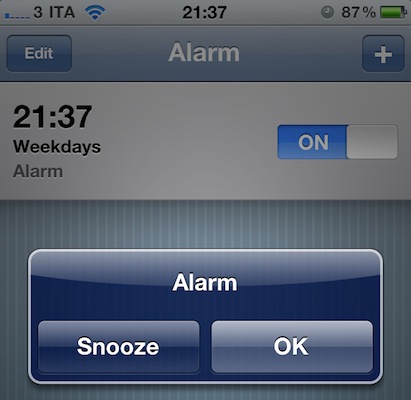 The New Year broke the iPhone’s built-in alarm clock app. After much of a backlash on the Internet (and too good reason, people depend on alarms to wake up in the morning and, you know, do stuff like go to work) and a temporary fix that involved setting a repeating alarm on the device, Apple then reassured everyone that the bug would auto-magically fix itself on Januar 3rd. That didn’t happen for many, as seen both on Reuters and Apple’s own Discussion boards. If you’re running an iPhone or iPod touch and you still can’t manage to get the device to work with alarms, the solution might be easier than you think.

Several users on Apple Discussions are suggesting that a simple power cycle (reboot) or “soft reset” can fix the iPhone software to work correctly with alarms after January 3rd. By “soft reset” they mean the procedure that involves pressing both the sleep / wake and home buttons until the Apple logo appears on screen. This will force the iPhone to dump its temporary stored files and should fix the alarm clock app woes. If you rebooted your iPhone before today and it didn’t fix the problems, do it again now.

The clock app on my iPhone 4 (with iOS 4.2.1) is working just fine both with single and repeating alarms, but I think a reboot or two happened in these past days. I have a jailbroken device so reboots and “resprings” are very frequent. If you’re still experiencing the alarm issues, you can give the method above a try and report back.