Right after Twitter announced the acquisition of the popular Tweetie app from Atebits’ Loren Brichter, many third party developers of Twitter clients started complaining that Twitter just killed the platform by entering the market itself. We may have different positions on this, but that’s not the point.

Point is, there are lots of developers out there who don’t care about “the big names”, they just want to keep developing for the sake of it and for the user base they’ve managed to build. I respect these guys. There’s a problem though: what about those that come up with new apps now? It shouldn’t be easy, knowing that you’re just getting started and Twitter is about to release the best mobile Twitter client ever made…for free. It’s a difficult situation, but fortunately there are some developers who love challenges and are releasing their apps anyway.

Meet Icebird, a new Twitter client for iPhone which I’m falling in love with.

Icebird is an application I’ve been following  for some weeks now, it’s developed by Fabian Kreiser and it finally got approved tonight. I woke up and found the app in the App Store, waiting for me to try it. It comes at $3.99 in the App Store, and that might sound a little bit pricey. I think it’s worth the money though, especially if you’re always living on the edge, trying new software and believing in new apps. If so, you’ve got to try Icebird. 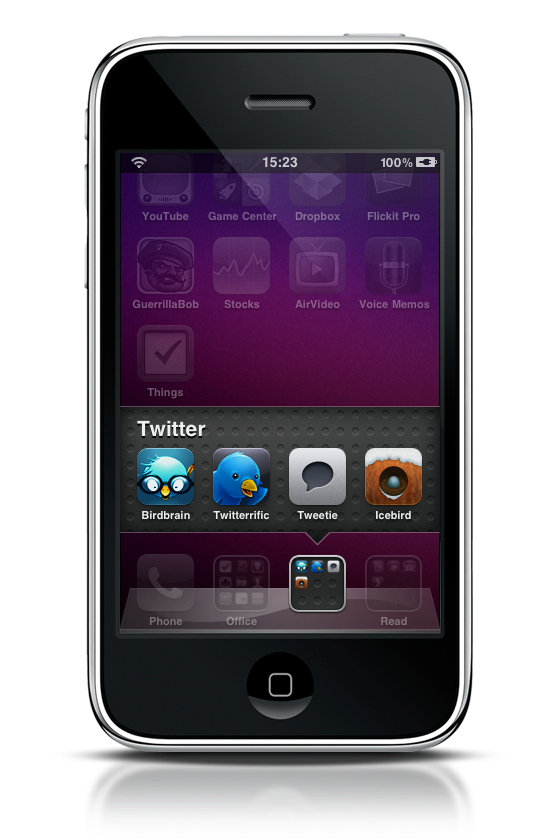 Icebird is focused on simplicity and ease to use. It sports a great icon, an elegant interface and support for multiple accounts. Thank God it also allows you to quote tweets and doesn’t come only with native retweets (yeah, I’m looking at you, Twitterrific). I had to mention this, as it is a feature many users ask before purchasing an application for Twitter. Like I said, the icon looks great - which is good because you want to keep it on the first page of the home screen just to look at it. If you’re into well designed interfaces, you know what I’m talking about. When you fire up the application for the first time you’ll be asked to enter the credentials for your Twitter account, and the login screen is nice too. Once you’ve logged in with your account you’ll be presented with the main screen of Icebird, let’s call it the Dashboard. 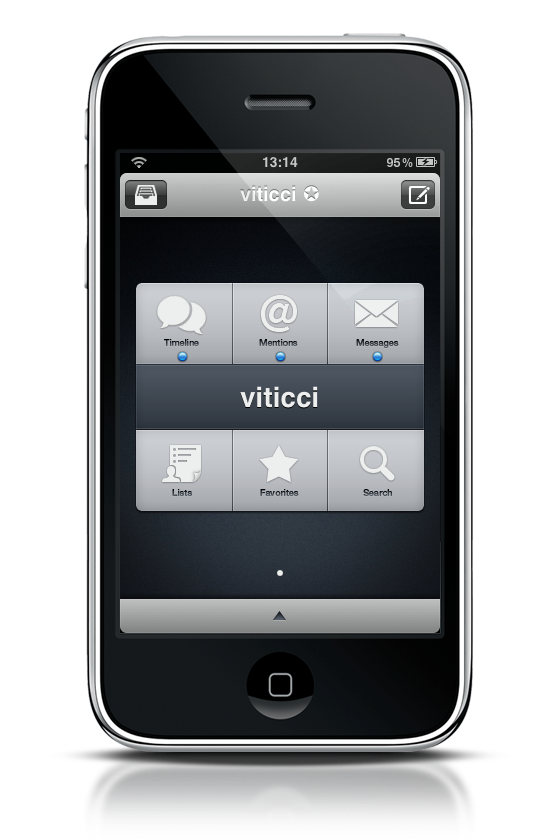 Here you can navigate through your account, much like Osfoora lets you do. I think that Icebird realization is better than Osfoora’s, as it’s cleaner and minimal. I like it, and swiping left and right to access all the configured accounts is a real pleasure. I also liked the possibility to tap on the triangle at the bottom to bring up the settings and trends: it’s unobtrusive and it’s there when you need it. From the dashboard you can access your timeline, mentions, messages (threaded), lists, favorite tweets and search for tweets or people.  Also from the same screen, the inbox button in the top left corner is nothing but drafts support, which makes Icebird a perfect replacement to Birdhouse too.

The timeline view is simple and well designed, and it somehow reminds me of the good & old Birdfeed. Tweets are in the shape of bubbles (just take a look at the screens) and have different colors depending on their nature of simple timeline tweets, mentions or your tweets. Mentions are yellow-ish, tweets are white and your own tweets are green. Also in the timeline Icebird feature the always-good “Pull down to refresh” command, and I appreciate it. It’s become natural for me to use this gesture, which I think every other Twitter app should implement now. But how do you interact with tweets? Remember, Icebird is geared towards simplicity, and things are kept as simple as possible here. There’s no Tweetie-like swipe on tweet menu. There’s popup menu that should appear on screen if you hold a tweet, but there’s a minor bug which doesn’t let me tap on it. Perhaps it’s just OS 4.0’s fault. If you want to do stuff with tweets, you have to tap on them. This opens the single tweet view screen, which is pretty similar to Tweetie 2 and allows you to perform many actions including faving the tweet, reply to the author, quote it and retweet it, show conversation if it’s a reply and even copy the link or forward tweet as reply. Very nice. Unfortunately there’s no support for Instapaper, but I can see that coming with an update. 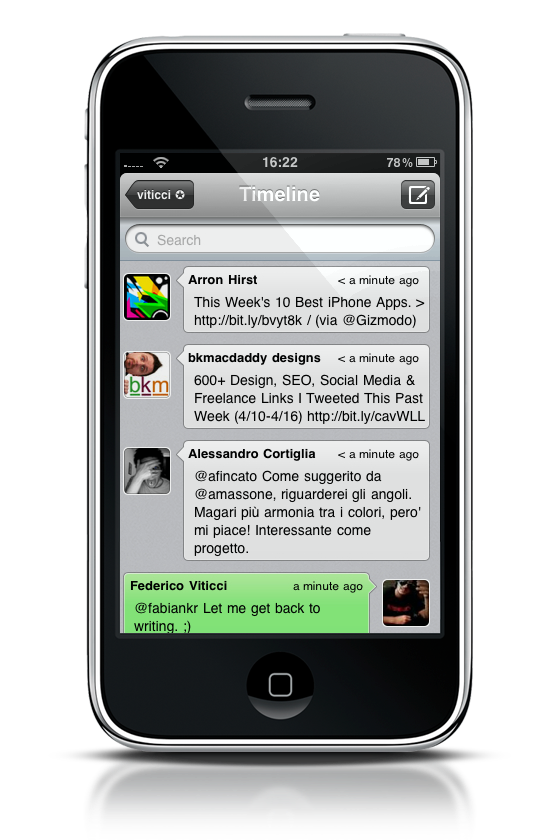 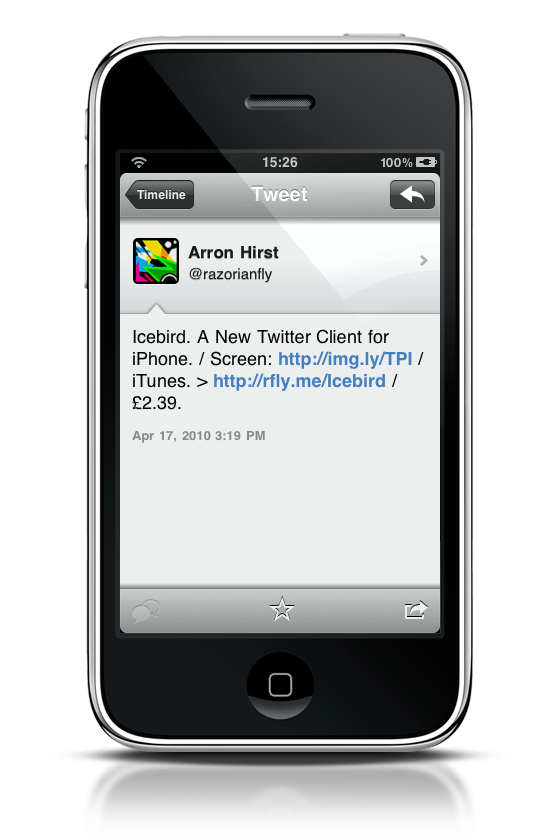 If you, however, decide to tap on the author pic you’ll see another screen, the profile view, which contains a lot of stuff as well. Besides description, user avatar, followers and following (which you can browse!), you can see all the tweets from that person, mentions, favorites and lists. You can follow, unfollow and add to a list. I found myself enjoying a lot navigating through users, then see followers and tap on another user’s profile. This is deep navigation, and we like it. 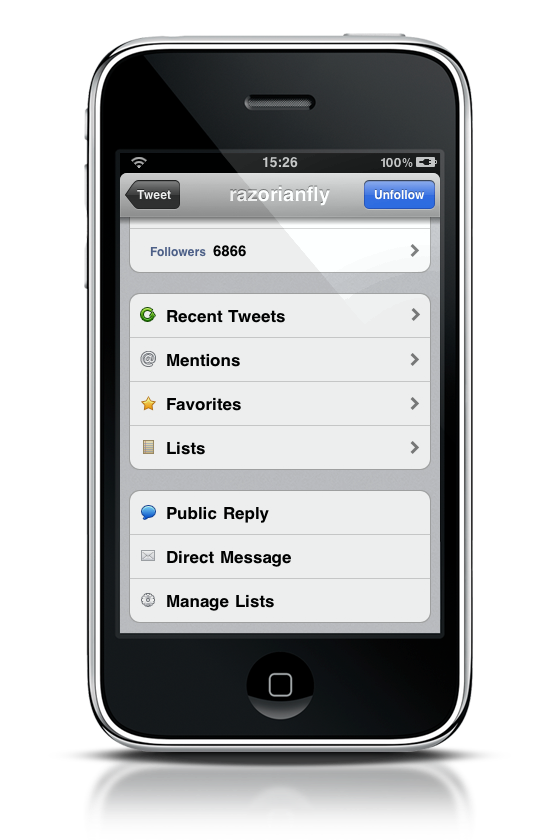 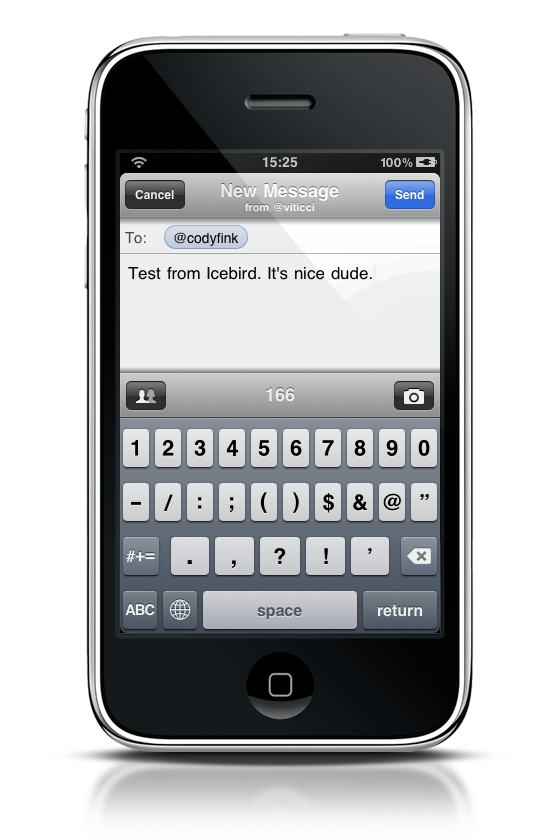 When it comes to tweeting, Icebird is simple again. You can enable geo location, tap on the user button to choose a follower to mention, select a picture. There’s no URL shortening support or other features, and while this might be ok to keep the app straightforward, I’m pretty sure some basic elements will be implemented soon.

Last, Icebird suprised me for its speed (it’s seriously fast, both in animations and refreshing tweets) and for the fact that it perfectly remembers where you left it the last time. Going back to Icebird feels like multitasking.

I’m definitely in love with Icebird. It feels fresh, stable, fast, it’s a pleasure to tap around, reply to people and find new users. And it the developer is gonna add that small features I’ve mentioned above it will be perfect to me. But anyway, it just feels right. Is it better than Tweetie? Sure it’s different. And on the iPhone, I needed something like this.

You can download Icebird here. Welcome to my home screen.