Once upon a time, Apple announced a white version of the iPhone 4. Hell, Steve Jobs even carried one on stage. It should have been out by July, then it got delayed. And again. And again. Then rumors about manufacturing problems started circulating. You all know the story. So what do we have here? A “gentleman” spotted at a private even in New York City by the guys over at PocketLint, carrying an iPhone 4 and giving out some details about the facts behind this white unicor - I mean, iPhone.

Say what you want, but this smells an awful lot like a controlled leak by Apple. I don’t know, some guy goes to a press event where he knows someone from the actual press is going spot the unit eventually, lets people take pictures of the device and confirms that the problem with the delays is with manufacturers?

Well, according to our jacket wearing gent, Apple is having trouble getting its two suppliers in the Far East to match the white used in the manufacturing of the parts. The white home button colour doesn’t match the white front face plate colour, it turns out.

Apple being the perfectionist that it is, isn’t happy with this and therefore isn’t happy to sell it to the general public, supposedly.

Oh, and the gentleman also said Apple’s campus is filled with white iPhones and that a friend hooked him up with one. Then he went to the press event and Pocket Lint spotted him. Sure. Sounds like a good plan.

Anyways, pictures of the magical and still-nowhere-to-be-found-for-mere-mortals are embedded below. We reported about color issues before, but we never were lucky enough to attend to parties full of gentlemen sent by Steve Jobs himself. 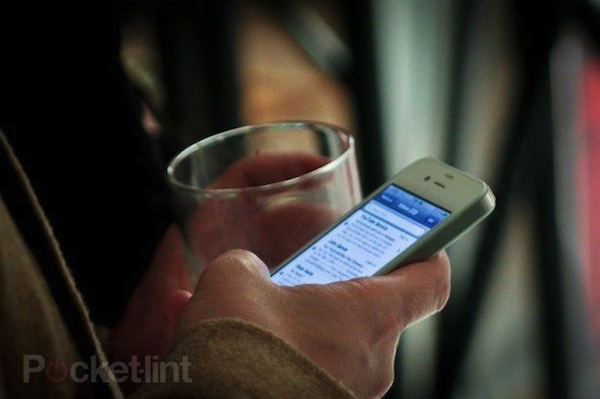