On the internet, some words are often overlooked. When something becomes “popular” or even a “trend”, the original concept is abused and misinterpreted. It happened with “interface”, it happened with “geek” and “hipster”, it’s happening with “curation”.

Curation: “The act of curating, of organizing and maintaining a collection of artworks or artifacts”

Curation #2: “The manual updating of information in a database”

With Apple’s “curated” App Store platform, geeks and casual users have started using the term “curation” in their parlance to refer to a collection of items regulated by terms and strict rules. With 250.000 applications and stories of rejections, curation suddenly became an internet-wide topic of interest for the everyday iPhone user. This is not what curation is all about.

Real curation requires effort, passion and experience. Curation takes time and requires a purpose. Curating something means you’re deeply involved in a specific matter and what you’re doing has a real purpose for future reference and usage. Still, digital curation is here and we have to deal with it. So let’s just reconsider the whole concept of curation by correctly applying it to the tools we’re provided nowadays.

It is possible to become a digital curator, but it’s not what you’ve been used to think up until now. You don’t become a curator by entering the App Review Team: digital curation doesn’t depend on any rules but the ones you decide to give context and meaning to the information coming your way every day. For this reason, it’s no surprise that the first service to receive “curation capabilities requests” was Twitter: the microblogging platform that has become a content sharing and news platform. Wouldn’t it be great to be able to “digitally curate” the stream, in a way that you could collect tweets, group them, give proper context to them? Geeks think so. I agree with them.

So Twitter curation tools started popping up everywhere on the internet. Storify, Keepstream, Bag The Web: all of them wanting you to collect content and save it in “packs” to show off to your followers or God knows what else. I think Twitter curation has to be more than that, that’s why I started using Curated.by and sticked with it: Curated allows you to create bundles, organize and group tweets inside them, give context to them. It also comes with a powerful Chrome extension that lets you collect and organize tweets from within the Twitter website itself; further integration with 3rd party apps is coming in the near future. What we have here today, though, is different: it’s not a new online service that enables you to curate and share groups of tweets. It’s an iPad app called “Tweet Library” which lets you curate, archive tweets and filter them from your iPad. It’s the first step towards digital curation on mobile devices. 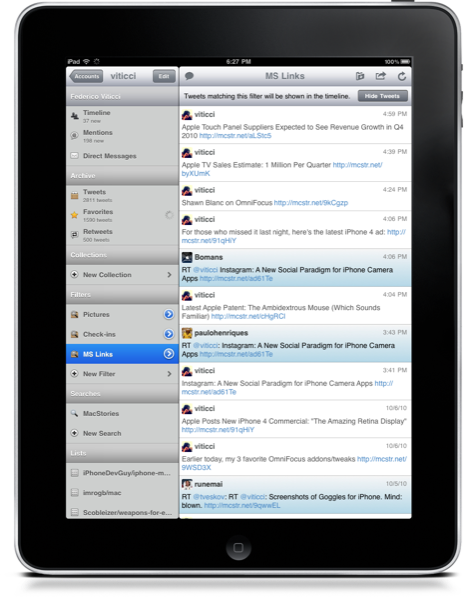 With Tweet Library you can curate tweets from your timeline, archive your own tweets, favorites and retweets, create and publish collections, filter tweets based on your specified criteria. It’s a full-featured application for all those who want to give context to what’s happening in the timeline, and save it for later. As a Twitter client, Tweet Library is not that big of a deal: you can tweet, fave and reply, but it’s clear that developer Manton Rece wanted it to be a way to act on the timeline, rather than a client to update your status. As a Twitter companion and curation tool, Tweet Library is a huge deal: with local and online exporting capabilities for tweet collections, it gives you the power to filter, archive and share tweets you may find useful and, looking forward, meaningful.

The app supports multiple accounts, but I decided to test it with my personal @viticci account as it’s the one I use to retweet and fave interesting tweets across the web. I tweet a lot and fave even more, so it took a while for the app to fetch all my tweets and store them locally on my device. Tweet Library can fetch up to 3200 tweets, but that’s a limitation imposed by the Twitter API - not much the developer can do about it. I’m happy with my latest 3200 tweets anyway, that’s fine. The sidebar (which is persistent like in Settings.app, and I love that) contains the 6 main section of the app: the Timeline, Archive, Collections, Filters, Searches. The Archive section is the one you’ll probably notice first, as it’s the one that’ll start saving your tweets in startup. Once the download process is done, everything feels pretty smooth and fast, even with 2598 favorites saved. Oh, and I’m running the app on iOS 4.2 (unsupported) and I haven’t experienced a single crash with the final version. Actually, I haven’t experienced a single crash since I started testing Beta 1, so that tells a lot about “good development”. In the Archive, you can search for specific tweets using the search bar on top, export via mail or CSV, filter by date or just send some selected tweets over to an existing collections. 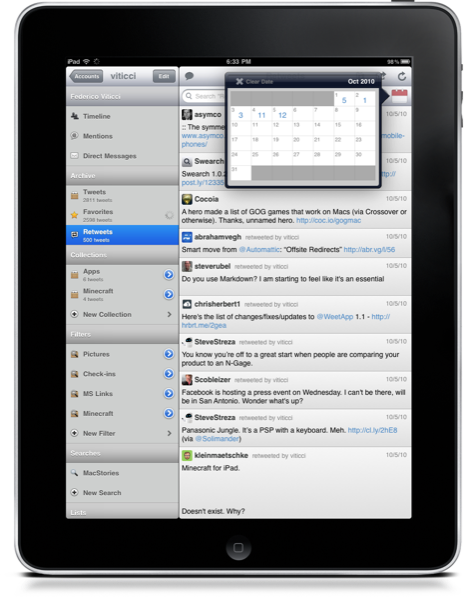 Collections are the most important feature of Tweet Library: just like Curated.by’s bundles, they are a way to group related tweets together and organize them for a future reference. Tweet Library’s implementation, anyway, is simpler than Curated.by’s one: you can only select a tweet (via an interesting popup menu on tap & hold) and send it to a collection. That’s it. You can’t comment or tag like you can on Curated, but we also have to remember that the app is at its first version and it’s an online service. It’s a native app. Still, it’s got some cool online features: collections can be published on tweetlibrary.com, and even though the website is new and doesn’t really offer much besides having a list of related tweets, big things are coming. I’m confident that the developer will collect feedback from this first version and decide what path tweelibrary.com should follow. Maybe it’s not ready for power users yet (such as Robert Scoble), but it’s a great way for the average user to collect tweets and share them with friends. What I really look forward to seeing in Tweet Library is integration with 3rd party (and official) apps and, why not, a bookmarklet to import tweets from anywhere. Just throwing it out there: a partnership with Curated.by would be killer.

Filters are another neat way to check on specific content from your timeline. Think of OS X smart folders: they only display content based on user’s criteria, and that’s exactly what Tweet Library’s filters do. The app comes with built-in “Pictures” and “Check-ins” filters to check on your friends’ latest photos and adventures in the real world, but you can create as many as you wish. It’s pretty cool because it’s like a Twitter search restricted to your own timeline, and not all that other crap you find on Twitter.com. Like a “curated search”. Of course Tweet Library also allows you to check on normal searches and lists, but I don’t like the fact that you can’t collapse sections in the sidebar. Waiting for an update.

Tweet Library is an app meant for letting you archive, collect and filter tweets. It’s great for conference tweeting, it’s a good tool for blogger when a new iOS beta comes out and they need to group tweets about new features, it’s a great app for users wondering “what happened to that tweet?”. Tweet Library is a searchable local archive of your Twitter activity, with promising online functionalities that show good room for improvement. At $9.99 in the App Store it might not be an app for everyone, but if Twitter curation is your thing, this is the best you can have on the iPad right now. Homescreen’d.