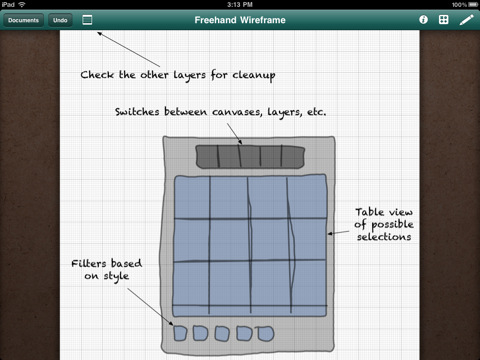 A major new version of OmniGraffle for iPad has been approved – and it’s one hell of an update. OmniGraffle 1.4 introduces full iOS 4.2 compatibility, which means the app can now store its persistent state when you switch to another application and can print your diagrams and wireframes using AirPrint.

The OmniGroup didn’t stop at new OS support, even though that would have been enough. They added an enhanced Document Browser with improved sorting and filtering options, stencil management and remote file syncing to iDisk and WedDAV.  You can now also create your own stencils from scratch and access a Font Inspector popover from anywhere.

What a great update. OmniGraffle for iPad is available at $49.99 in the App Store. Check out the full 1.4 changelog below. 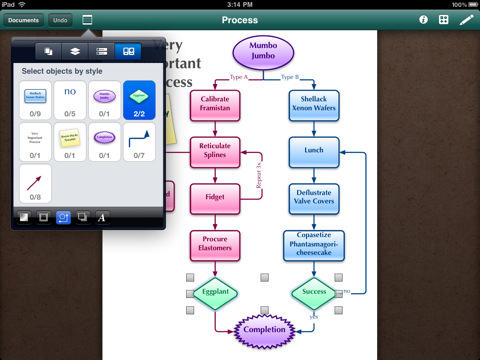 OmniGraffle 1.4 for iPad is a major update which adds support for printing and multitasking in iOS 4.2, improvements to the Document Browser, stencil management, remote iDisk and WebDAV support, as well as other improvements and bug fixes.

We love hearing from you! You can reach us by tapping Contact Omni in the Omni Menu (found in the document browser), sending email to omnigraffle-ipad@omnigroup.com, tweeting to @omnigraffle, or calling 1-800-315-OMNI or +1 206-523-4152.

• Printing - AirPrint support has been added for those users running iOS 4.2. Printing controls are accessible from the Document Browser. By default, all documents are set to fit canvases on one printer page, this setting can be toggled in the Canvas Size Inspector popover.
• Multitasking - OmniGraffle for iPad 1.4 takes advantage of Multitasking in iOS 4.2 to better maintain application state and perform tasks when in the background.
• The ability to selectively view documents based on file type has been added, users can choose to look at normal diagrams or at custom and downloaded stencils.
• The ability to change the sorting order in the Document Browser has been added as well, allowing users to view documents in a list based on title or modification date.
• A scrubber of sorts has been added to the bottom of the Document Browser view, providing quick navigation from one end of the list of documents to the other.
• Users are now able to create their own custom stencils from scratch.
• The ability to selectively show and hide any or all stencils in the Stencils popover has now been added.
• A server-side flag at Graffletopia has been put in place to expressly not show certain stencils that perform poorly or not at all on the iPad. Said stencils will not show in a search from within OmniGraffle for iPad.
• The Konigi Wireframe stencils now come bundled with OmniGraffle for iPad.
• Support to access and write to files at a WebDAV server or MobileMe iDisk account has been added. Documents in both the local and remote locations will be overwritten with a prompt to better facilitate round-trip operations for working with the same file. Documents can be exported and emailed natively or as PDFs and PNGs to WebDAV and iDisk as well as to the iTunes directory for access via the desktop.
• A new and improved Font Inspector popover is in place, making bold and italic typeface selection easier, and text can now be underlined.
• Various improvements to the Text Tool in Drawing Mode have been made.

• Better descriptive clues have been added to the controls to filter by style in the Selection view in the Contents popover.
• Locked layers are indicated as such in the Object List view in the Contents popover.
• Fixed a bug where it was possible to move a shape into a locked layer.
• The Text selection contextual menu now has a Select option for easier text selection.
• Fixed a bug where the Geometry Inspector steppers were not working properly if a file coming from the desktop had a custom ruler origin.
• Fixed an issue with Linear Blend fills not displaying properly if they had transparent outer colors.
• Fixed a bug where transparent canvas backgrounds would expose previous documents or views.
• Addressed some rotation snapping problems.