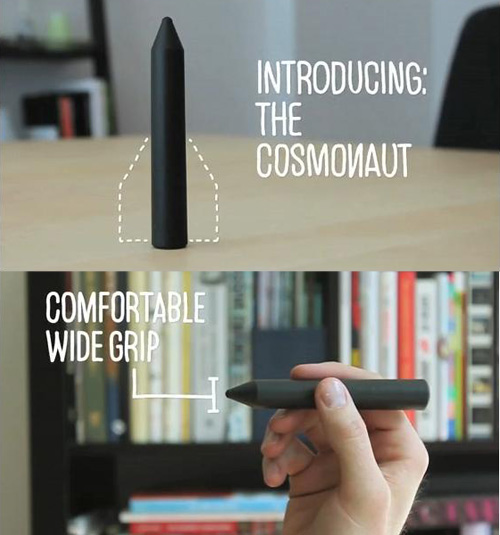 Last year before everyone was using Kickstarter, a new iPhone accessory showed up on the site and was a phenomenal success. It was “The Glif” - a tripod mount / stand. We’ve covered it’s rise to popularity here on MacStories. The creators of The Glif, Dan Provost and Thomas Gerhardt, are back with a new project, named The Cosmonaut.

The Cosmonaut is a minimal, wide-grip capacitive stylus for touch screen devices (not just the iPad). They modeled this new product after a dry-erase marker since it makes more sense on an iPad than a small stylus that people use on smartphones.

Dan and Thomas use their iPads for many different applications and the iPad is more like a dry-erase board than a PDA. They tested many different stylus and they all had the same result: they are designed to feel like a pen or pencil and don’t feel right with a large touch screen device. They also say tablets are ideal for low fidelity sketching and it’s awkward to rest your palm on the screen. Dan posted on The Russions Used A Pencil about this very idea right after they ended The Glif campaign; many people were interested so they decided to start designing a solution.

Besides trying this different Kickstarter campaign, they are also trying a different - and only one - pricing tier: $1. It’s a “pay-as-you-wish” method, and you can pledge whatever you want to contribute to the project. But there are some things to know before only pledging $1:

So far, The Cosmonaut has (and counting) backers for a total of ; there are 22 days to go and this is another excellent, well thought out idea. So if you want to help these guys make their goal, please consider contributing but read the info above and consider more than just a dollar.

UPDATE: In the 30 minutes since starting this post, the total has increased to over 300 backers and a total of $4500!