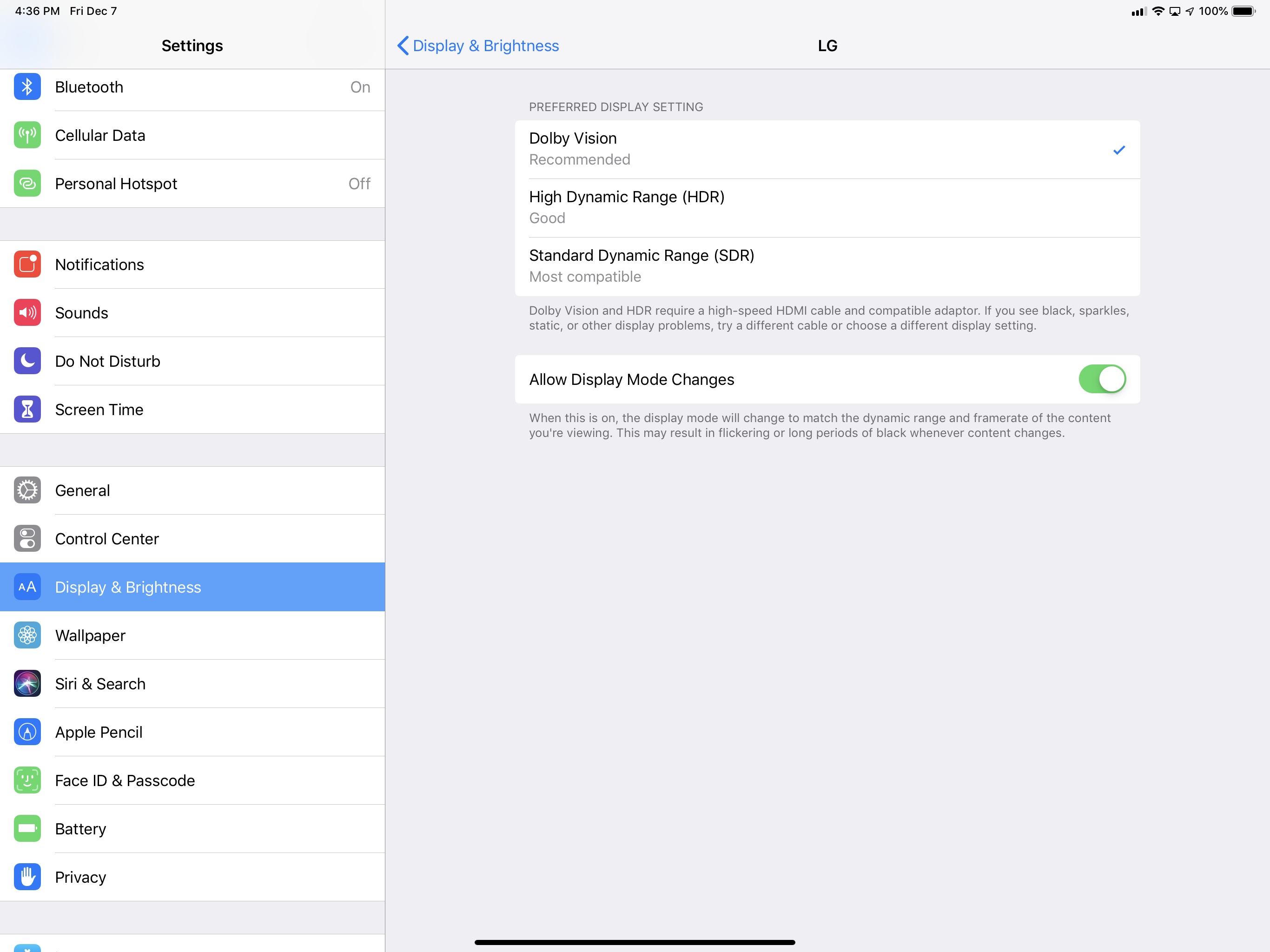 As I mentioned earlier this week, I have been looking forward to Belkin’s USB-C to HDMI adapter for the new iPad Pro since I discovered the accessory was announced on the same day of Apple’s Brooklyn event. The unique proposition of this adapter is support for 4K @ 60Hz video-out with HDR and HDCP 2.2, which, as I noted in yesterday’s iPad Diaries column as well, I haven’t been able to find in other USB-C adapters so far. I just spent 30 minutes playing with the iPad Pro connected to my 4K TV through this adapter, which arrived this morning, and I’m happy with the purchase, even though there is one significant drawback.

First off, this is one chunky adapter. It’s almost double the size of an Apple USB-C to USB-A adapter, the cable is slightly thicker, and the USB-C connector is larger as well (the plastic around the head of the connector, not the plug itself). I was surprised by the size given the adapter’s single port, but it’s not a big deal because I’m just going to throw this in a bag and forget about it anyway. 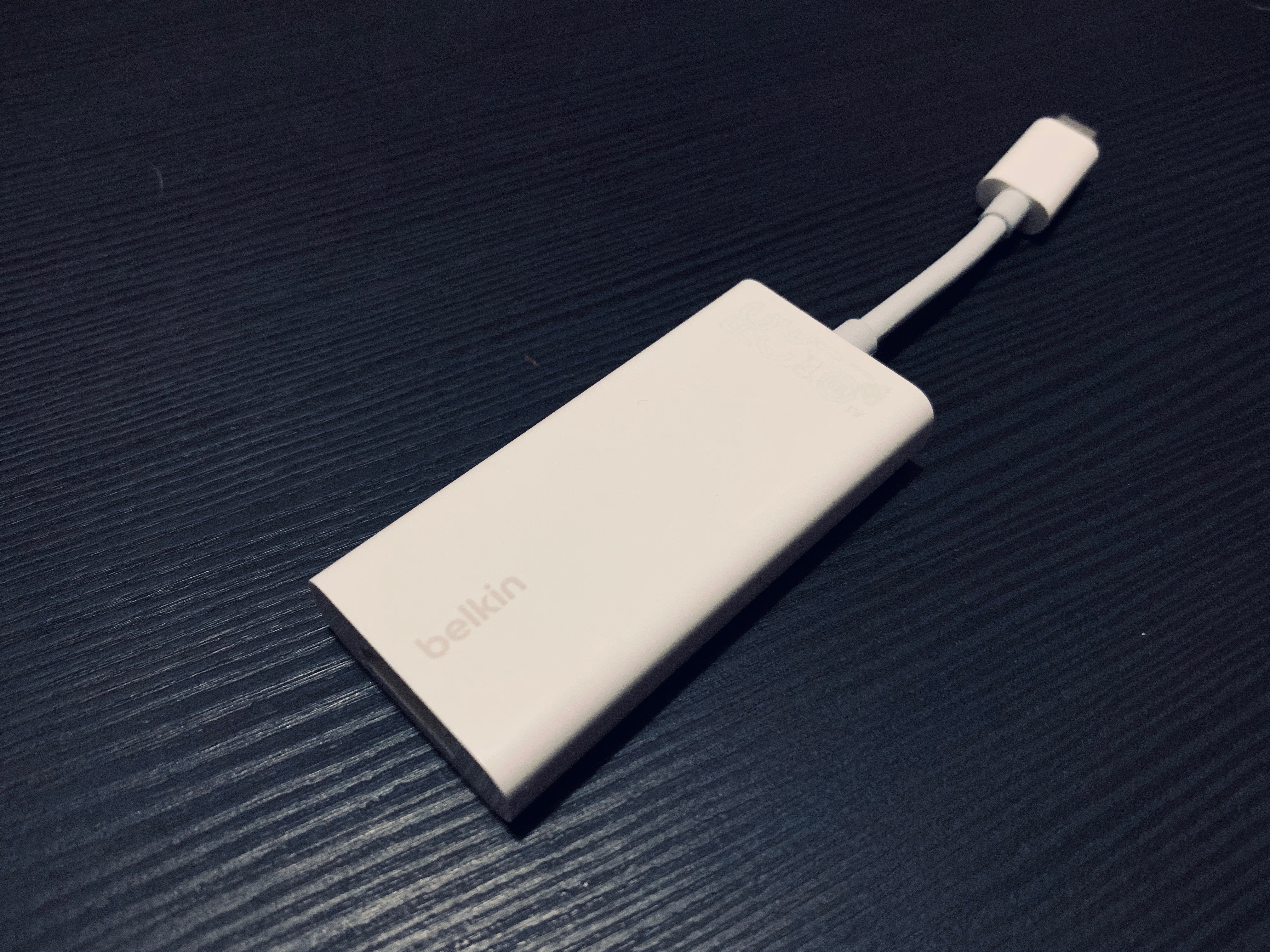 When it comes to promised support for 4K output and HDR, the adapter doesn’t disappoint. As soon as I connected the adapter to a high-speed HDMI cable (I use this one) and my iPad Pro, my TV (an LG55B7V OLED TV) started mirroring the iPad Pro’s display and enabled Dolby Vision by default.

I did two things to double-check that 4K HDR signal was being passed to my TV correctly. First, I went to Settings ⇾ Display & Brightness, tapped on the ‘LG’ option for connected displays, and confirmed that Dolby Vision was enabled. To my surprise, not only does the iPad Pro turn on Dolby Vision as the recommended option under ‘Preferred Display Settings’, but it also lets you pick standard HDR as a ‘Good’ option (in addition to SDR). 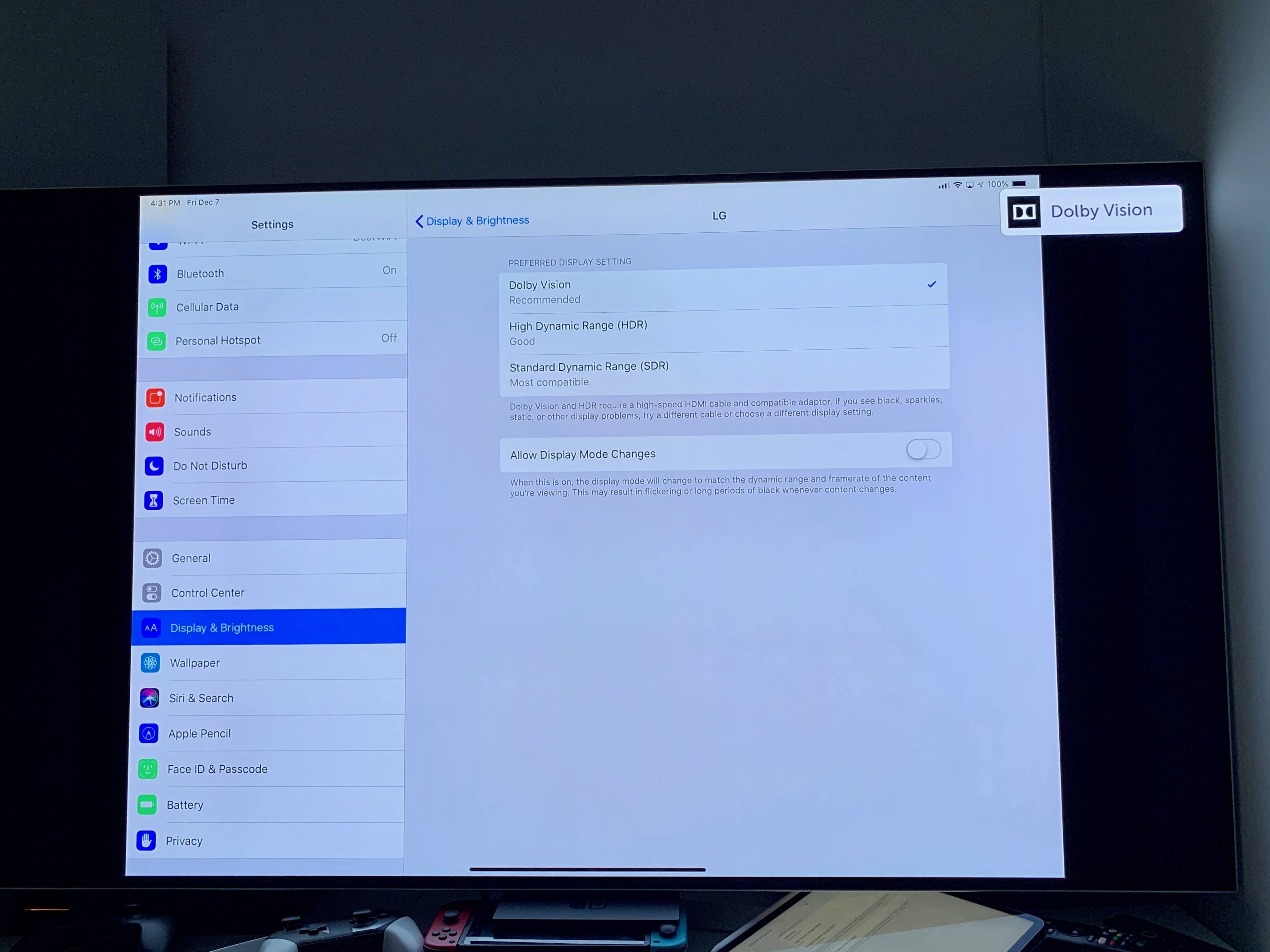 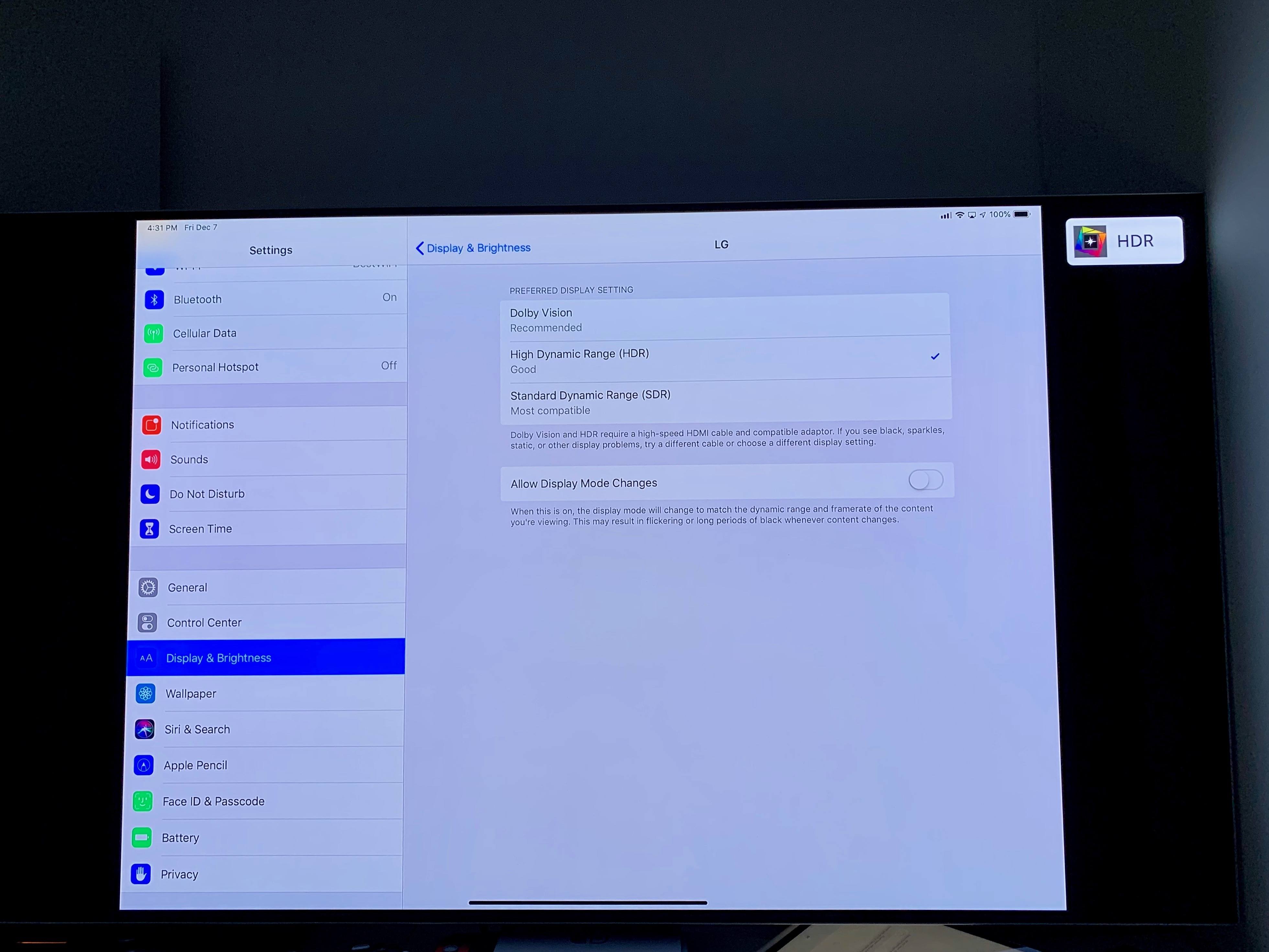 Then, using a Swift Playground script kindly donated by Steve Troughton-Smith, I checked the modes supported by UIScreen while the adapter was connected and, as I hoped, the external display showed up as 3840x2160 @ 60Hz. As you can see in the photo below, the iPad’s screen is the one running at 2048x2732 @ 120Hz thanks to its ProMotion display. 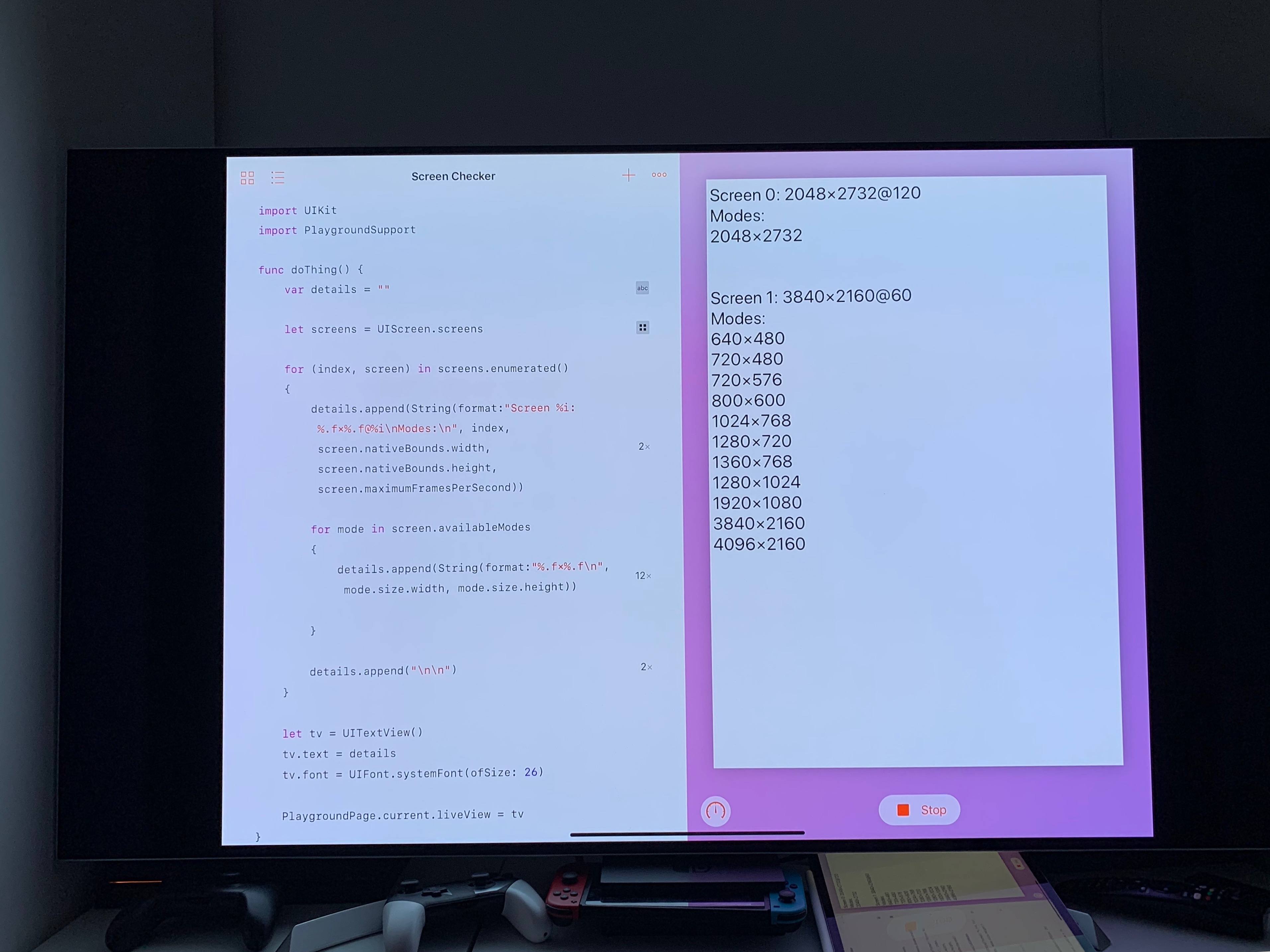 At this point, after seeing that both Dolby Vision and HDR were available in Settings, I turn on the switch to allow display mode changes, which was disabled by default. This option, as explained in Settings, changes the TV’s display mode automatically based on the dynamic range and frame rate of the content you’re viewing.

Once the the setting was on, I launched the TV app and started playing two of my recent movie purchases that support Dolby Vision and HDR – Fantastic Beasts and Where to Find Them and The Greatest Showman, respectively. Again, as I hoped, with Dolby Vision enabled as the main preference Fantastic Beasts started playing without showing any alert on the TV; The Greatest Showman (which has an HDR icon on the iTunes Store instead of Dolby Vision) caused the TV to switch to HDR automatically (showing a message in the top right corner) as I had enabled display mode changes in Settings. I didn’t have to tweak anything for this work and the movie looked great on the TV. I also tested 4K Dolby Vision content from Netflix and encountered no issues with mirroring from the iPad Pro to the TV.

While I’m happy with performance and easy software setup of this adapter, there is one major limitation, which is exacerbated by the accessory’s price tag: the lack of USB-C power passthrough, which means your iPad Pro won’t charge while mirroring video to an external monitor. While I wouldn’t have expected to get an extra USB-A port like in Apple’s AV Multiport adapter, I feel like, for 60 Euros, at least a single USB-C port for power delivery should have been added.

If lack of power passthrough is a deal-breaker for you, I recommend waiting a few extra months for new (and possibly cheaper?) adapters with 4K @ 60Hz and HDR support to become available; now that Belkin has one, hopefully new options from different companies will follow. On the other hand, if you’re not concerned about the lack of power delivery and need an adapter to play 4K content with Dolby Vision/HDR right now (particularly if you don’t already own an Apple TV 4K), and if you live in Europe, Belkin’s USB-C adapter gets the job done.