The idea of using the iPad as a tool in school is an interesting prospect. On one had the tablet form factor of the iPad allows it to be used like an open notebook - the screen is suitable for writing text and taking notes. However, Apple has nearly killed that idea without the option for a stylus, and unless you happen to love sausage or ill-reviewed Pogo Stylus, it ain’t happenin’. While we have a keyboard, what student wants to type on a virtual keyboard? My whole success to taking notes via Evernote on my laptop is because I can furiously type on my Macbook’s keyboard without ere - eyes fixated on the instructor and not on the screen. But the idea is still intriguing: how well does the iPad fair as a note taking device? For this review, I’ll be using an application called CourseNotes.

As a college student, the iPad holds promise. A lot of us are hoping this slim device will replace textbooks and their included interactive CD’s (which are usually garbage) with a cheaper, versatile, interactive learning experience. While that’s for another day (because there are a lot of negatives to digital textbooks too), I’d really like to implement it somehow, someway into my campus lifestyle as I float between classrooms. CourseNotes is the first in line to be brutally put to the test in the classroom, and I’ll say this heading into the review: it’s OK. The problem isn’t necessarily with CourseNotes, but the iPad itself - it’s just not a note taking demon like my Macbook (or hell, maybe a netbook) can be. It’s the freakin’ keyboard. *cough* Anyway, onto the review. 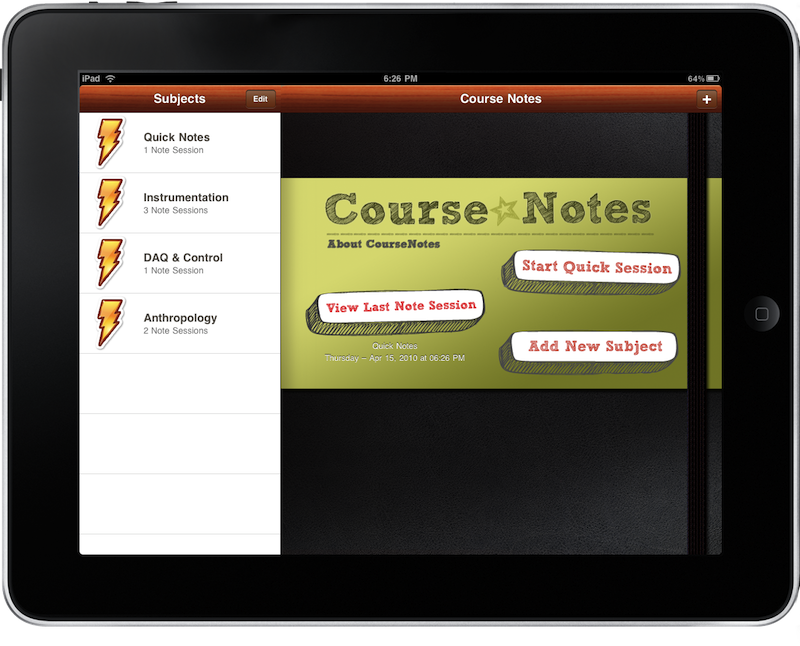 In using CourseNotes, I thought of it as a great compliment to Grades on the iPhone (even though CourseNotes is an iPad app), and similar to Evernote and even Apple’s own Notes. So immediately there’s a lot to love because you can organize notes between classes and things. This begs the question: “Is there any super-awesome-additional functionality asides from Lexicons that makes it a must have app? I mean, why not use Evernote that immediately syncs between all your devices?” Perhaps. Let’s take a look. 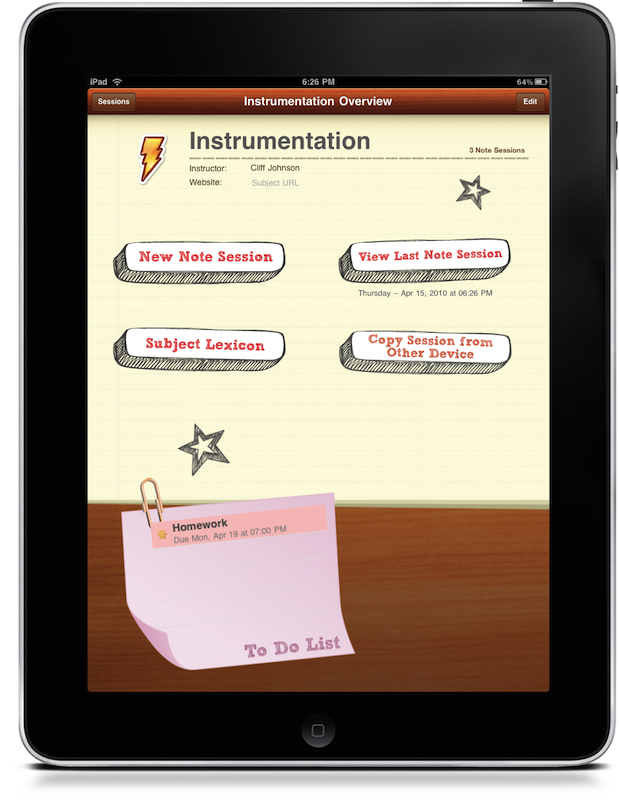 One thing I like about CourseNotes is that it is pretty overall (although I did notice a few visual muck-ups). Yellow lined paper sprawls across a wooden desk with an occasional sticky note reminding you of homework assignments to turn in. So it’s cool in that regard, but what are looks if it doesn’t function right?

Basically you can make a variety of subjects. Whether you’re being schooled on awesome things like Apple product philosophy or something as boring as anthropology (sorry culture / history buffs), CourseNotes let’s you make a subject for it. When you start the app, you can start a quick session, or delve into a subject to review notes and to-do items. 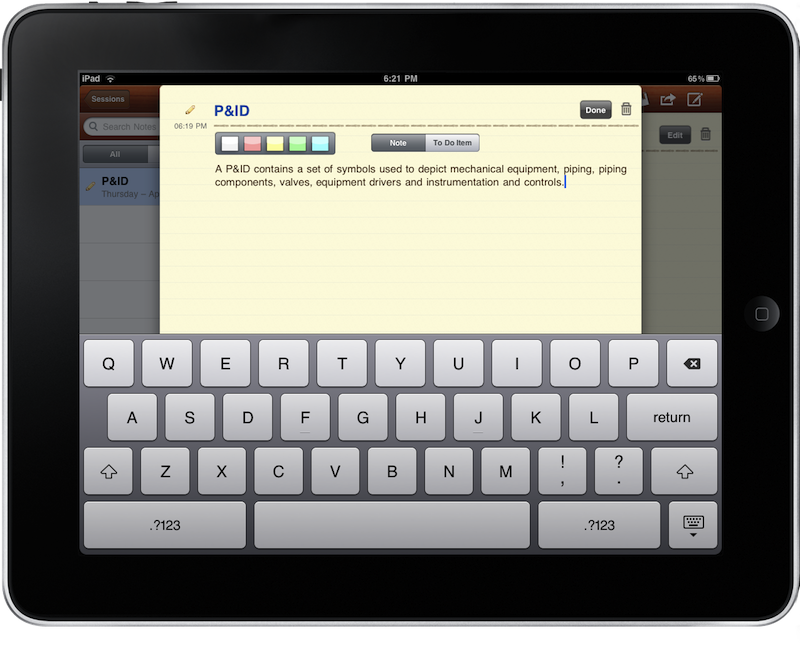 Starting a quick session will give you the option to start taking notes. You can assign your note a title, then begin typing. There’s nothing special here: you just have your basic typing interface, and the ability to change the title’s colors (if you haven’t typed a title, there’s no indication on what color you chose). While a major update is in the works for drawing and things, right now this isn’t available, and I’ll follow up with a quick update.

Again, the application works okay. But goodness, taking notes on the iPad with the virtual keyboard is like trying to do wind sprints on a sheet of ice: it’s impossible. With the virtual keyboard, I cannot keep up with the instructor - I don’t have home row advantage. Now while I’ve gotten pretty good with the keyboard in general (even without looking), without that tactile feedback, being under so much stress and trying to type quickly is hard.

Onto the cool features, you can highlight a word (a technical term if you will) and make a definition for it. If you ever have to refer to it again, you can in your Lexicon database. If you don’t know the definition, you have the option to look it up in Wikipedia. But Wikipedia is terrible for college references (I’ve never had a professor that gave me the okay to use a Wikipedia reference in any assignment - ever), and I wish there were links instead to other technical databases and encyclopedias.

Back to sessions real quick, each time you start a new session, you can create as many notes as you want for that session. For example, it’s like if I had a class (a session) at 1:30, I could make a bunch of index cards based on the different topics presented in that session. It’s neat since you have this organizational structure that’s as flexible as you want it to be.

As well as making a note, you can make a to-do item. Hey, you’ll never forget your homework again! To-do items will show up on a sticky note attached to the subject you’re perusing.

I have to say that moving around in the app is poor in portrait mode. In landscape mode it’s cool - you just hit a button to go back to sessions and subjects. In portrait mode, you have initiate the pull down list, then go back to a previous area of the app (which is annoying). In either case, I don’t think there’s a shortcut to go home (please correct me if I’m wrong - but I couldn’t find one). If you want to go back to your subjects view, you have to backtrack into your sessions.

Unable to test this feature, CourseNotes does support the ability to share notes between other users (aka classmates) via wifi or bluetooth. If this works as intended, this is a huge A+ feature: classmates could easily have not one set, but perhaps a dozen sets of notes on the same class for easy comparison. You can also email your notes if you wish.

While there are some odd UI decisions, being able to organize notes specifically for class is a welcome feature. Student will have everything available in one place, and they’ll always have custom reference lexicons available for each subject. Though there were some wonky UI decision (at least in my opinion), taking notes is okay (more the iPad’s limitation than the app’s), and I liked the fact that they were automatically dated. For those who wish to give CourseNotes the love it deserves, we’re giving away three copies to iPad toting students. Or if you just can’t wait to try this guy out (as it’s one of the only note taking solutions on the iPad right now), you can hit up the App Store and pay a minimal $4.99.

So, do you think you’ll fare well by taking notes on the iPad? Already have a plan for doing so? Students only (please), leave a comment below for your chance to win and tell us what you hope the iPad will bring to the educational field. Textbooks? Better note taking? Presentations? Share your ideas! The contest ends Sunday, April 18th.