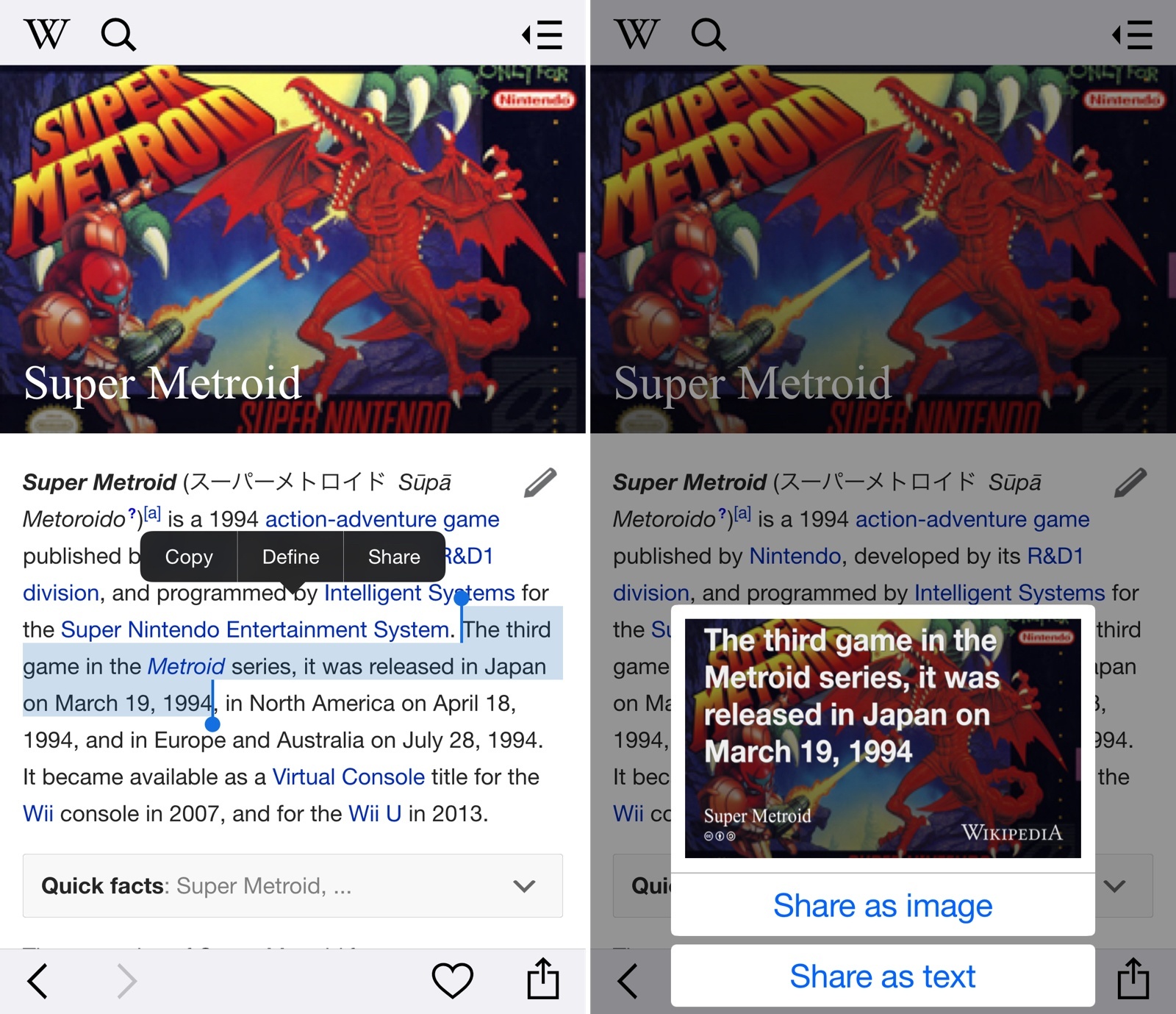 The practice of sharing ‘textshots’ – screenshots of text, as they’re often referred to – has taken off among certain tech niches for two reasons. First, turning text into a static image is a primitive but effective workaround to circumvent Twitter’s 140-character limitations. But more importantly, humans have a natural tendency for convenience and visual feedback, and these two aspects are combined in the art of well crafted textshots: they save you a click, and they make shared passages of text more visually appealing. There are several reasons as to why textshots are working well for some Twitter users, but the underlying idea is extremely simple: images can add flair to a tweet in a way that plain text can’t.

Wikipedia is hoping that this concept will also apply to their app, which, following a rollout on Android, is getting the ability to share facts as ‘cards’ on iOS today. I tried a pre-release version of the app, and, while far from Instapaper’s surprisingly advanced textshot implementation, the Wikimedia Foundation has put some nice touches in this feature.

We believe knowledge is contagious. That’s why we’ve built a feature that allows readers to easily and quickly create customized images overlaid with text from an article that can be shared with anyone via social media (Facebook, Twitter, Google+, etc.), email, or text message.

To share facts as cards, all you need to do is select some text and hit the Share button from the iOS copy & paste menu. Wikipedia will use the lead image of an entry (also new on the iOS app) as the background for a small shareable card, which will have text overlaid on top. Once you’re shown the preview, you can decide if you want to go ahead and share it as an image or stick to regular text – the app will show a standard iOS share sheet anyway, so you’ll be able to send cards and text to any installed app. If you share an image, the title and link of the associated Wikipedia entry will be appended to it as well.

I’ve shared a bunch of Wikipedia ‘fact cards’ privately with Myke, and I think they’re a nice way to visually share Wikipedia links and quotes, but I wish there were more options or, at least, some kind of control over font size. Wikipedia does a good job at dimming the background image to make text readable, but long quotes will always get cut off, as the app only generates small cards without the ability to make text smaller. Similarly, I wish Wikipedia would be smart enough to automatically remove additional information such as ‘(Listen)’ buttons from cards, which, unfortunately, get included as text in the final image.

All this makes Wikipedia’s cards more suited for bite-size quotes and facts, which makes sense from a mobile standpoint, but that also precludes the app from generating detailed and informative textshots like Instapaper or Medium can. I like the idea of sharing Wikipedia facts as cards that carry a relevant background image, but it’d be nice to have the ability to share longer passages of text, too.

Wikipedia is the latest service to adopt textshots, and they’re hoping that quick facts shared as cards will make for more engaging snippets of information. The latest version of Wikipedia Mobile with visual fact sharing will be available on the App Store later today.