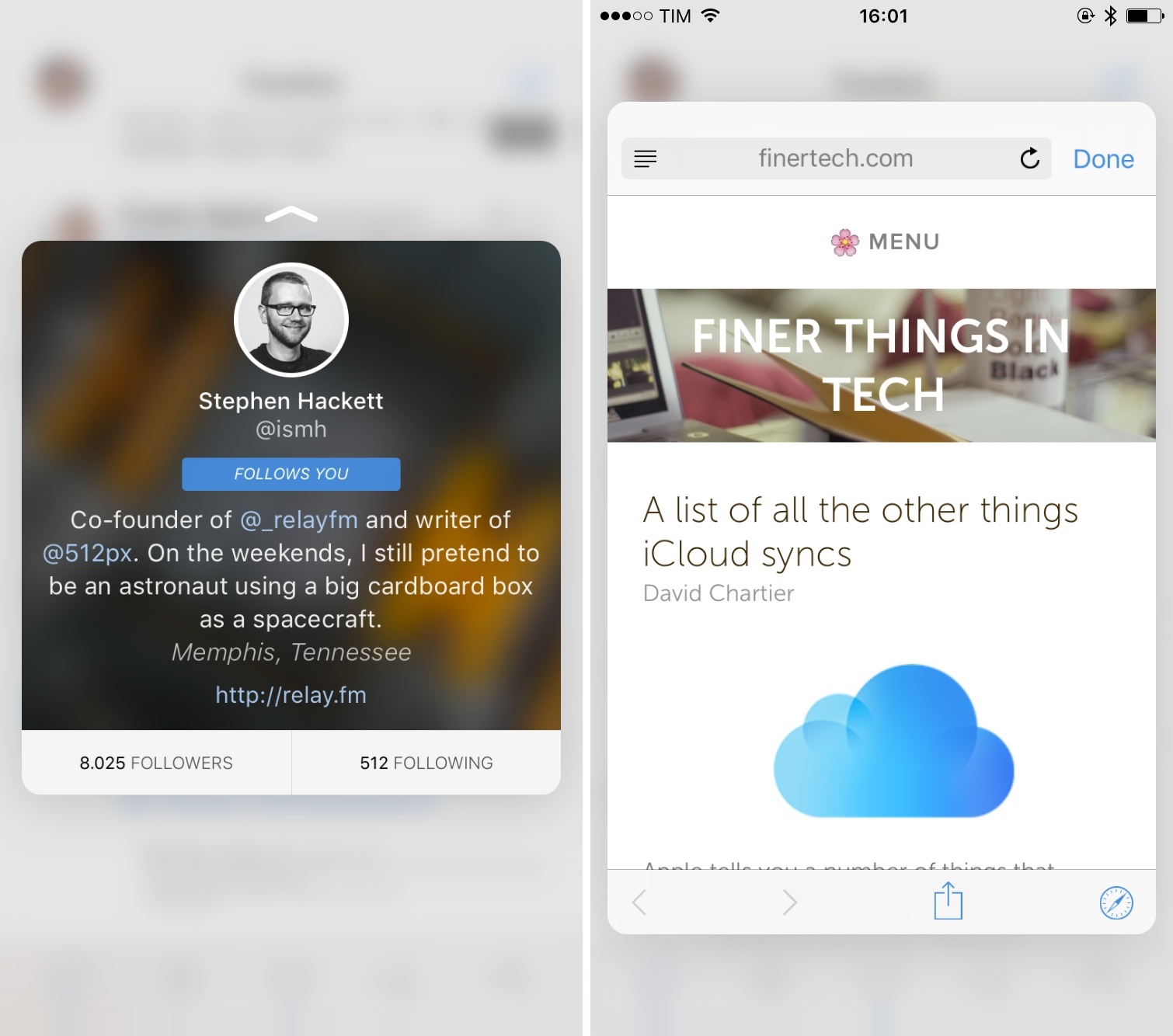 Released earlier this month, Tweetbot 4 marked an important comeback for Tapbots. After years of stagnation, the iPad app received a fantastic update with a new design and column view, while the iPhone app continued refining the foundation of Tweetbot 3 with power user features and various visual tweaks.

Among changes, however, Tweetbot 4 didn’t launch with 3D Touch integration on the iPhone 6s – a choice motivated by developed Paul Haddad with an understandable desire to test the new input method on an actual device first. Today, Tapbots has released Tweetbot 4.0.1, which brings support for 3D Touch in the form of Home screen shortcuts and peek & pop gestures inside the app.

I wouldn’t normally cover every single app which received 3D Touch support over the past few weeks, but my usage of Tweetbot 4 is high and frequent enough to warrant a standalone mention. Also, I believe the implementation in the app’s timeline considerably changes the experience of browsing and previewing tweets. 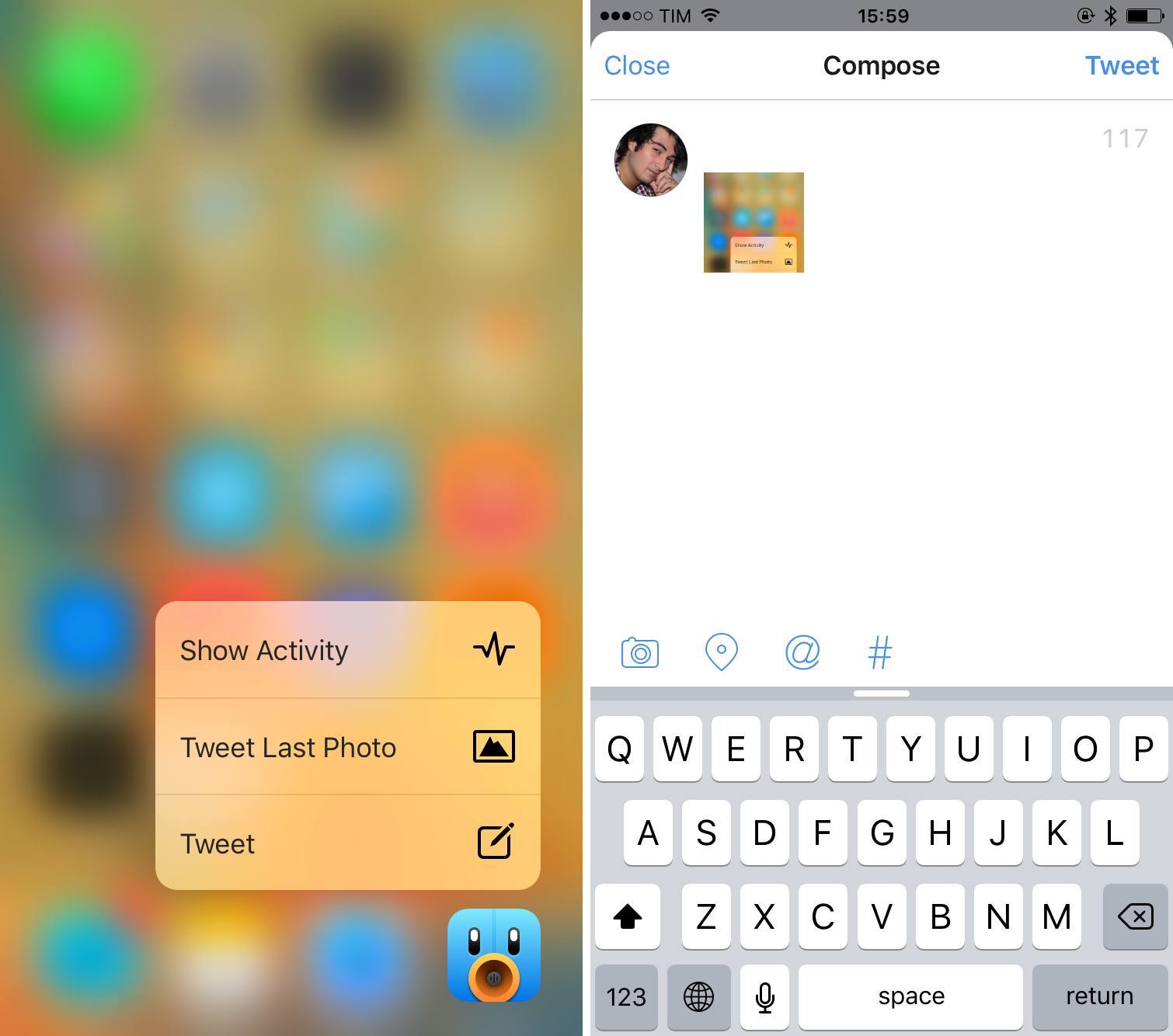 On the Home screen, Tweetbot shows three shortcuts upon pressing firmly on its icon: Show Activity, Tweet Last Photo, and Tweet. The ability to quickly tweet the last photo taken has been particularly handy in my tests. I often take a screenshot on my iPhone that I want to share on Twitter; with 3D Touch and this shortcut, Tweetbot opens in the Compose screen, populating its attachment field with the last item from your photo library. It’s an ingenious addition to the 3D Touch menu, and one that shows how hidden app features can be exposed to users in a fresh and consistent way.

Alas, Tweetbot currently doesn’t let you customize the menu like Launch Center Pro or PCalc can – if you were hoping to have easy access to Direct Messages or a list in here, you’re out of luck this time. I hope that Tapbots will consider allowing users to define their own 3D Touch options for the Home screen (it seems like many developers are opting for this route).

Where 3D Touch in Tweetbot is most impressive, I think, is in the peek & pop gestures. In any timeline in the app (read: not in a tweet detail view, direct message, or profile view), you’ll be able to press once to peek at a tweet, webpage, or user profile, then press harder to pop it open and navigate to a detail view, full profile, or webpage with Safari View Controller. These gestures are accompanied by the same visual effects and haptic feedback used elsewhere in iOS 9; you can also swipe up when peeking at content to reveal an action menu with contextual options for tweets (fave, retweet, quote, or reply) and users (reply, manage list memberships, or mute). 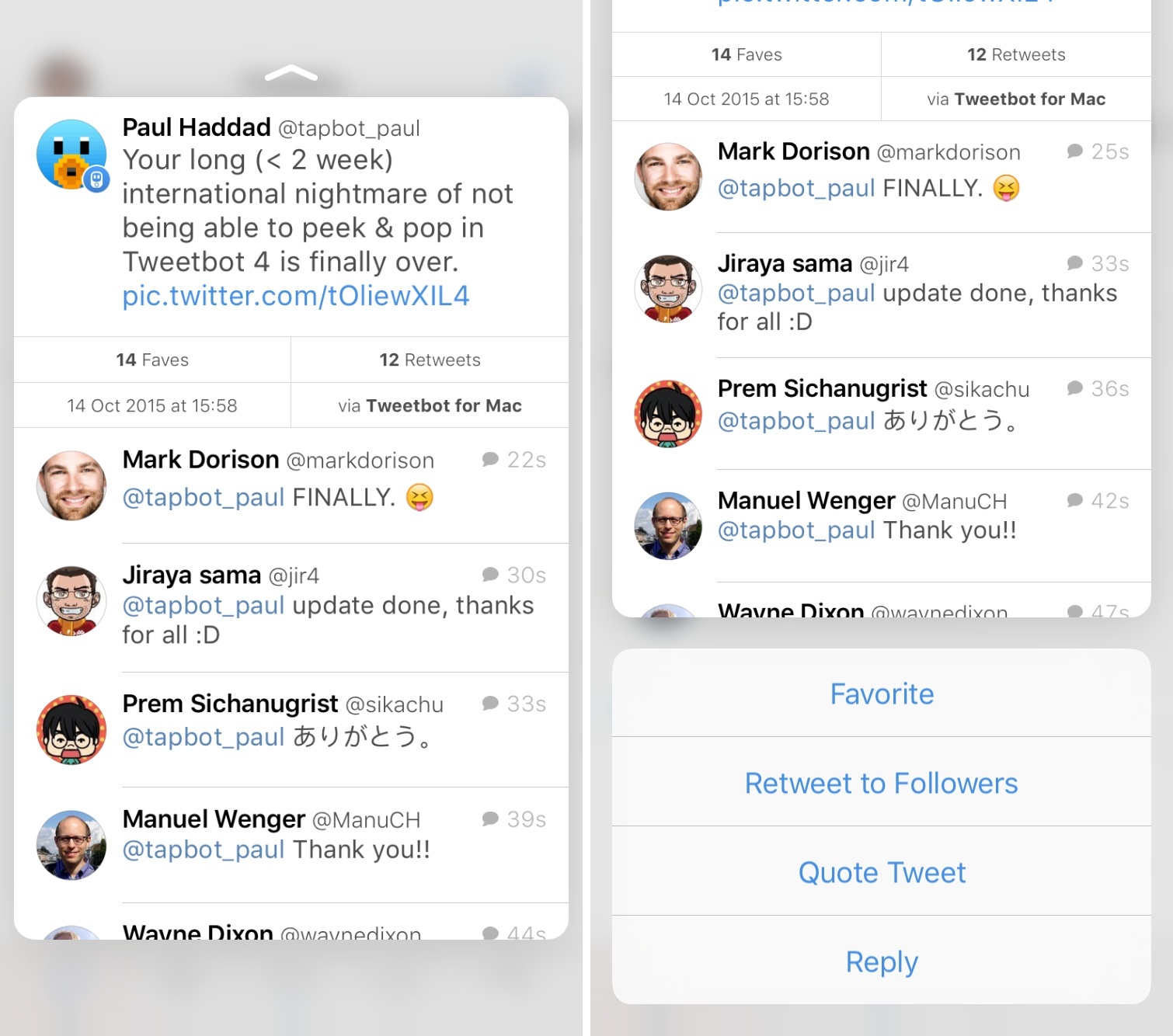 Since getting a version of Tweetbot with 3D Touch support last week, I’ve started readjusting the way I interact with my timeline on a daily basis. When I scroll my Twitter feed, I don’t need to look at every tweet in detail. Over the years (and by following quite a few people), I’ve developed a way to quickly assess a tweet’s relevance to my interests. A good part of my Twitter experience is previewing content – whether it’s a tweet, an article, or a user profile – before deciding what to do with it: should I read this now or save it for later? Is this tweet worth a favorite? What about this picture?

3D Touch facilitates this behavior as quickly previewing tweets and links is easier than ever. If I want to see how many faves, retweets, or replies a tweet has received I no longer have to swipe on it and then swipe back – I can just press, peek, and let go to return to my timeline. Tweets are previewed in a smaller card with the same design of a standalone detail view (which is what you get if you “pop” and choose to fully expand a tweet, entering a nested view).

As per Tapbots’ tradition, the implementation is extremely well done and fast: when peeking, the original tweet and replies load above and below the tweet you 3D-touched, which lets you peek at entire conversations with just a press of your finger on the timeline. You can also peek at Vines, Twitter videos, and Instagram videos, which will start playing in the preview card without having to press harder to pop them. You can peek at embedded tweets, hashtags, and profiles – which will show a small card with essential user information such as bio and followers counts. 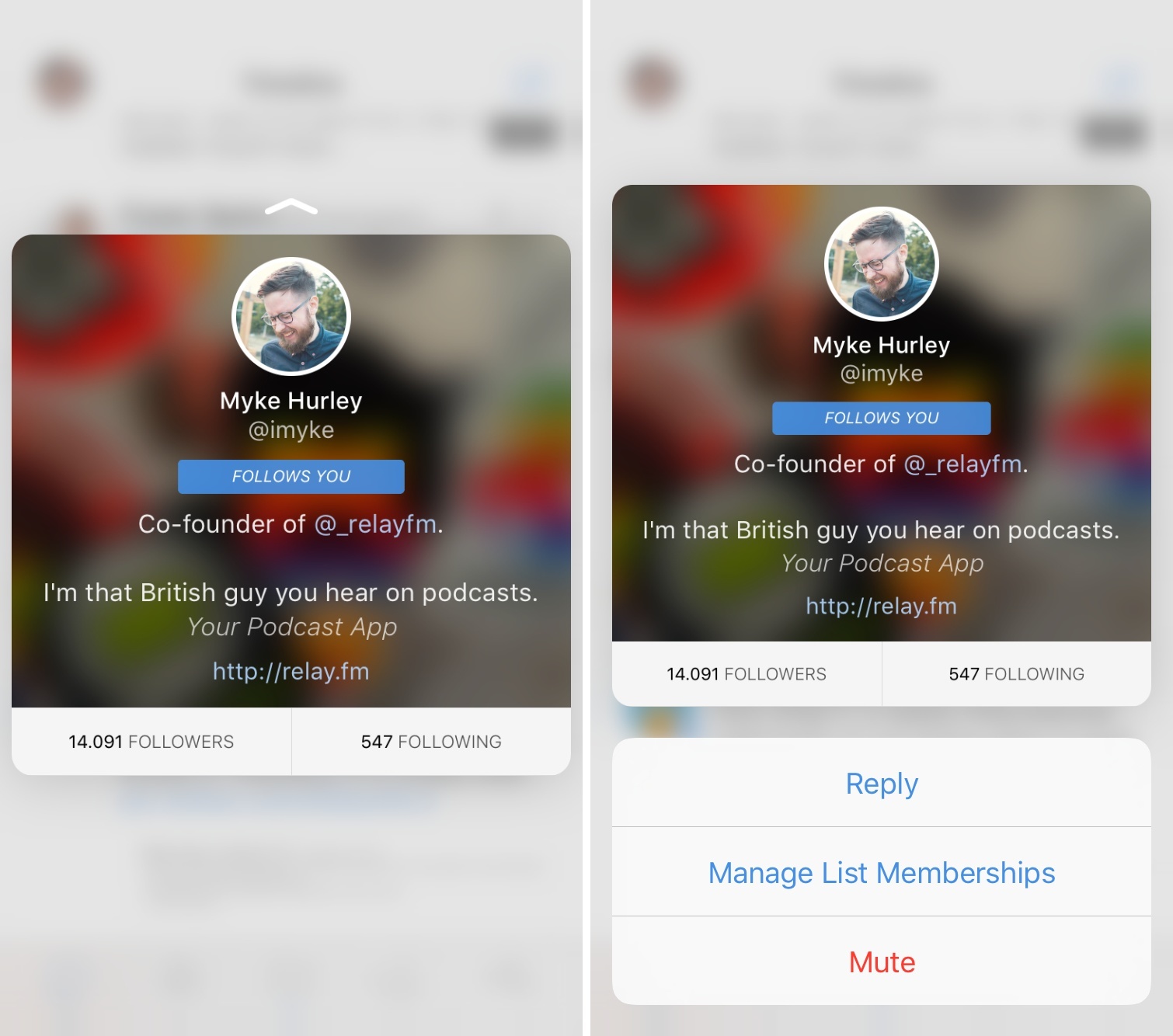 These new interactions don’t just make for a good demo of 3D Touch – when applied to the Twitter timeline, they fundamentally alter the experience of previewing tweets and media. The nimble flow of peek and pop plays well with the ephemeral and short-form nature of Twitter – it’s a perfect match, and Tapbots is taking advantage of it quite cleverly.

That’s not to say Tapbots can’t do better in future iterations of 3D Touch in Tweetbot. When peeking at a tweet that contains a picture/video, the thumbnail preview isn’t shown in the floating card – a design choice that I don’t fully understand as it’d be useful to see the full tweet alongside fave and RT counts when peeking.

Because it’s limited to timeline views, I’ve often been confused by the inability of 3D-touching in the DM screen and tweet detail views, which was registered as a long tap that brought up the share sheet. Speaking of which, it can be occasionally difficult to not trigger the share sheet instead of the peek preview (and vice versa), but I don’t know if this is simply something I’ll get used to with time. In general, I’d like to see more consistency with the availability of 3D Touch in the app.

I didn’t think 3D Touch would turn out to be a big deal for Tweetbot, but in my usage it has become a key aspect of interacting with the app and saving time when looking at tweets, users, and webpages. Tapbots has done a good job at understanding how 3D Touch could be useful in the app, and I’m looking forward to more customization and consistency in the future.

Tweetbot 4.0.1 with 3D Touch support is available on the App Store.