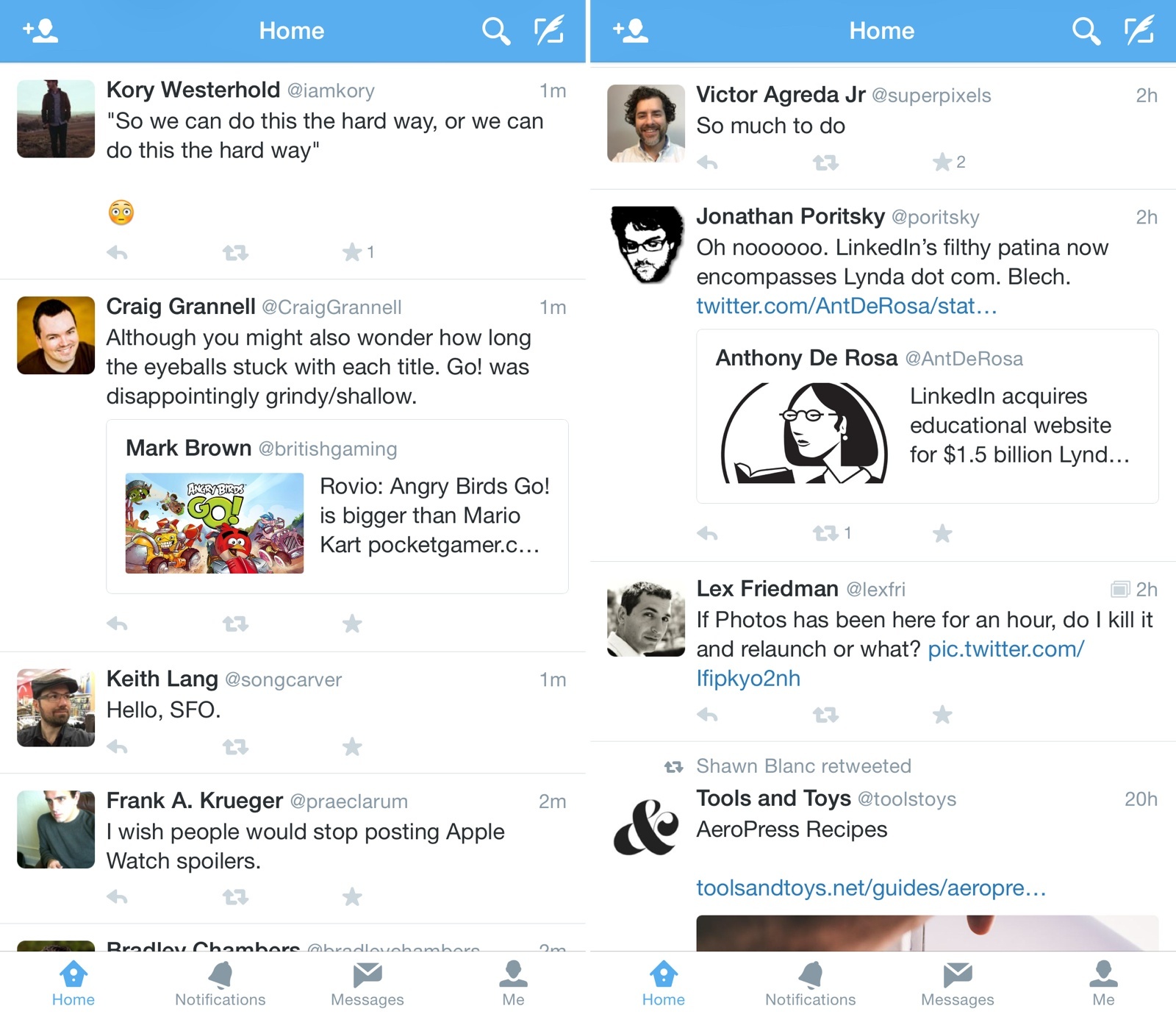 Twitter has been releasing a string of minor but interesting changes lately, a symptom of the fact that the company seems to have found its product-shipping groove again.

First came the new Quote Tweet feature, which is supplanting the old plain text-based quoting system with a new, visual inline tweet style. The new feature is still rolling out (I don’t have it for my account yet) and is the final version of a test the company rolled out to a limited number of users months ago and then temporarily suspended. Essentially, quoting a tweet (tap the Retweet button on iPhone, then choose Quote) brings up a compose view with a small “tweet card” at the bottom, allowing you to add a comment on top. In the timeline, quoted tweets will appear as a comment with the original tweet embedded below.

I was a fan of the embedded visualization for Twitter.com links when it shipped as an A/B test, but I find today’s solution superior in every way. Notably, embedding quoted tweets as snippets brings handy savings in character counts and provides a richer visual experience that retains the style of the original tweet. You can see the full name of the quoted user alongside inline pictures, you can easily tap the tweet, and you don’t have to deal with choosing a quote style or, worse, tweaking characters (such as quotes) manually. In line with Twitter’s increasing reliance on visual cards for previews in lieu of URLs and text, it makes sense for quoted tweets to be presented as “attachments” instead of plain text and links.

Even better, the system appears to be compatible with third-party apps through the API, and inline tweet previews also apply to Twitter.com links pasted in a new tweet, not just status updates issued from the Quote Tweet button. This results in tweets being treated more as visual entities than URLs, which, again, is consistent with the way other pieces of content have been presented by Twitter for the past year.

Yesterday, Twitter rolled out two other changes to its iPhone app: the ability to upload slo-mo videos and the removal of the Discover and Activity tabs from the main timeline.

The latter is a curious change, motivated by Twitter as the result of updated Trends and as an effort to embed discovery features directly in the timeline without the need to browse separate views.

As part of this change, we’re moving trends to the search page and retiring #discover and activity for all iOS and Android users. We’ve been working to make content easier to find over the last several months in places like your home timeline – with recaps and Tweets from within your network – and through efforts like MagicRecs. We’ll continue to make improvements like these in the future.

This return to form with a simplified interface is not surprising – Twitter wants you to remain “engaged” with the main timeline, so rather than tucking away discovery features into sub-views, they’re opting to offer a single place – the timeline, or, at this point, “timeline” – that constantly pushes content (in chronological order or not) to you.

As I wrote last year:

The Twitter timeline was built to be a reflection of a Following list people could build meticulously over time. But as it approches its ninth anniversary, Twitter has realized that curating a list of accounts isn’t most people’s forte, and they want to make sure that the timeline stays interesting even without investing time into finding accounts to follow. And that meant breaking the original concept of the timeline to include content and account suggestions. It meant to make the Twitter timeline a little more like Facebook.

I’d argue that most people also didn’t bother swiping between views in the main timeline, thus the move towards more integrations, with Trends being folded into search.

It’ll be interesting to see where Twitter will take their timeline next. In the meantime, I’ll keep waiting for share sheets and an update to their iPad app.