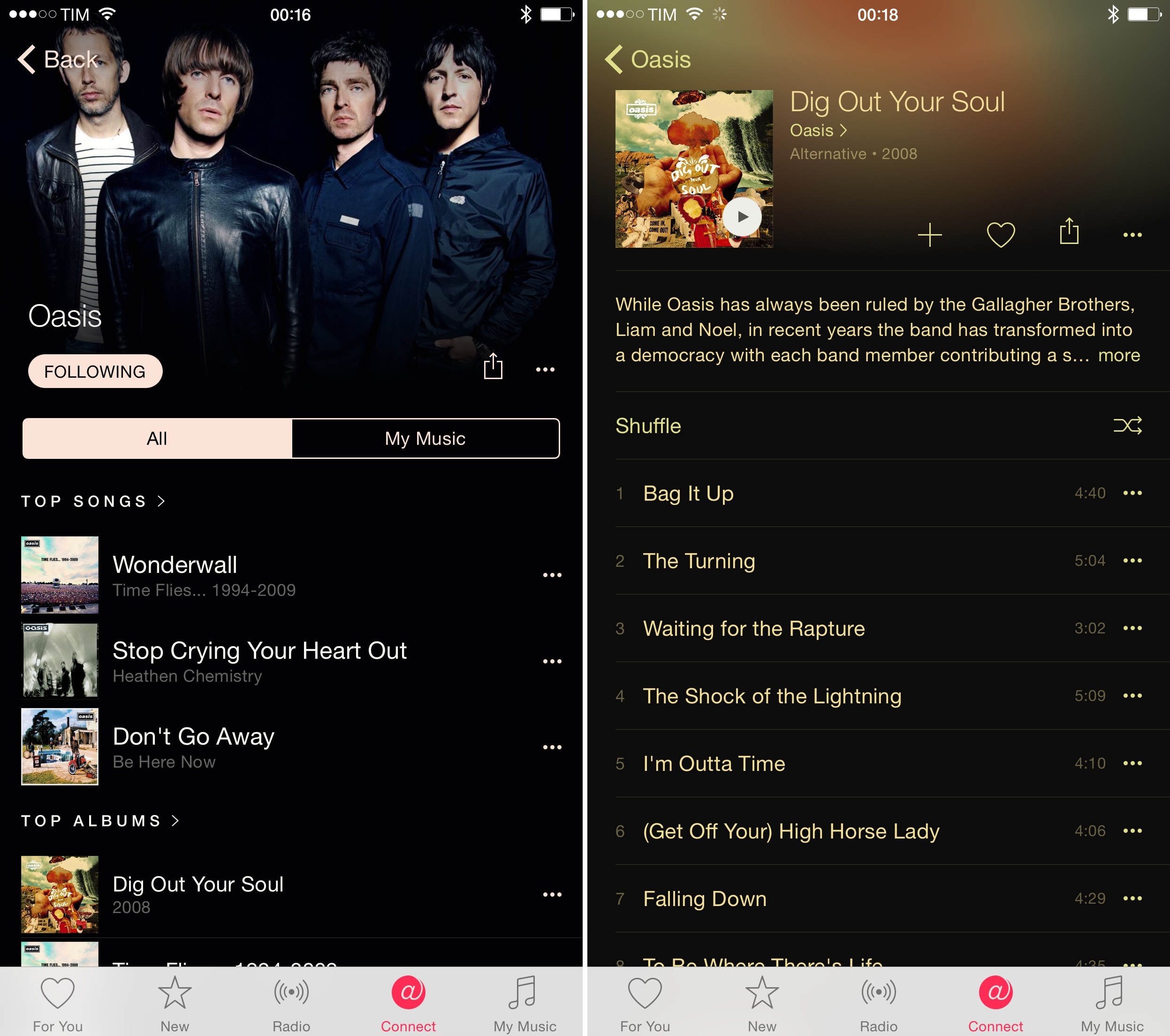 Like many others today, I started the three-month free trial of Apple Music. I’m curious to check out Apple’s streaming service combined with curation, Beats 1, and Connect features, and I’ve been eagerly anticipating this product for quite some time. I’ve been listening to music via streaming services since I found a way to start using Spotify in 2009, so when a big player like Apple enters this market, I pay attention.1

As a strong believer in what Beats Music wanted to accomplish, I was particularly interested in Apple’s decision to offer a migration tool to existing Beats Music customers. I used Beats Music as my only music service for several months last year, which means that I had a solid collection of my all-time favorite music (I then switched back to Spotify for the superior iPad app and family subscription). Therefore, in spite of my wish to keep testing iOS 9 on my iPhone, the temptation to check out the Beats Music > Apple Music migration prevailed. Last week, I re-subscribed to Beats Music, downgraded to iOS 8.3, made sure that my library in Beats was up to date, and started waiting for Apple Music, Majora’s Mask style.

I was on a train earlier today, and I upgraded my iPhone to iOS 8.4 by connecting to my iPad over Personal Hotspot.2 Once the installation was complete, I opened the App Store, downloaded a Beats Music update that contained the migration tool, and I was set. I launched Beats Music and I was prompted to move my subscription to Apple Music.3 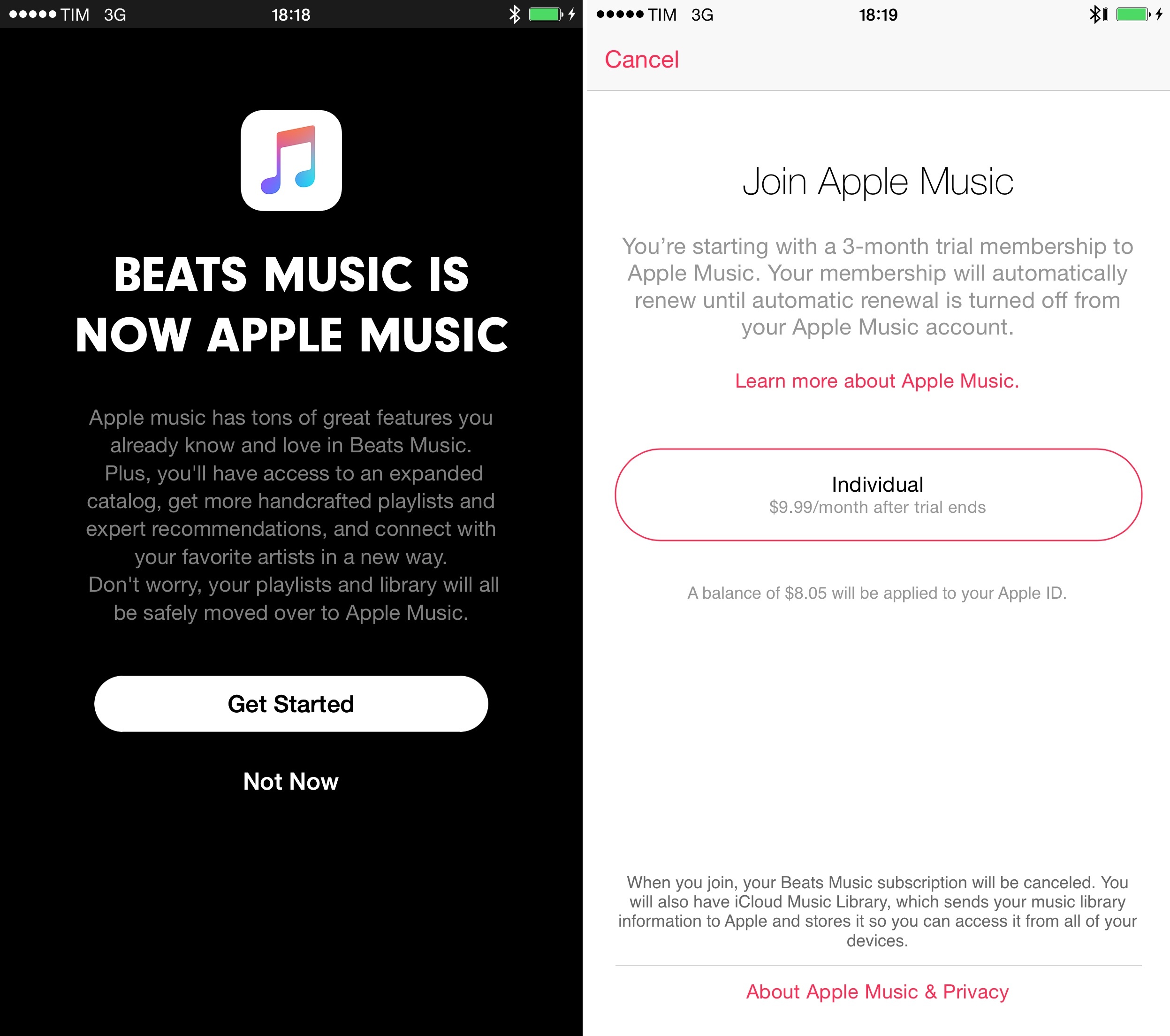 The migration screen took me to the Music app into a signup flow that explained I was about to sign up for an Individual subscription that would offer a three-month free trial and apply a balance of $8.05 to my Apple ID. The balance was applied to my iTunes Store account and my Beats Music subscription canceled. iOS 8.4 also tried to activate iCloud Music Library, which failed at first. I needed to go into Settings > Music and activate it again to make it work.

With iCloud Music Library activated and my Beats Music account transferred to Apple Music, I ended up with all my existing iTunes Match albums and Beats Music library, playlists, and follows consolidated into the new Music app. Apple Music has imported old Beats Music curated playlists such as Best of Britpop and associated them to new editors called “Apple Music Alternative” or “Apple Music Indie” for Indie Songs About Youth. These are Beats Music playlists I had subscribed to last year; now, they coexist alongside my iCloud playlists in iOS 8.4’s Music app (into My Music).

When I was taken to the new Music app, iOS didn’t show me the new “bubble interface” to pick my favorite genres and artists. That interface was already present in the signup flow of Beats Music, which is why I could immediately browse personal recommendations in the For You section of the app today. Right off the bat, these included some top notch picks such as Death Cab for Cutie’s Plans, Bon Iver, and Intro to The Killers. I was used to these curated playlists based on my tastes in Beats Music, and I’m glad they’re available in Apple Music with a prettier interface.

As I mentioned above, Beats Music also imported artists from my library and follows. The latter has ensured I can already see content in the Connect section of the app, and, upon closer inspection, it turns out that Apple Music is set to automatically follow artists when you add their songs to your music library. You can turn this off if you don’t want to. 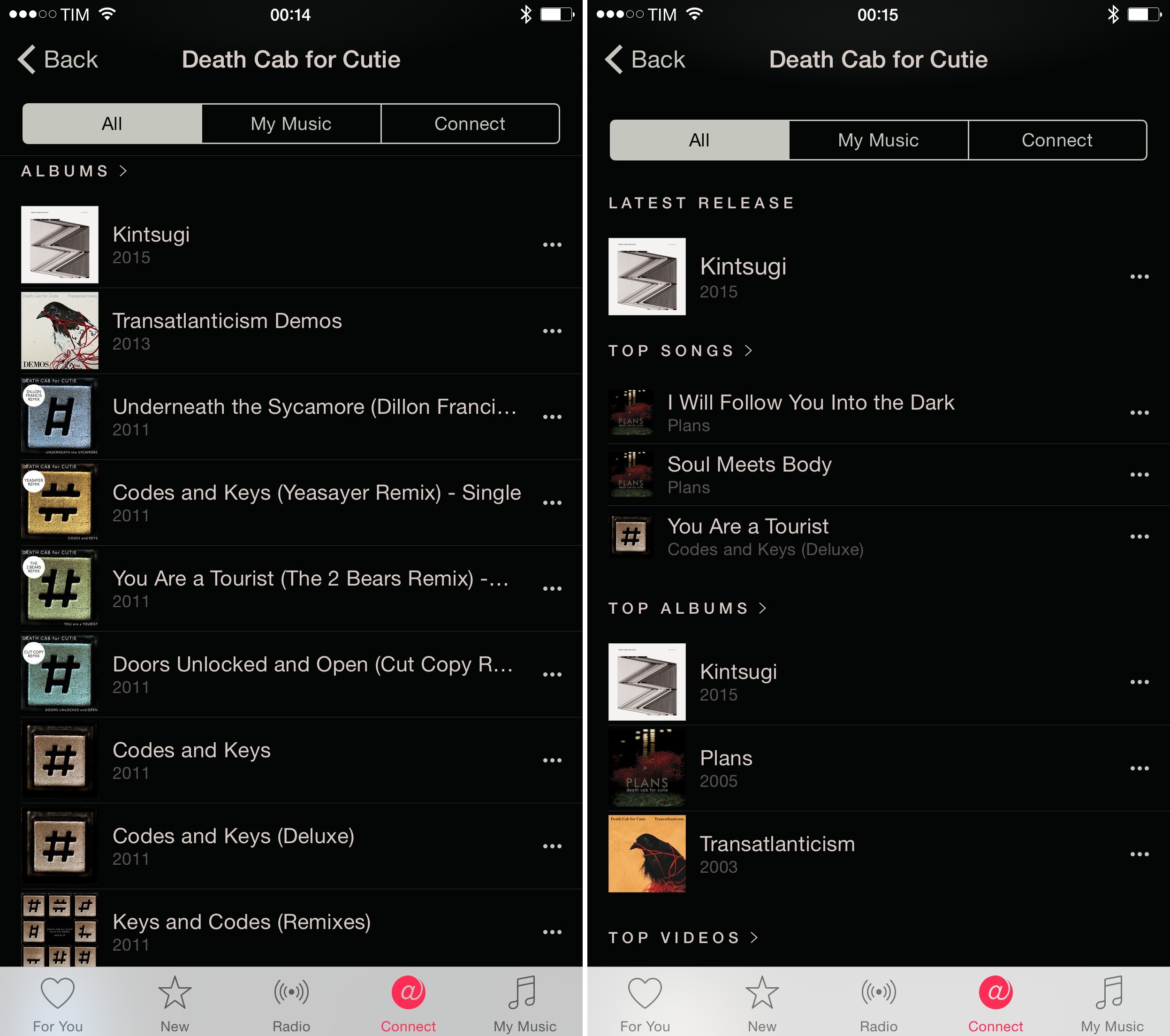 That’s too many albums, Ben.

There is one feature that I miss from Beats Music and that I hope will make a comeback. In the old app, artist pages were organized in Albums, Singles, and even EPs and Compilations. You could also view remixes and remastered editions for an album. Beats Music was smart in figuring out release types, but I don’t see this option in Apple Music, which defaults to grouping every release under Albums. That smart organization was a highlight of Beats Music, and I hope that Apple is considering it for the future.4

Another problem that I quickly noticed is the lack of a “go to artist” shortcut. This is one of the things Spotify gets right: whenever you’re listening to a song – whether it comes from your library or a station – you can always bring up a contextual menu that lets you jump to the artist without having to navigate manually. 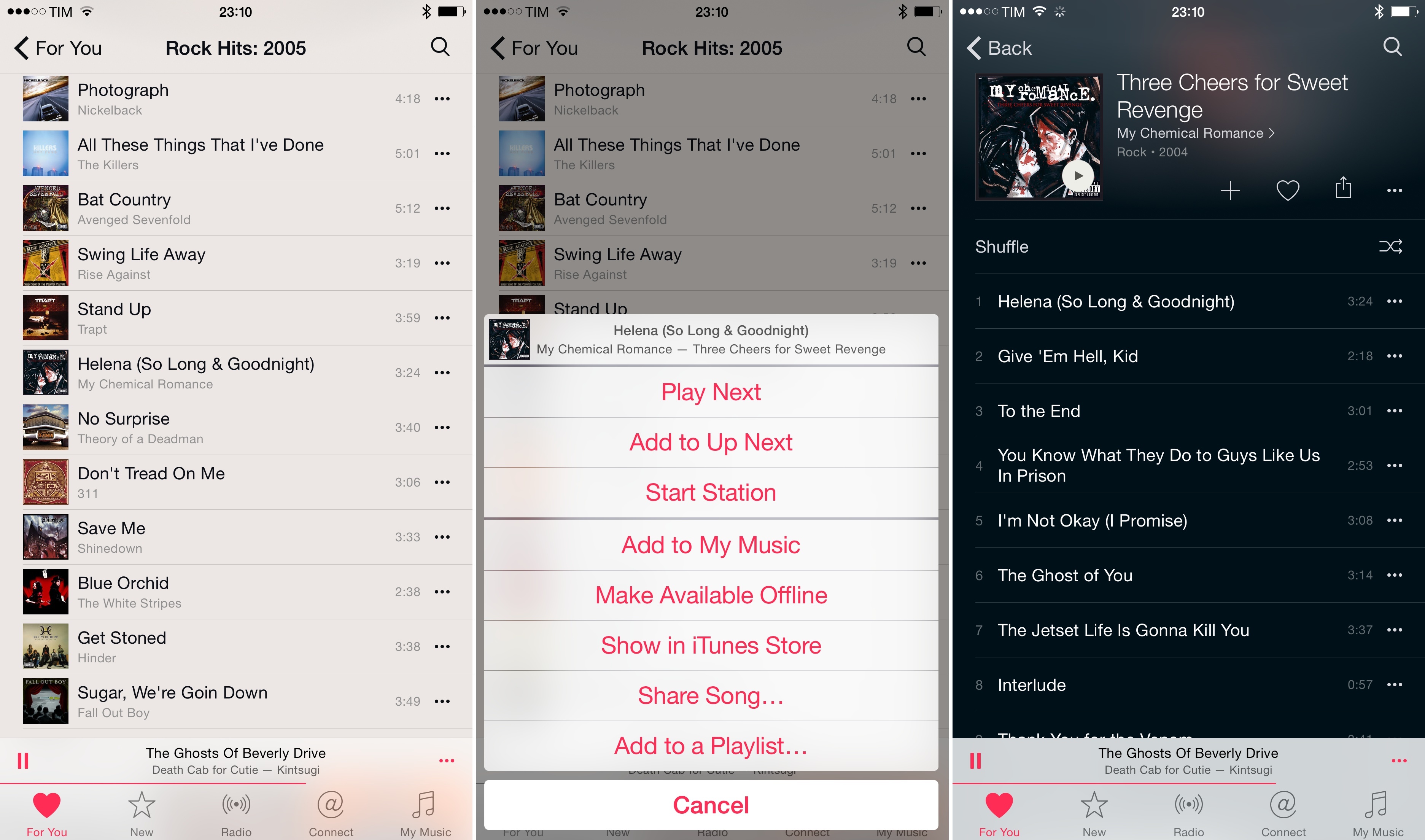 Apple Music lacks this shortcut, but you can achieve something similar by tapping the More button on a song (the three dots on the right), tap the song name at the top of the sheet to go to the song, then tap the artist to open the artist page.

Overall, I’m impressed by the migration process from Beats Music and, after a few hours, Apple Music looks like the type of music service I’ll want to keep using. It seems like Apple took everything that was great about Beats Music and made it bigger, faster, and more human.

But a few hours aren’t enough for proper “reviews”, whether they aim to highlight groundbreaking features or “confusing” aspects of a new product. I’ll have plenty more to write in the coming weeks.