Days away from Apple’s big September event, and likely just a week or two from iOS 13’s public release, this is often a quiet time for app releases. Generally that’s true for the summer as a whole, with developers heads-down working on big fall updates, but it’s especially the case the closer we get to Apple’s iPhone event. Today, however Bear has released the type of wide-ranging update that’s rare to see pre-OS launches. Bear 1.7 introduces a variety of big and small changes that improve many facets of the note-taking app. The update enables locking individual notes, or locking access to the app altogether, it brings two new themes and 33 new tagcons, there’s now emoji auto-complete, live note links, Apple Watch improvements, and more. 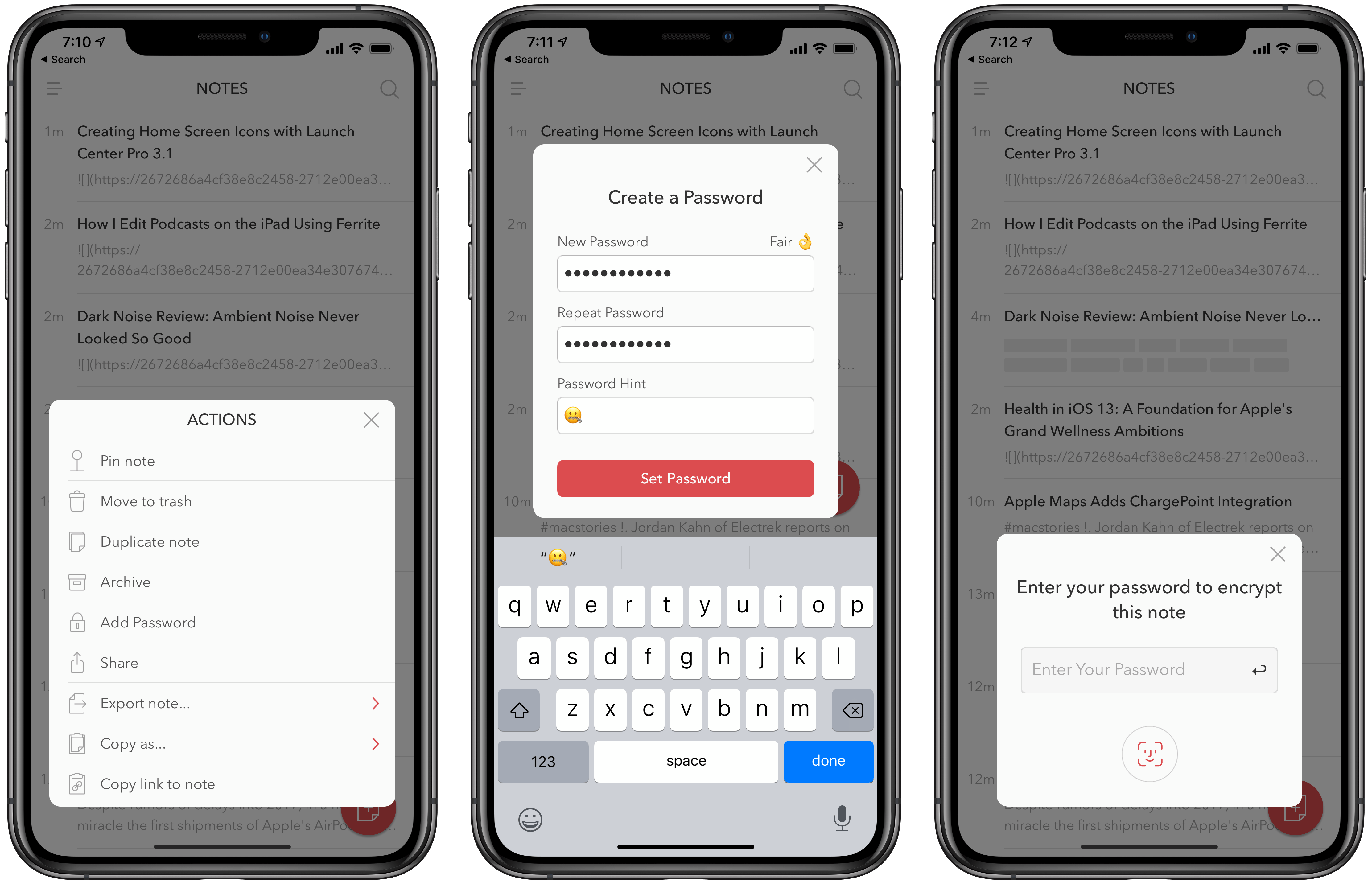 The process of locking your first note.

Bear’s newest version includes two security features, one that locks individual notes and another that locks access to the full app. The latter is pretty straightforward: from Bear’s settings, you can choose to lock the app with either Face ID or Touch ID, and if you do this you’ll need to authenticate every time Bear is launched.

With individual notes, Bear’s locking feature works nearly identically to what’s found in Apple Notes. From Bear’s Actions menu, which you can access by swiping left on a note and tapping ‘More’ or by dragging and dropping one or more notes on the app’s Drop Bar, there’s a new Add Password option in version 1.7. The first time you do this, you’ll need to set a password, with an optional hint, that will be needed occasionally in the future. I say occasionally because after setting the password you’ll be presented the opportunity to activate Face ID or Touch ID authentication, which mitigates the need for using your password as often. Like in Apple Notes, your password is required only under certain conditions, such as after a device reboot. Also like Apple’s app, once you set a password for one note, that same password will be used for all future locked notes, and unlocking one note grants access to all of them. One area where Bear differs from Apple Notes is that from the app’s settings you can set how long it takes for notes to auto-lock – the default is 2 minutes, but it can be as short as immediately, or as long as an hour later.

Among note-taking apps, Bear has long been the king of themes, and its theme advantage grows stronger in this release thanks to two new options, Gandalf and Ayu Mirage.

Gandalf is a new light theme of muted blue, purple, and grey shades. I’ve found its muted tones particularly easy on the eyes. Ayu Mirage is a dark theme which serves as a companion to the light Ayu theme that was already available; its dark blue/gray background with gold accent text is another nice addition.

Emoji auto-complete. New to Bear, you can now type a colon followed by some text to see options for adding emoji. These suggestions mimic the behavior found in Slack and make emoji easier to use in your notes if you’d rather not use the emoji keyboard.

Live note links. Bear has long offered the ability to embed note links inside of other notes by putting a note’s title in double brackets, but the one scenario where this feature broke was when you changed a note’s title but didn’t update that title anywhere else. Version 1.7 fixes this problem, making note links ‘live,’ meaning they’ll update automatically when a note’s title is changed.

Apple Watch improvements. Bear now lets you sync up to 15 notes to its Watch app, more than the previous limitation, and there’s a new FlickType keyboard for more easily jotting down quick notes on the Watch.

New TagCons. One of Bear’s charming smaller features is tagcons: icons that accompany certain tags in your list rather than the standard hashtag. The existing set of tagcons gains 33 new entries in today’s update.

Spotlight support on Mac. The previously available Search integration for Bear on iOS has been improved to provide quicker results, but more significantly, Spotlight support is now built in for the first time to Bear’s Mac app.

Bear fans have a lot to enjoy in today’s latest update. The set of big and small improvements makes the app better across a variety of platforms and use cases, which is especially impressive considering how quiet app releases are at this time of year. With iOS 13 right around the corner, Bear 1.7 is a solid release that, while it can’t yet adopt any new OS features, makes the note-taking client meaningfully better nonetheless.

Bear 1.7 is available on the App Store.