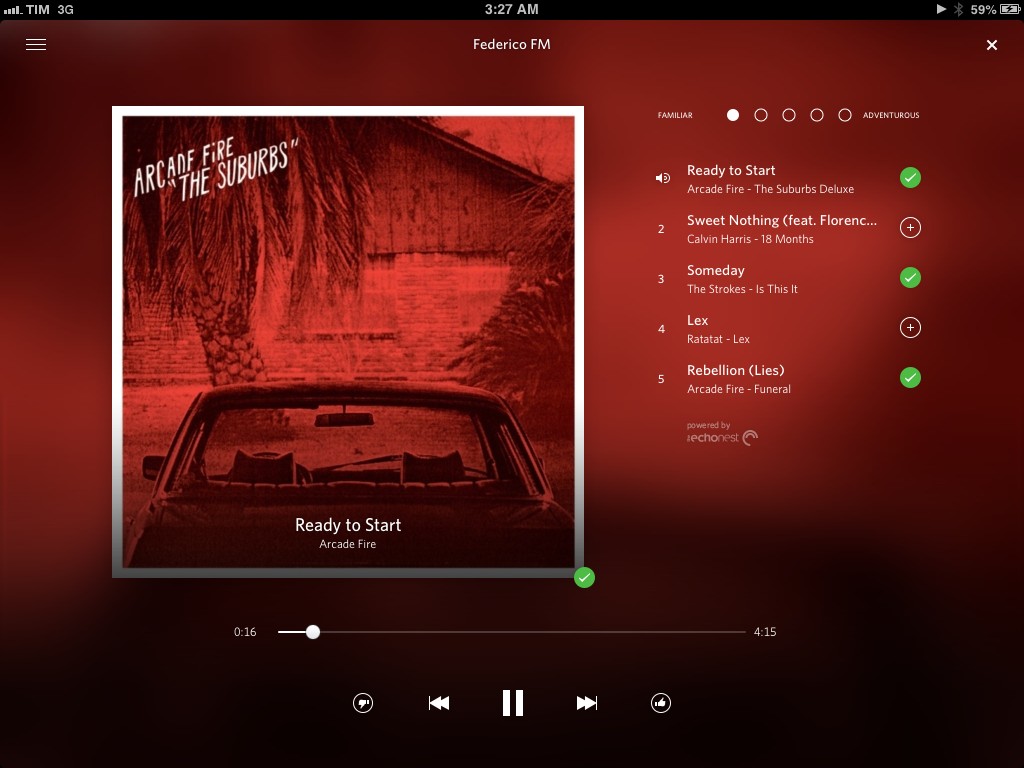 Following the introduction of improved, personalized radio stations in early August, Rdio has today rolled out an update to its iOS app that brings a wider range of controls for stations and Collection views to iPhones and iPads.

In stations, it’s now possible to alter the selection of tracks that the service will automatically pick choosing between “Familiar” and “Adventurous” settings with three additional levels of fine-tuning in the middle. Like Rdio for desktop computers, these settings are displayed as dots in the radio playing view.

Other additions in this update are more subtle, but still noteworthy. In search results, filters allow you to easily view results for artists, albums, songs, playlists, people, or labels – a handy change to simplify the process of finding exactly what you’re looking for. In the Collection view on the iPad, you can browse with a new (and admittedly visually more appealing) album view, and both the iPhone and iPad apps get the ability to sort Collection by Recently Added – useful to get a quick overview of the artists, albums, or songs you’ve been adding to your account lately.1 In the Stations area, Rdio for iOS can now start artist-only stations, just like the Mac app. 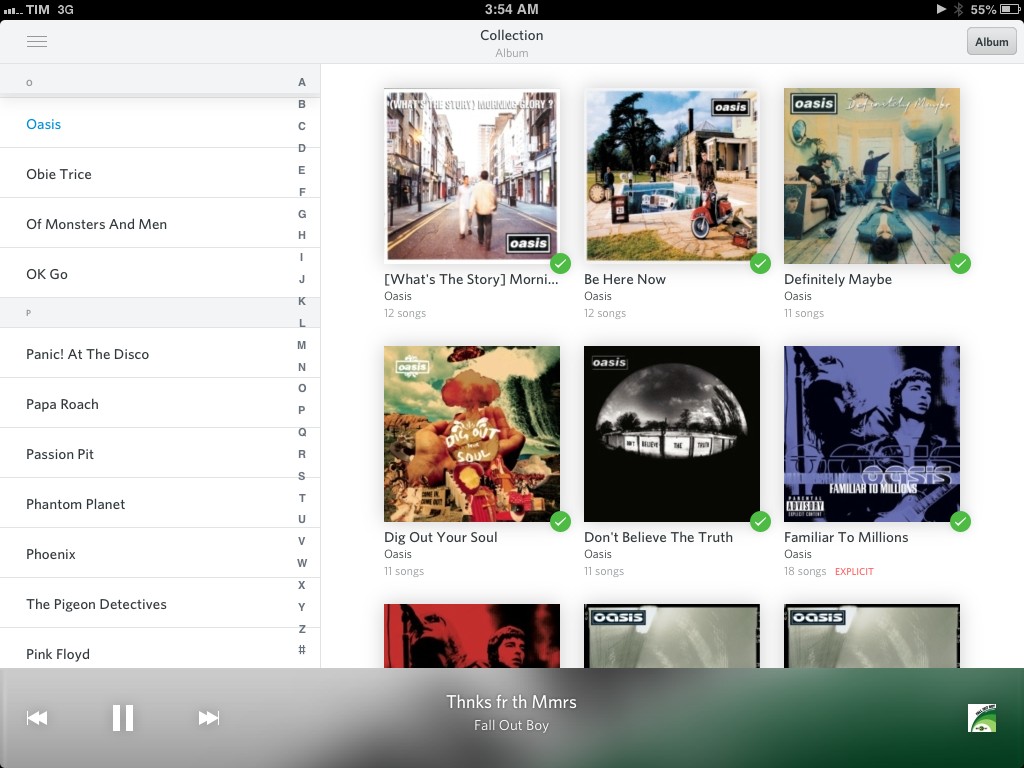 I’m a big fan of Rdio’s recent work on UI design and stations. Rdio has been looking like an iOS 7-ready app for quite a few months now, thanks to a great use of blurs and music artworks as backgrounds – a design choice that is in line with iOS 7’s focus on deference and user content. In Stations, I’m impressed by the accuracy of the “Your FM” algorithm and the way it manages to regularly bring up songs that it knows I’ll like. I can’t wait to see what Rdio will do with the actual iOS 7, and I’m curious to see if they will (finally) bring back standard Recommendations, which briefly showed up for me, but then disappeared.

You can get the latest Rdio for iOS here. 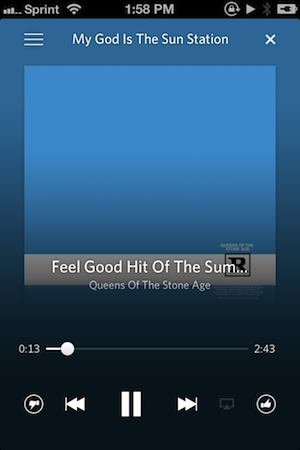 Rdio has always allowed you to play a mix of songs based on what you or your friends are listening to in their collections. Today, Rdio has updated their website and mobile apps with vast improvements to stations, allowing you to instantly listen to stations surrounding artists, songs, and genres.

Everything is a station 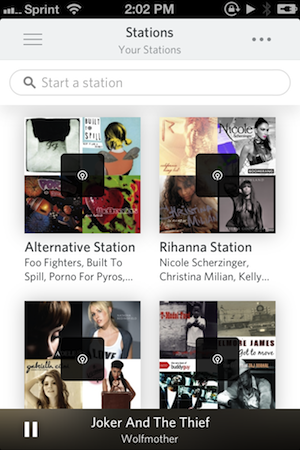 Rdio’s Stations is a response to both Spotify Radio and iTunes Radio. Drawing from a library of 20 million songs, Rdio hopes to turn anything into a custom Station. Your favorite pop radio song? That band you can’t stop listening to? By visiting Stations in the sidebar on your mobile device or desktop, you’re instantly greeted with a search bar and collections of music by your friends, stuff that’s in heavy rotation, and popular artists and genres. And no matter where you are in Rdio, you can also select songs and artists to make a station out of them as well.

Just like the music player, the Stations Player puts album art front and center over a blurred background that provides some contrast for the scrubber and other controls. New to the Stations Player are like and dislike buttons that let you vote on your favorite tracks.

You FM is the biggest new thing here, which is Rdio’s way of curating stations based on what you do across your social networks. Rdio says they’ll look at who you follow on Twitter, things you like on Facebook, and things you thumbs up in Rdio to create Rdio stations of all your favorite songs and “related tracks.” So if you follow Nine Inch Nails and have your Twitter account hooked into Rdio you’ll hear a lot more Reznor in your Stations mixes.

It’s also about your friends 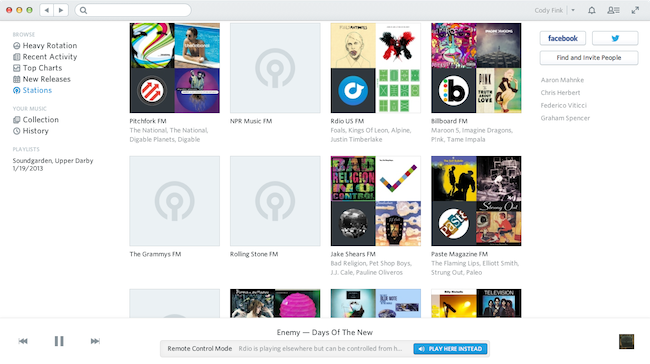 Then there’s your friends. There’s a People tab in Stations that’s supposed to highlight what your friends are listening to, which is basically their ‘You FM’ stuff. It’s the previous implementation on steroids. You’ll also find Stations in there like Pitchfork FM and Rolling Stone FM if you want indie or Top 40 Stations.

Rdio can be downloaded for free from the App Store, but requires a monthly subscription to use. Check out Rdio’s pricing here and read more about their Stations update on their blog page. 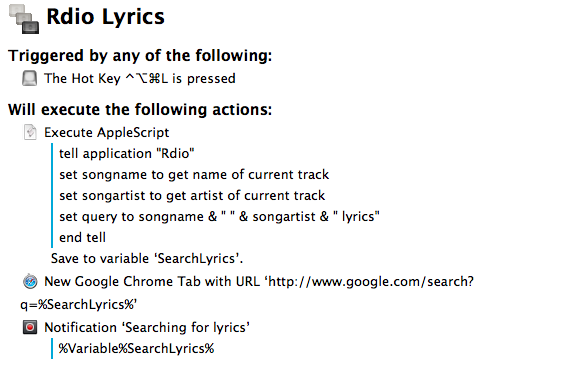 In spite of the existence of various Mac apps to display lyrics of a song that’s currently playing in iTunes or Rdio, I often find myself having to manually look them up through a web browser. It’s not uncommon to see a dedicated lyrics app being unable to fetch lyrics for a certain song, and, unsurprisingly, that always seems to happen when I’m in the mood for learning new lyrics. Having to Google lyrics and type a song’s name is a tedious process that ought to be automated, so that’s what I did. END_OF_DOCUMENT_TOKEN_TO_BE_REPLACED 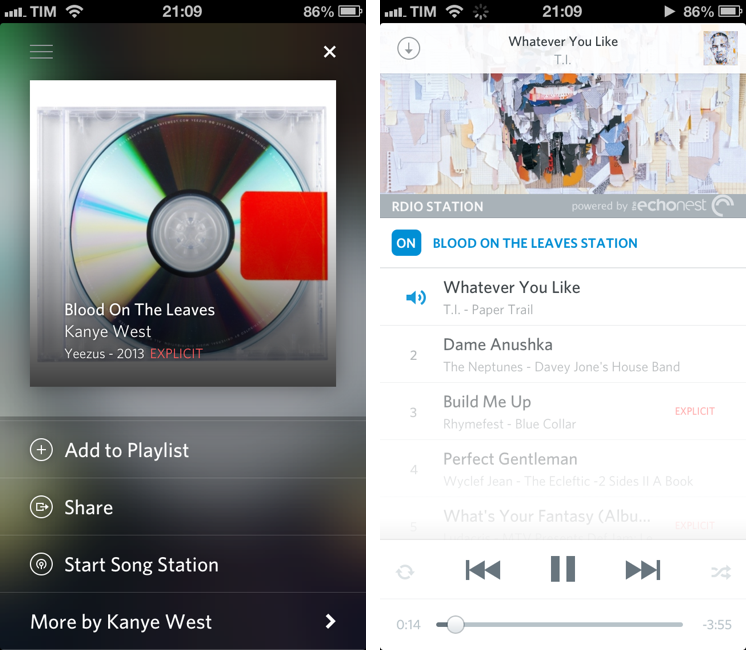 In an update released today, Rdio has added a new radio functionality to the service, called “Song Stations”. Once again, Rdio is using The Echo Nest as a backend for stations.

Song Stations can be created through the sharing menu available by tapping & holding on a song; this will launch a new station based on songs from similar and related artists, with unlimited skips and possibility to look at four upcoming songs. Unlike Apple’s recently announced iTunes Radio, Rdio doesn’t let you “vote” on songs that have been automatically selected by the service, and, right now, there doesn’t seem to be an option to save song stations either.

Alongside various UI improvements and fixes, the latest version of Rdio for iOS also contains a new AutoPlay feature to “hear more like what you’ve recently listened to” after the music you’re playing has ended. AutoPlay is available in Rdio’s Stations menu as well (accessible by tapping on the blue Stations link in the Now Playing screen). 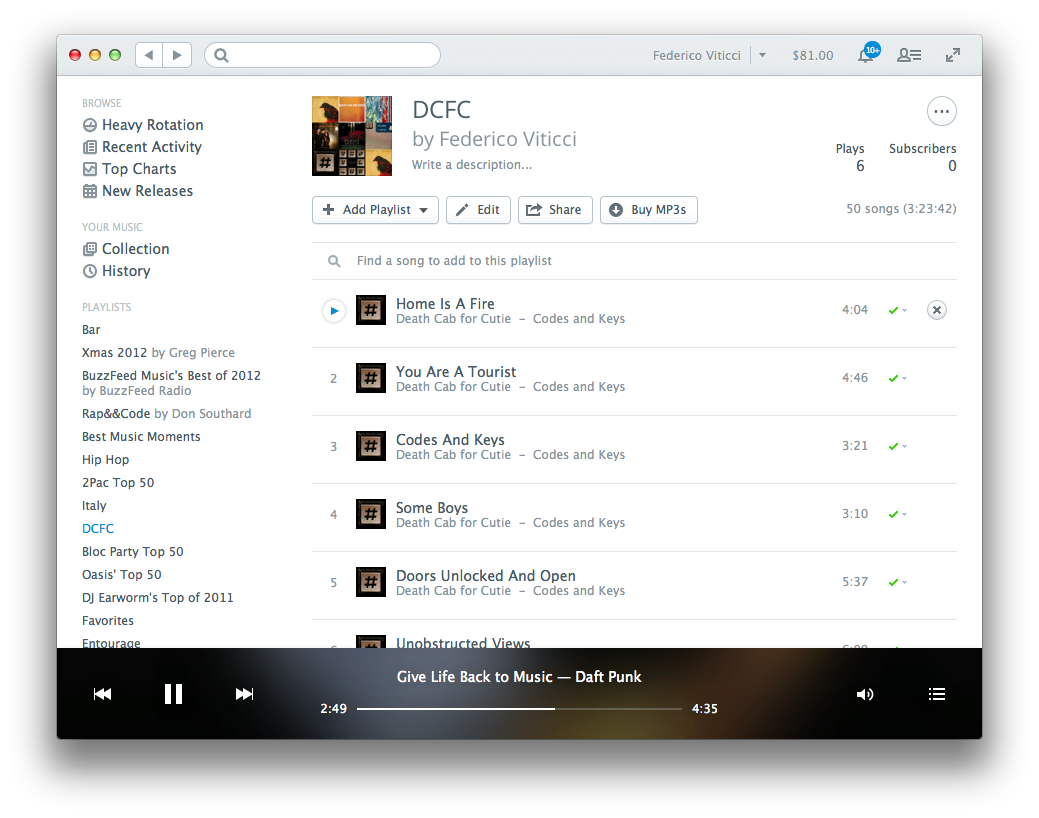 A few minutes ago, music streaming service Rdio updated its website and Mac app (which is largely web-based) with a new “bigger, bolder” player. Inspired by the iOS app’s recent redesigns, the player sits at the bottom of the window, styled with a blurred preview of the currently playing song’s artwork. As you click the list icon in the bottom right, you’ll get a larger album art view (screenshot) with a summary of upcoming songs (and a larger, blurred artwork in the background).

The new player is a big change in terms of visual appearance – it certainly is in contrast with Rdio’s otherwise clean and minimal design focused on whitespace, text, and smaller thumbnails. Last week, Rdio updated its iOS app to include a similar redesign for the sidebar.

Rdio for Mac can be downloaded here. 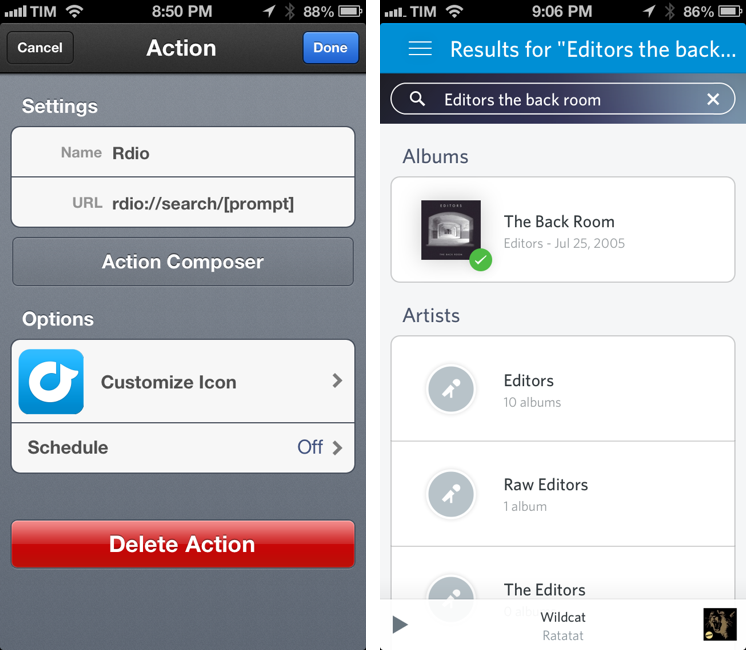 Rdio 2.2, released earlier today, includes – besides an improved interface and label search – a new URL scheme for launching searches from other apps (thanks, Adam). The URL scheme is fairly simple:

In the past, I relied on a hack made possible by Bang On to redirect Rdio web URLs to the Rdio app. The problem with that solution was that it was a finicky process that couldn’t launch full, native searches directly in the Rdio app. The new version enables just that: you can now use the URL scheme to create search actions that will display pre-populated results in Rdio for iOS.

The new URL scheme means it’s easy to set up actions that trigger Rdio searches in apps like Launch Center Pro or Drafts. For this kind of quick search, my pick is Launch Center Pro, which I already use to launch Chrome and Pinbrowser searches. Until the Launch Center Pro team adds support for Rdio search in the Action Composer (they’re aware of it), you can create a custom action with the following URL:

Then, every time you want to search for something on Rdio, instead of opening the Rdio app and manually heading to the search field you can just open Launch Center Pro, type your search terms in a keyboard prompt, and tap a button to be redirected to a search inside the Rdio app.

I’ve been looking forward to a Rdio URL scheme for search for a long time. If you don’t want to use Launch Center Pro, you can build a custom action for Drafts, Mr. Reader, or any app that supports launching other apps via URL scheme. 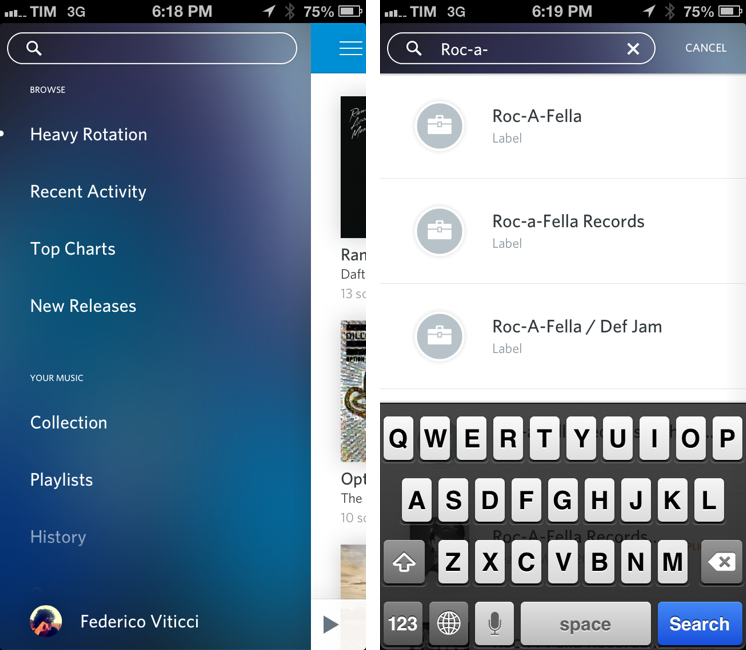 Rdio 2.2, released today for the iPhone and iPad, brings a series of important new features such as label search and improved user search, plus a revamped look for the slide-out navigation.

A feature highly requested by Rdio’s userbase, label search allows you to view top albums and artists of a specific label; if you want to see more artists or records, there are links to view a complete list – which, surprisingly, doesn’t support the tap & hold menu for quick actions that was introduced a few updates ago. 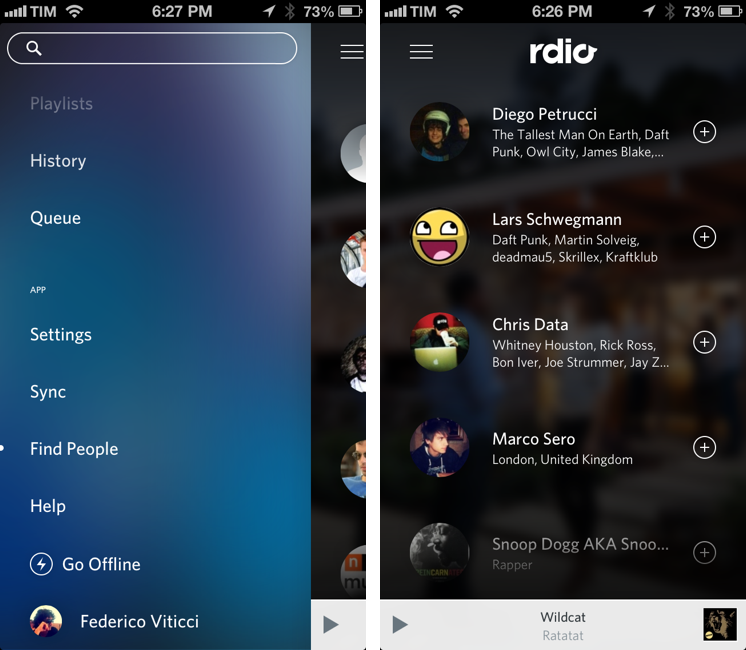 In the refreshed sidebar (also available on the iPad) a new Find People functionality allows you to find friends and artists you can follow by simply tapping on their profile pictures. It’s unclear how Rdio is determining user suggestions, but it’s likely that the service is looking into data provided by Twitter and Facebook accounts configured with it.

Today’s new version follows a series of updates that streamlined the app’s interface and enhanced its sharing capabilities. Rdio 2.2 is available on the App Store.

Improved AppleScript support in a modern Mac app isn’t something you see every day.

These are nice additions. I like how you could use the examples provided by Rdio to quickly add a song to your collection or mobile library by hitting a keyboard shortcut. 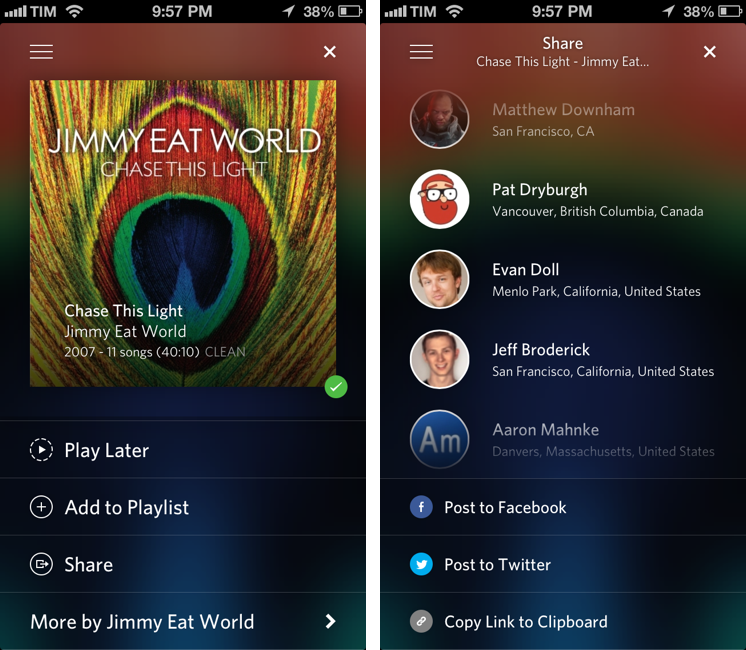 Earlier today, music streaming service Rdio updated its iOS app with a new sharing interface. Alongside the existing Facebook and Twitter options, the new sharing UI includes an updated menu to send a song or album directly to a Rdio user that you’re following: from the Share view (which was introduced two months ago), you can now tap on profile pictures of your friends, or you can use the old Twitter and Facebook sharing features, which have also been given a fresh coat of paint in this new release.

Interestingly enough, while previous design changes were made exclusively on the iPhone, this time Rdio for iPad has received the new Sharing interface in the form of a modal window (but it still lacks the full-screen album art view of the iPhone app). Items shared by your friends will appear in the notifications area on the Rdio website and desktop app, and you’ll also receive an email notification (if you have allowed the service to notify you via email); the iOS apps can share items, but they still can’t access notifications from other users.

Update: this new version also restores visibility of the iOS status bar. Personally, this is a very welcome change.