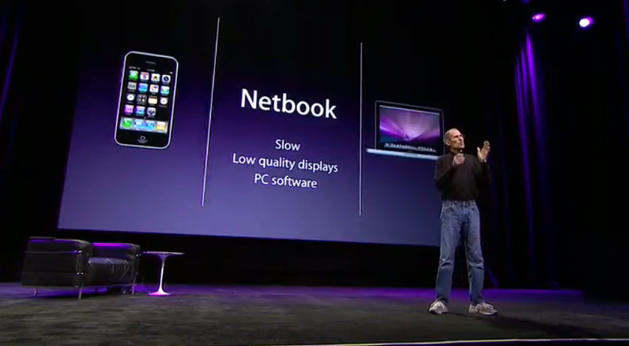 Steve Jobs, at the iPad announcement in January:

Everybody uses a laptop and a smartphone.

And a question has arisen lately: is there room for a third category of device in the middle? Something that’s between a laptop and a smartphone. And of course we’ve pondered this question for years as well. The bar’s pretty high. In order to really create a new category of devices, those devices are going to have to be far better at doing some key tasks.

According to the latest rumors we’re hearing today, Apple is going to announce a new, smaller, thinner MacBook Air on Wednesday. A 11.6-inch MacBook Air. Some people are saying Steve Jobs will revise his position and carry a new shiny netbook on stage. In my opinion, that’s not gonna happen.

If Apple’s really going to announce a smaller MacBook Air that many people could call “a netbook”, that device is going to be a “smaller, thinner, yet powerful laptop computer” in Jobs’ definition. An even faster, high-quality and lightweight MacBook Air, ultra-portable and super-usable. Something like that.

Apple is not going to release a netbook as we know it. Just like they didn’t release a regular smartphone in 2007. If the rumor’s true, I’m ready to bet on a new way - perhaps more expensive, but classy - to intend small laptop computers.