The problems over at Foxconn have been a highly discussed subject in every technology weblog, and if you consider that Apple is somehow involved in this discussion (Foxconn is the manufacturer of many components used by Apple) you realize that the problem is quite big. Apple itself has released a statement last week, in which they say that they’re “saddened and upset” at Foxconn suicides and that they’re “in direct contact with Foxconn senior management”.

But, someone decided to send an email to Steve Jobs about the matter, and he replied. An interesting discussion arose between the two, and we’ve got the exclusive conversation with screenshots after the break.

“As many of you will be aware, the Apple iPad (pictured) had its world-wide launch this weekend.

What you may not know is that the factory which produces it, in China, has been the scene of a dozen worker suicides in recent months.

We’ve been asked by unions and NGOs in Hong Kong and Taiwan to launch a big international campaign to put pressure on the factory owners – and on Apple – to probe why this is happening, and to allow workers there to have real, independent unions that can bargain collectively.

Please take a moment to send off your message now.

And please – spread the word!

Together with the forwarded email, he wrote:

Apple can do better!

“Although every suicide is tragic, Foxconn’s suicide rate is well below the China average. We are all over this.”

Now this is an interesting reply, as I wasn’t expecting the whole “Foxconn’s suicide rate is below China average” subject from Steve. As much as I know that running a huge and successful company like Apple is most of the time about numbers, any death, any loss of life is not acceptable, and shouldn’t be discussed in regards of “average” and “numbers”.

“But, see, arguments about national averages are a smokescreen. Sure, people kill themselves all the time. But the Foxconn people all work for the same company, in the same place, and they’re all doing it in the same way, and that way happens to be a gruesome, public way that makes a spectacle of their death. They’re not pill-takers or wrist-slitters or hangers. They’re not Sylvia Plath wannabes, sealing off the kitchen and quietly sticking their head in the oven. They’re jumpers. And jumpers, my friends, are a different breed. Ask any cop or shrink who deals with this stuff. Jumpers want to make a statement. Jumpers are trying to tell you something.

Also, consider this. Walmart has 1.4 million employees in the United States. Can you remember a time when 10 or 15 Walmart workers jumped to their deaths from the roofs of Walmart stores over the course of a few months? Have you ever heard of Walmart asking employees to sign a no-suicide contract, or putting safety nets up on all of its buildings? If this did happen, would you think maybe something is going on at Walmart? Or would you just say, well, 10 or 15 people out of 1.4 million is still waaaay below the national average?”

In my opinion, the whole subject couldn’t be explained better. It is such a difficult subject to talk about, that I wasn’t surprised when Apple released its statement last week. But Steve Jobs talking about China average? I am surprised. Let’s move on.

The discussion continued, and Jay sent another email:

“What does “we are all over this” mean?

As in investigating? Or who cares?

I switched a few years ago from PC to mac.

In fact when I was fired for trying to start a union, I bought my first Mac.

I always thought Apple was socially responsible. I’m even giving up smoking to be able to afford an IPad. I may have to reconsider. Especially if you are over 12 deaths. “

Clearly he didn’t understand the “we are all over this” American expression, but let’s see how Steve replied to this second message:

“You should educate yourself. We do more than any other company on the planet:

Saying that they do more than any company on this planet, he linked to Apple’s webpage about Supplier Responsability, which states:

“We insist that our suppliers provide safe working conditions, treat workers with dignity and respect, and use environmentally responsible manufacturing processes.”

“I have. Which is why I have always purchased apple products and admired you. It was the comment “we are all over this” that I found either confusing or offensive.

“It’s an American expression that means this has our full attention.

Is Apple’s “full attention” a particular attention to China average suicide rate? Like I said, the subject is difficult to discuss and we don’t want to shift the focus from what Steve wrote to morality and ethics. We just wonder if Steve is going to say something about this at tonight’s D8 conference. 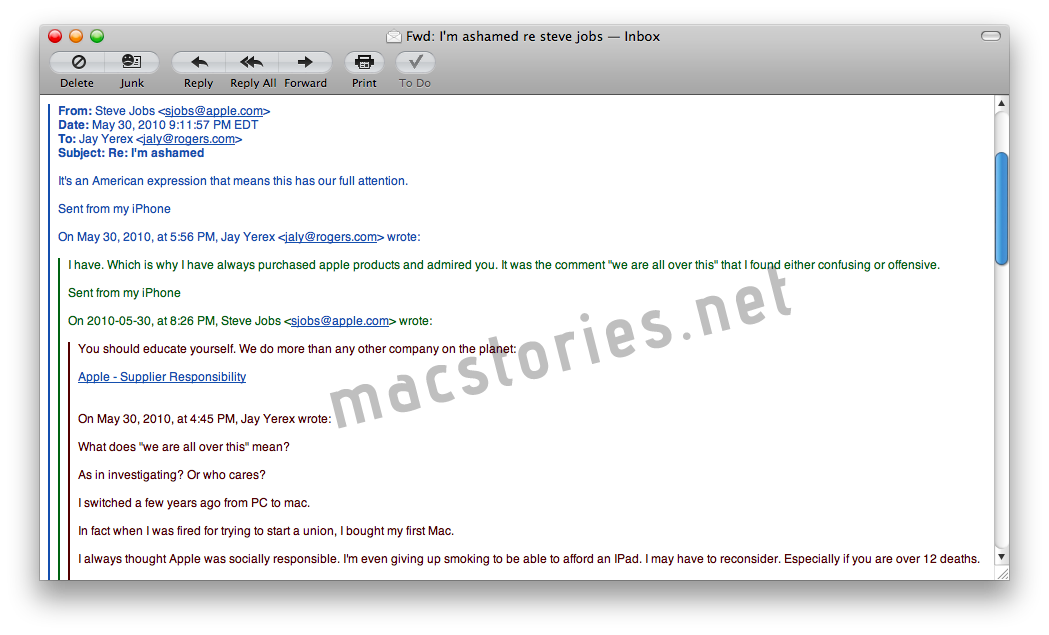