When a school goes 1-to-1 with iPad, iOS becomes the primary platform in the institution simply by virtue of sheer numbers. As a result, workflows that are difficult to execute on iOS become problematic. We experienced a situation like this where we had been using Basecamp to manage projects across the school. As time went on, Basecamp didn’t really keep up with the way our work was evolving – indeed their Basecamp iPad app only launched in the second half of this year. As a result, we ended up moving wholesale to Google Drive which, while still not perfect on iOS, is far more usable on the platform and getting better with every release.

“Open In…” integration is the fundamental mechanism by which apps like Dropbox and Google Drive can accept uploads from other iOS apps. You “Open” a document from Pages “In” Dropbox and you’re able to upload that file. Google Drive works similarly, as does Apple’s own iTunes U app for uploading course materials for students to access.

With iOS 8, a far more powerful mechanism is coming into being: extensions. The term “extensions” is being used by Apple to cover several different points of integration between apps and iOS – “extension points” in Apple’s parlance – and there are two that are particularly relevant for education.

The first is the “action” extension. Such an extension allows you to “manipulate or view content within the context of another app”, according to Apple. What does that mean? Well, in many cases it will allow developers to provide small parts of the functionality of their app to be used inside other apps. For example, being able to highlight some text in Safari and create a new Pages document with that text as a starting point or post that text to a class discussion in iTunes U - all without leaving Safari.

Many times in my experience of using iOS in the classroom, I’ve had to explain to people that “what you want to do isn’t possible on iOS”. In times past, that was often because Apple wouldn’t allow developers to build integration between their apps. Under iOS 8, developers are able to build these integrations themselves.

The second extension point that is very important for education is the Document Provider. One of the founding principles of iOS has been that the filesystem is not directly exposed to the user. I have seen first-hand the benefits of this approach: not once in four years has a student been unable to remember where they saved a file. Pages documents are in Pages, Keynote documents are in Keynote. This is in sharp contrast to my earlier experience teaching Mac OS X in which remedying document misplacement regularly ate up substantial chunks of class time.

In iOS 8, Apple is moving away from the strict siloing model of “documents live within the apps that made them” and providing users with the ability to see files that live in other apps’ document spaces–- as well as documents that don’t live within any app’s space. This is given the overarching marketing name of “iCloud Drive”.

One of the interesting extension opportunities with iCloud Drive is that Apple is offering other cloud storage services the opportunity to plug-in right alongside Apple’s own service. This is where the Document Provider extension comes in. It is entirely possible that Google Drive and Dropbox could become near first-class citizens alongside iCloud. This will make many workflows in the classroom far easier. My own school, for example, is a 1-to-1 iPad school making substantial use of Google Apps for Education and Google Drive. Right now, we can only use the slightly clunky “Open In…” mechanism. In time, the ability to work with documents directly on Google Drive could be a substantial improvement to the user experience.

There is one other kind of extension that may find a few good uses in education and that is customisable keyboards. We have found that pupils cope very well with typing on iOS but, for our younger users, the design of the iOS keyboard has a notable problem: all the “key caps” are in capital letters. Children typically learn the lower-case letters first, so here’s a free keyboard idea for an enterprising developer out there: make us a lower-case keyboard! 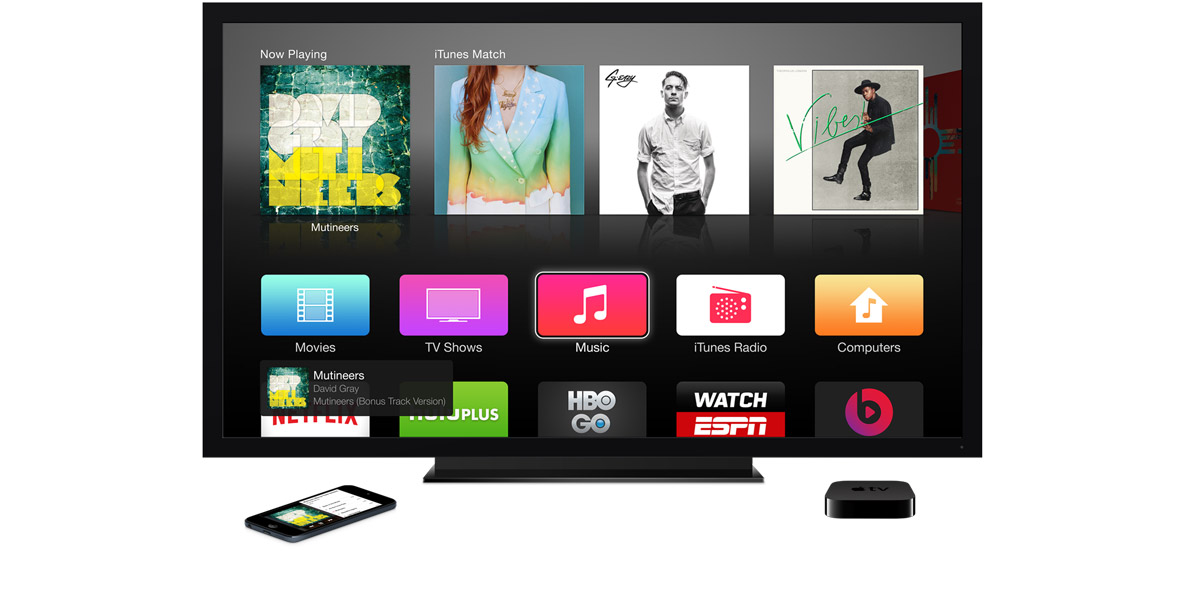 Apple TV has become something of a fixture in iOS classrooms. The ability to wirelessly mirror any content from the device to a big display in the classroom is a substantial improvement over being tethered to a VGA cable.

Designed as a home device, it hasn’t always been easy to deploy large numbers of Apple TVs in large schools with complex networks. Primarily, the technology that iOS devices use to discover Apple TVs on the network, Bonjour, didn’t scale up to large networks. This was such a problem that some systems administrators petitioned Apple to improve Bonjour for larger deployments.

Turns out, Apple decided to do an end-run around this whole problem with iOS 8. Instead of making Bonjour discovery work better on large networks, Apple has done away with the need to connect the Apple TV to the network at all.

Under iOS 8, iOS devices can discover nearby Apple TVs using Bluetooth LE. In addition to discovering Apple TVs, iOS devices can also mirror the device directly to the Apple TV without going across the institution’s network. This will be a net benefit in terms of minimising network traffic as well as – hopefully – an increase in reliability due to no longer having to rely on the vagaries of the institution’s WiFi.

There are so many other great features in iOS 8, it’s hard to list them all. I’m looking forward to the enhanced editing features in Photos, an app that all of our students make very creative use of already.

There are some nice enhancements for Accessibility that will enhance the lives of students with specific learning needs. iOS has always been streets ahead in this area and the improvements in dictation and screen reading alone will be very welcome.

Mostly, though, I’m excited to see what developers do with iOS 8. This is one of those releases that really depends on the developer community to exercise their minds around what could be possible with extensions, keyboards, and great new apps.