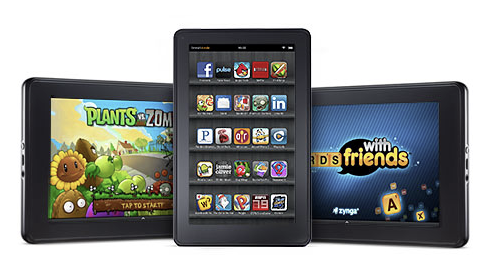 I don’t doubt that the Kindle Fire’s usability matches its bargain bin price tag. David Pogue was pretty clear when he said, “You feel that $200 price tag with every swipe of your finger.” Reviews, ranging from forgiving to absolutely scathing, are mixed. On one hand, you have Andy Inhatko who loves the crisp text and the reading experience on the smaller, 7” display. On the other hand, the founder of Instapaper finds the reading experience to be absolutely awful. TUAW and GigaOM both posted comparative guides for consumers on the fence about which tablet to buy, straddling the line that the Kindle Fire is good enough because of its price-point. There is a common consensus:

Where the reviews differentiate is with the experience of actually consuming content, which is likely what consumers want to do with a tablet integrated with Amazon’s ecosystem. Ben Brooks writes that the Kindle Fire’s three main experiences, which are reading, watching video, and web browsing, are simply poor in comparison to its polished rivals (the iPad). Erick Schonfeld on the other hand writes the exact opposite, even giving the Kindle Fire’s often lauded browser a pass. From what I’ve seen, the big tech press has been giving the Kindle mostly fair but favorable reviews, with independent writers chomping down on the lack of a polished experience.

There’s a general disagreement on whether the Kindle Fire functions well, and whether it functions well at its price point. Should the Kindle Fire, a $200 budget tablet, even be compared to the iPad? The question I get the most from family is whether they should buy either of these tablets. Android’s off the table. I think the question of whether you should buy the Kindle Fire or an iPad can be reduced to a more specific question. “Will I be generally happy paying $200 for a budget tablet, even know though I know I’d be satisfied with an iPad?” People are being price conscience, and not choice conscience (they’ve already settled on two players and would prefer the iPad, but can’t afford it).

Here’s a general list of complaints that I keep seeing pop up around the web:

The thing about the Kindle Fire is that it’s not supposed to be an Android tablet for geeks. It’s an Amazon tablet aimed at the general middle-class and at parents with children. From what I’ve come to expect from Amazon’s software experiences, I don’t know if I could recommend this tablet for that audience. The Kindle Fire apparently isn’t the most kid friendly tablet on the block. I’m afraid the UI might be too confusing to the persons I’d give it to.

Today, if you were going to ask me whether or not I’d buy the Kindle Fire, this is what I’d tell you.

Where Amazon loses me as a customer of the Kindle Fire is with their own iPad app. Lots of people are simply satisfied and happy that they can read their Kindle content on the iPad when it’s most convenient. I think it’s true that many people don’t care about the same things I care about. Reading is reading. Text is text. However, I find the just-off color schemes, the wide justified text, and the lack of good fonts simply distracting when it comes to reading Kindle eBooks on the iPad. Reading with Sepia is okay, but the overall experience isn’t good and I’m frustrated by the lack of options and the ugly UI when reading.

But where the Kindle app really gets me is with its page turns. E-Ink flashes on the Kindle Touch don’t annoy me. Tilt scrolling in Instapaper is a-okay. But there is nothing that bothers me more than the sliding animation Amazon uses in place of page turns found in iBooks (which I find to provide a better reading experience). Even when you turn those curly page turns on, they’re so laggy and disconnected from your finger that it distracts me from the reading experience. Simply based on what I’m reading around the web and what I’ve experienced from Amazon on the iPad, it doesn’t look like their reading experience is much better.

That’s how I look at it. I’m disappointed that the keystone of the Kindle brand, an excellent reading experience on everything from Kindle eBooks to Magazines, doesn’t appear to be that great.

As others have said, the price is good, the size is mostly okay (read Casey’s thoughts on the keyboard size), and it was never expected to be a stellar performer. I think the Kindle Fire looks good (just as I think the PlayBook looks good), has a great display, and will sell simply because of the potential for unlimited access to Amazon Prime’s library of video content. If you’re not as persnickety as I am and you’re willing to put up with its hiccups, I think the Kindle Fire would be an okay tablet with limitations and nothing more.

I wanted to clarify that my argument isn’t about the fluidity of UI on the Kindle Fire, or that I’m overly critical that their app experience doesn’t exactly match the iPad’s, but rather that Amazon simply doesn’t have a passion to perfect their core products. I want them to succeed and make great devices, even at budget prices. Amazon creates working software, but I feel they never truly finish the job and add the extra polish that would go a long way to delight customers. This doesn’t just pertain to animations or how pretty something looks — this pertains from everything to the UX, to how easily I can navigate what I’m using, and whether or not I’d feel happy. Where the Kindle Fire misses the mark is with reading magazines and picture books, the subpar browser, and the sometimes frustrating navigation scheme. That’s the polish I should have focused on: Make those core experiences work better.

This is how I should have worded it in the first place. Admittedly, I used a poor example instead. While I don’t like the Kindle app on the iPad, and while I do believe it’s half baked (especially as a core product from Amazon), it is unfair to make that kind of broad generalization and comparison to an entire tablet experience. I lost focus on what’s important and what would make a potential customer want to get one. Things like web browsing and reading are important to people, and Amazon made a big deal about those particular experiences which ended up not being very good. And to be fair, I’ve been much less critical of similar products in the tablet space. I do think the Kindle Fire has room for improvement, but I’ll leave the remainder of the discussion to Kindle Fire owners. Honestly, I’d love feedback from Kindle Fire owners themselves since the tech community has too many differing opinions on the subject.